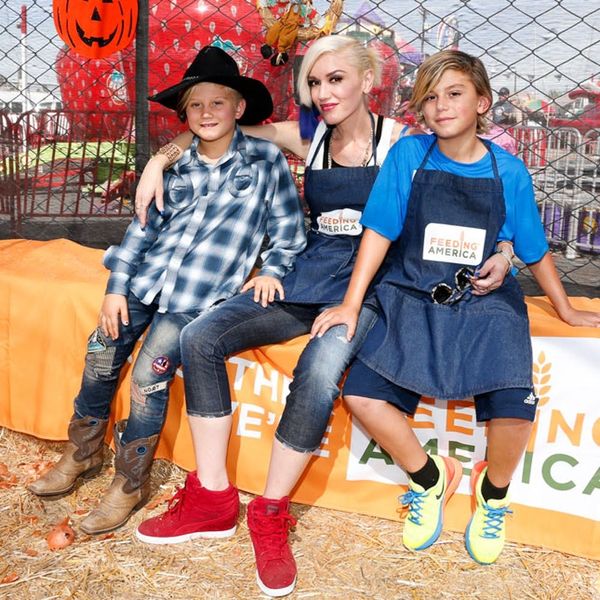 There are many shades of cool, especially when it comes to baby names, ranging from classy classics to surprising concepts. While most celebs tend to go the REALLY unique baby name route (hello, Pilot Inspektor!), a few have chosen names that tread the line between creative and unusual. Scroll on to discover 13 celebrity baby names that might just inspire your new favorite baby name.

1. ApolloBowieFlynn: We’ve dubbed the whole No Doubt band as Best Musical Group Baby-Namers, led by vocalist Gwen Stefani. After sons Kingston James McGregor and Zuma Nesta Rock came Apollo, classical god of music, truth, the sun, poetry and more. You can’t get much cooler than that.

2. Alaska: Best Uncharted Territory Prize goes to Russian model Anne Vyalitsyna, aka Anne V, who chose an unusual yet on-trend name for her daughter. With partner Adam Cahan, they became a triple-A-initial family.

3. Amélie Moon: We nominate actor Kevin Durand and wife Sandra Cho’s choice for the Sheer Beauty Award, for this luminous, moonstruck combo. Amelie, the French version of the popular Amelia, came to the US on the wings of the charming 2001 French film. Moon has become a bright new middle-name option, quirkily adorable.

4. Art: No contemporary actor is quirkier that Irishman Chris O’Dowd, so we’re not surprised that he would pick this almost comically blunt-sounding vintage nickname for Arthur. If you don’t know your Irish history, Art is the noble name borne by a number of legendary kings.

5. DeltaBell: Kristen Bell and Dax Shepard get the Most Surprising Siblings Citation for their diametrically different daughter names. First came a girl, who was given the presidential surname Lincoln in 2013, followed by the languid and lush, ultra-femme Delta, less than two years later.

6. EdithVivianPatricia: On a recent talk show, Cate Blanchett revealed the inspiration behind the names of her first three children: Roman, after director Polanski and the French word for novel, Dashiell from Dashiell Hammett and Ignatius, from a children’s Doctor Underpants book. But for her first daughter, adopted last winter, she went in an entirely different direction, combining three lovely, traditional appellations.

7. ElsieMarigold: Ioan Gruffudd and Alice Evans get the Cutest Combo Award for this double vintage choice. Elsie, until recently a dusty old Elizabeth nickname, is in the process of being polished up — it’s reached Number 32 in England and Wales. Marigold is a fresh new flower in the name garden. This latest little Gruffudd shared the El-beginning of her name with sister Ella Betsi.

8. Ophelia: Foo Fighter Dave Grohl, who was ahead of the starbaby pack with older daughters Violet Maye and Harper Willow, now gets the Best Shakespearean Choice Prize for using the lovely name of Hamlet’s tragic heroine.

9. PoppyLouise: We wouldn’t expect you to name your kid Gramps or Pop-pop, but Jenna Bush Hager was fortunate (and clever) enough to use the childhood nickname of her great-grandfather, George H. W. Bush, as the trending name of her second daughter. The middle name Louise, another family honor name, makes a nice, gentle counterpoint to the peppy Poppy, making this the Most Perfect Tribute Name.

11. Valor: There are any number of virtue names for girls, but very few for boys. Actor Emile Hirsch managed to make this bold choice for his son, a name that had previously been seen only in comic books.

13. ZephyrEmerson: This light and breezy name of the Greek god of the west wind was the interesting choice of tech entrepreneur and Facebook founding president Sean Parker, who also named his first daughter Winter Victoria.

What’s your favorite celeb baby name? Let us know in the comments below!