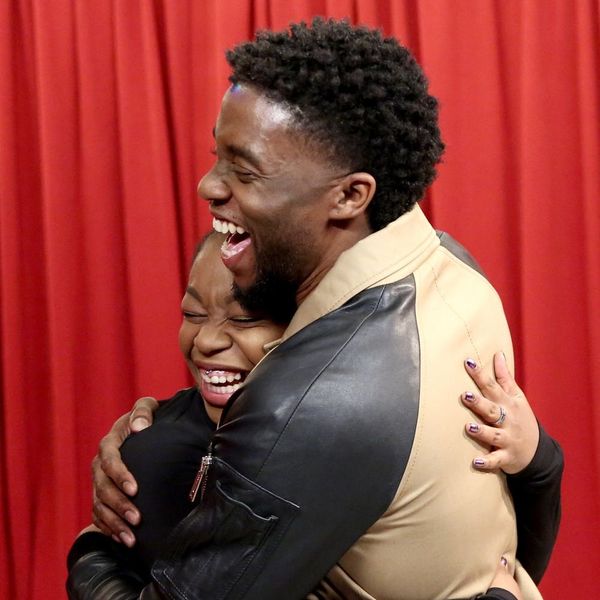 Pretty much everyone who’s seen Black Panther has loved it, not only because of the action, but also because of the movie’s cultural significance. Director Ryan Coogler wrote a note to thank fans for their response to the film, and now star Chadwick Boseman — who plays T’Challa, the king of Wakanda — is showing his appreciation in person.

With help from Jimmy Fallon and TheTonight Show, a few individuals were given the chance to tell Boseman from afar (or so they thought) what the movie meant to them.

“I cannot tell you how much it means to have you step into the role as our king and be holding it with such grace and poise and joy,” one woman gushed. Another said, “As a creator, as an entrepreneur of color, just seeing this movie made me realize that our stories need to be told. There’s so many of us out here who are trying to create great things, and I was just so inspired as someone who wants to make movies someday and who wants to inspire people, that art can really change the world.”

One mom, who was there with her teenage son, said, “For me, as the mother of a young son, my son’s childhood has been defined by Barack Obama and now Black Panther. So, thank you.”

The fans’ words were incredibly moving on their own, but the whole scene got even more emotional when Boseman himself stepped out from behind a curtain to surprise them. There were hugs and tears all around.

Boseman took to Twitter to address the experience, saying, “The #Wakanda love runs deep on @FallonTonight. #BlackPanther.” He added, “Loved every minute of this.”

It’s pretty clear that the fans loved it, too. And so did we.

Desiree O
Desirée O is a ‘Professional Bohemian’ who loves anything and everything related to the arts, entertainment, and pop culture. She ADORES being a ‘Newsy’ for Brit + Co, covering all of the latest tidbits of awesomeness that you want to read about. When she’s not writing, she’s either making messy art, going on long adventurous walks with her camera, or poking around over at bohemianizm (http://www.bohemianizm.com/). You can find out about Desirée O and her work at http://DesireeO.com/ or follow her on Twitter @DesireeO.
Movies
TV
Movies