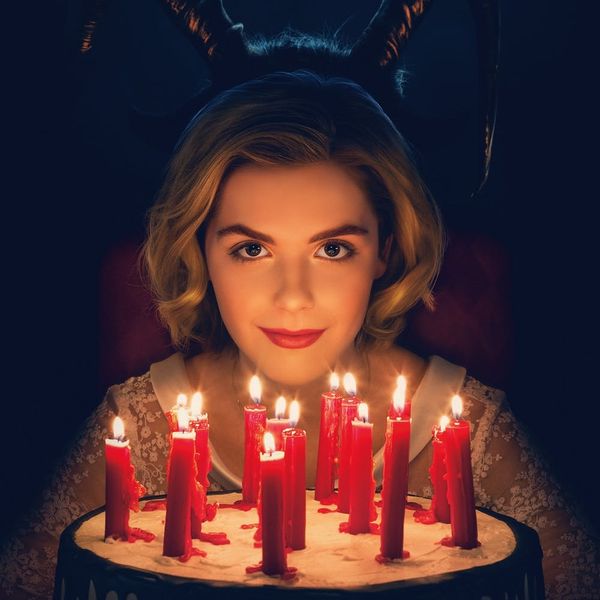 Chilling Adventures of Sabrina is set to premiere on Netflix on Friday, October 26, and by the looks of the new trailer, this series will be the retro-supernatural thriller of your dreams (or nightmares).

Mad Men actress Kiernan Shipka is stepping into the role of Sabrina Spellman for the series, which puts a spooky twist on the classic Archie Comics character. While Sabrina appears to live an idyllic life in Greendale, “where it always feels like Halloween,” she faces a difficult decision when her 16th birthday comes around. The half-witch, half-mortal must choose between two worlds: “the witch world of her family and the human world of her friends.”

There are several factors to consider, of course, including her doting boyfriend Harvey (Ross Lynch), her aunts Hilda and Zelda (Lucy Davis and Miranda Otto), and a few less conventional things like magic, demons, and séances. (As if high school isn’t hard enough.)

Although Sabrina seemingly makes her decision in the trailer — refusing to add her name to the Devil’s Book and rejecting the coven — it’s obvious that leaving behind her witchy life won’t be easy, especially when evil forces threaten everything she knows and loves.

The series comes at a perfect time for Shipka, who has said she was “frustrated” with her options after Mad Men. When Sabrina came along, “I was like, Oh my God, this is heaven,” she told Vulture. “I’m obsessed with everything about it.”

Are you excited for Chilling Adventures of Sabrina? Let us know @BritandCo!

Desiree O
Desirée O is a ‘Professional Bohemian’ who loves anything and everything related to the arts, entertainment, and pop culture. She ADORES being a ‘Newsy’ for Brit + Co, covering all of the latest tidbits of awesomeness that you want to read about. When she’s not writing, she’s either making messy art, going on long adventurous walks with her camera, or poking around over at bohemianizm (http://www.bohemianizm.com/). You can find out about Desirée O and her work at http://DesireeO.com/ or follow her on Twitter @DesireeO.
Fall TV
TV
Fall TV Netflix TV
More From TV