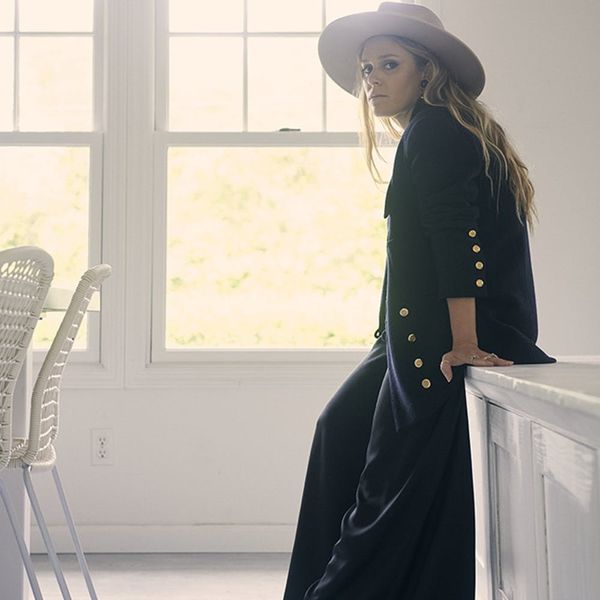 Women’s careers don’t need to follow any kind of set path anymore, and they definitely don’t need to come to a halt after starting a family. Cinq founder Sasha Benz is proof of that and then some. The blogger-turned-mom-turned-creative director-turned entrepreneur and CEO wears all the hats (just check out her Instagram where she wears one gorgeous beachy hat or another). Her most recent venture, Cinq, a digital business card app that stores a person’s contact information and social handles all in one convenient place on your phone, has the power to totally revolutionize networking in the social media era.

Sasha Benz kicked off her career as a stylist in the editorial world, which led to the opportunity to start her own blog, All My Friends Are Models. Her work building up her blog (and rubbing elbows with some serious VIPs) got her noticed, and she earned the Creative Director spot at The Surf Lodge in Montauk, NY. The whirlwind of meeting a ton of people, collecting stacks upon stacks of business cards, and following up with those new connections sparked Cinq.

Brit+Co: What was the major catalyst for you to create Cinq?

Sasha Benz: Cinq was built out of necessity. I am a mother of two tiny humans, I have four careers and seven emails, so I have no time for error. That’s what was happening with my contact book. I was meeting people and couldn’t find contacts, and was getting bouncebacks to emails. If I wasn’t going to build this app, someone else needed to. This venture really excited me because it was so out of the depths of anything I’ve done.

B+C:How do you keep tabs on all your businesses and your kids on a daily basis?

SB: I would love to say that any day is the same — it’s hard to be an organized person when life throws me these curveballs every single day. I jump from hat to hat to hat, but all the projects I work on complement each other. The key is that I try to be highly organized and really balanced between my projects. It’s like a bunch of different tabs on a computer are open in my brain and I have to switch from tab to tab. I recently listened to a podcast, and before it was over there were tears streaming down my face because it was talking about the fact that to be focused on something, you have to be completely, whole-heartedly focused on it. If you’re with your kids, put everything aside and be with them. Be present in that one thing. I try not to think about two things at once. It’s an art.

B+C: What’s your go-to power piece you put on when you want to feel like a boss?

SB: I have this blazer that was the first designer piece I ever bought. At the time I probably should have spent the money on something else, but I wanted to splurge. I sometimes just wear it to remember where I’ve been and the achievements along the way, like my own little Super[wo]man coat.

B+C: What makes the Cinq team mesh so well together?

SB: It’s been such a perfect team from day one: Everyone has their individual strengths, and we are so strong when we come together. Even though I came in as CEO, I had a board of advisors, many of whom came from a tech background, right off the bat, which is kind of unheard of for a startup company. We learn from each other every day, because what I’m experienced in, none of them have experience in, and vice versa. There’s a humbleness about the team: All of us are equally passionate about this dream coming to life. We understand that we might make the wrong decision in marketing the app sometimes, but learning from that is necessary for the dream to come to life, and that’s a really positive environment to grow in.

B+C: How can entrepreneurs make use of Cinq to further their connections?

SB: Cinq is bridging the gap between all our different social identities, since everyone now has multiple channels they have a presence on. It just cleans that up and gives people the opportunity to hold this digital business card. This method doesn’t leave room for error; you don’t lose communication with anyone. I meet a lot of highly recognizable people, and often I’ll give them my phone number or email, but I’d like to also connect on Instagram. In life and relationships, you have different ways of connecting with people and should be able to choose how you want to communicate — you shouldn’t be limited to one area.

B+C: What are some of your goals for the app?

SB: Our dream that we have for the app is that you’ll be in a business meeting, or party, and not ever have to take your phone out — the app will just show you who’s in your vicinity that night and you’ll have the option to add them as a connection. We’re also working on a feature where you can search and connect with people in your field [rather than simply connecting and exchanging contact information with the person once you’ve already met.]

B+C: Who is a female entrepreneur who’s inspired you?

SB: In this day and age, she might not necessarily be called an entrepreneur, but my grandmother is one of the most incredible humans I have in my life. Back in the day, she was a working mother with four kids and had her own business. She started a record store, and lived in South Africa, where there were all these limitations to running her business, like laws against selling certain music, along with the demands of being a female business owner and mother. She always kind of stepped outside the box and has a gift of connecting with others. She’s actually the one who taught me about using Whatsapp, and was using a Blackberry before anyone else I knew was. She communicates with all her grandchildren through all these different platforms too. I think that’s inspirational, to be so willing to be progressive, instead of thinking, “I’ll let the next generation handle that.” She’s always gone ahead of the times. That, for me, is just a goal: to have equal time for progression and family life, and to do it without a sweat.

B+C: What guidance would you give other women trying to break into a new industry, or change their career path?

SB: Stop worrying about failure. Everyone fails. Even if you’ve got something to lose, just really follow your dreams instead of saying, “I wish I did x, y, or z.” Don’t be worried about what other people think while trying to do something new or juggling multiple projects. Learn to sleep less too. People need to survive on less sleep.

What’s been your biggest networking win? Tell us @BritandCo.

Mara Santilli
Mara Santilli is a freelance writer based in New England. Her work has appeared in several publications, including Shape and Marie Claire. When she isn't writing, she can be found munching on any piece of dark chocolate she can get her hands on, plunking out her favorite acoustic songs on the guitar, and finding the cheapest Broadway tickets possible. Follow her adventures on Instagram to see where she's headed next.
Career Advice
Work
Career Advice Creativity Entrepreneur Girlboss Instagram
More From Work