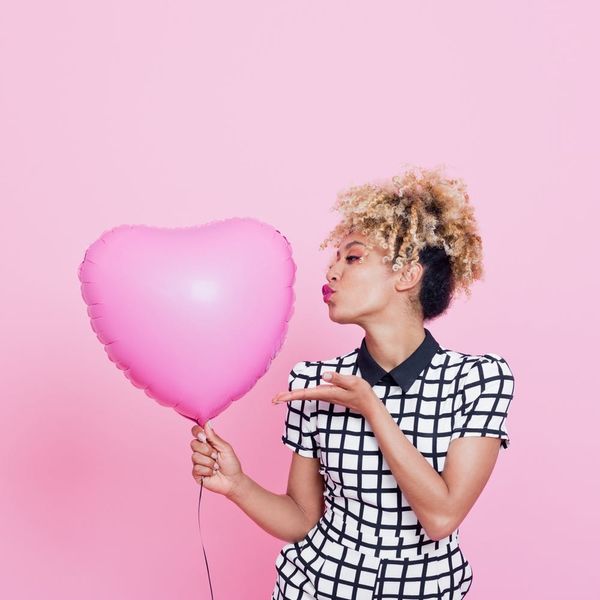 Depending on your relationship status, how many romantic comedies you’ve watched over the years, or how much you actually enjoy the taste of conversation hearts, Valentine’s Day can hold different meanings for you. Some individuals tend to be excited about all the hoopla, but there are, of course, plenty of us in great relationships who aren’t especially excited to indulge in what can often feel like a day of forced sentimentality. In fact, the expectations around Valentine’s Day can sometimes seem so impossibly high that skipping it altogether can feel like the best (and the easiest!) thing to do — S.O. or not.

Yet, in a new survey of single men and women from dating app, Coffee Meets Bagel, the Valentine’s Day pressure has cooled in recent years. This is largely because the idea of going on a first or “still new” date on February 14 is becoming increasingly less of a thing. (Yes, you read that right.) It was, at one time, perfectly normal for singles far and wide to scramble for a date on Valentine’s Day just for the sake of having one. Well, we’re happy to report that this is no longer the case.

According to Coffee Meets Bagel co-founder and COO, Dawoon Kang, “Singles no longer feel much societal pressure to be something they are not on Valentine’s Day.” In fact, the exec herself is encouraged by the data. “I think it’s so great that singles feel empowered and free to be what they want to be instead of conforming to the [expectations] of what needs to happen on Valentine’s Day,” she says. (Can we get that on a conversation heart?)

Kang credits much of this to the shift in relationship statuses among the population. “Now there are more single adults than married adults,” Kang says. “As the single population grows, more people are feeling okay owning and enjoying their single life, which is probably why there is less pressure to have a date on Valentine’s Day.”

Of the survey’s 650 single respondents in 2018, 72 percent of them (both men and women) say they do not feel pressure to have romantic plans on Valentine’s Day. In a similar survey by Coffee Meets Bagel in 2013, 60 percent of men and 50 percent of women said they did feel pressure around the occasion. While Valentine’s Day does continue to be an annoyance for many of us, these numbers demonstrate that we’ve made some solid progress! The stigma that once existed around not having romantic plans is on its way out.

This same change applies to those who are coupled up. Even people who expect to have a valentine are setting their sights on a more laid back and low-key celebration. Per the results, 39 percent of singles say they would most like to celebrate with dinner, while 22 percent say they would prefer “an evening relaxing at home.” Five years ago, the most preferred mode of celebrating — a special activity (like wine tasting) — was decidedly more formal. See? The lovestruck are slowing their roll too!

Regardless of your current status, Kang has a healthy Valentine’s Day reminder for everyone. “[It] doesn’t have to be about romantic relationships,” she says. “Let’s think about all the valentines in your life — the people you love and want to let them know how much they mean to you. I’m sure they will appreciate hearing from you on Valentine’s Day!”

How are you planning on celebrating Valentine’s Day? Let us know @BritandCo!