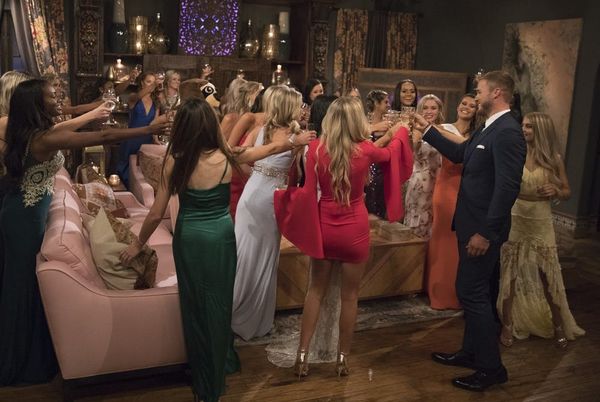 Even non-Bachelor fans have probably heard by now that season 23 star Colton Underwood is a virgin. It’s been joked about on the show’s posters, and Underwood has had to address it in plenty of interviews. And if fans thought that the conversation would finally be over once the season started, it looks like that’s far from the case. Underwood’s virginity is likely going to be a main point of discussion for the entire season — and that’s not a good thing.

It’s hard to imagine that if a Bachelorette star were a virgin, her sexual history would be such a big part of the show. And yet, the season 23 Bachelor premiere featured all kinds of uncomfortable remarks about Underwood’s sexual past.

In many of the contestants’ video intros, and even in their first conversations with Underwood, his virginity was all that anyone could talk about. Hannah B., for instance, said that the Bachelor’s virginity status was “super appealing” to her — but she also said that she wondered “how” he was still a virgin. And when Caitlin got out of the limo, she popped a balloon shaped like a cherry.

Demi, meanwhile, said that Underwood’s virginity status was “kind of concerning.” She went on to call herself “confetti cake” — whatever that means in an implied sexual context. And upon first meeting Underwood, she told him that she hadn’t dated a virgin since she was 12. (It’s hard to imagine what she meant by that without things getting really awkward, really quickly.) To top it all off, Demi told the other contestants that she “had to” bring up his virginity when she met him.

Underwood, for his part, told host Chris Harrison in the intro that there’s a “stigma around being a virgin” in modern society. He added that fans might think he’s “not romantic,” or that he wouldn’t be a good Bachelor. And instead of reassuring him, Harrison joined in on the pile-on, saying that some people might say he’s “not a man.”

It shouldn’t bear repeating, but Underwood doesn’t need to have sex with anyone to be a man. (And that’s true regardless of how conventionally attractive he is, as the contestants have noted.) Even though he wasn’t stating it as his own opinion, those words should never have come from Chris Harrison’s mouth in the first place.

Aside from the fact that Underwood’s virginity is his business and his business alone, the implication that he isn’t man enough because he hasn’t had sex is, quite frankly, dangerous. In a political climate where the word “incel” has become a household term, suggesting that being a 26-year-old virgin is something to be ashamed of is only furthering a culture of toxic masculinity.

There’s nothing wrong with Underwood because he hasn’t had sex. But in a lot of ways, it feels like The Bachelor is only furthering the “stigma” that Colton himself mentioned. And if his lack of sexual experience is that much of a concern to some of the contestants, well, maybe they’re the ones who aren’t ready for a committed relationship, not him.

Sex is a part of relationships, and it’s worth discussing as the season goes on. But having so many people make jokes and express their concerns about Underwood’s virginity in the first episode isn’t a good look. If the premiere is any indication, this is going to be a very long, and very cringe-inducing, season of The Bachelor.

What do you think of The Bachelor‘s virginity conversations? Tell us on Twitter @BritandCo.

Meghan DeMaria
Meghan is a freelance journalist based in New York City. She is obsessed with TV, especially sitcoms. She's previously worked at Refinery29 and TheWeek.com and has written for Bustle, Women's Health, and more. When she's not writing, Meghan can be found looking for the best pulled pork New York has to offer.
Feminism
Gender Issues
Feminism The Bachelor
More From Gender Issues