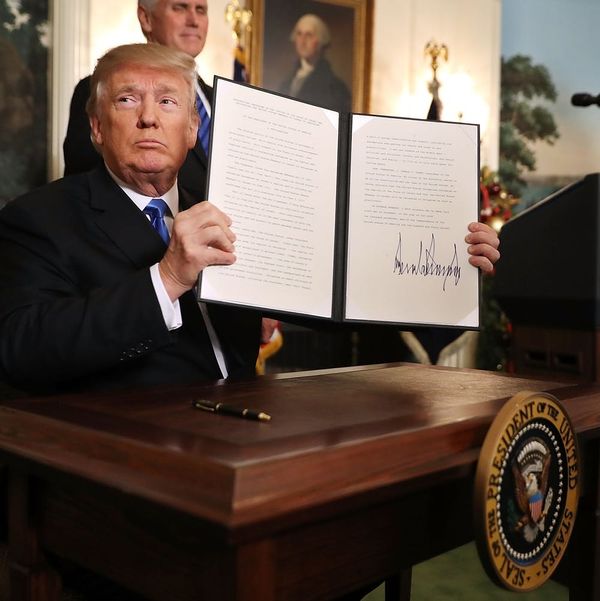 President Donald Trump announced Wednesday the United States’ formal recognition of Jerusalem as the capital of Israel, a move that has already drawn near-universal condemnation from international leaders.

Trump also announced his plan to move the American embassy from Tel Aviv to Jerusalem. The plan fulfills a 2016 campaign promise, one that appealed in particular to the president’s evangelical Christian base and pro-Israel American Jews, including casino magnate Sheldon Adelson, who donated $25 million to the 2016 Trump campaign.

In his announcement, Trump referred repeatedly to the Jerusalem Embassy Act. Passed by Congress in 1995, the Act allocated funds to finance the embassy’s move from Tel Aviv to Jerusalem. Though the Act was never implemented by Clinton, Bush, or Obama, the sitting president must currently sign a waiver every six months to keep the embassy in Tel Aviv.

Jerusalem has long been the lynchpin in the Israeli-Palestinian peace process. East Jerusalem was annexed from Jordan by Israel in 1967 but is not internationally recognized to be part of the Israeli state. Palestinians want the city to be their future capital, while Israelis already claim it as their own. The 1993 Israeli-Palestinian Peace Accords state that a final resolution on the city will be discussed in future talks. The international community has respected the city’s ambiguous status for decades in an effort to quell violence in the region and move the peace process forward.

The BBC reports that leaders in the Middle East and beyond have been quick to decry Trump’s decision, warning of a peace-process meltdown and the potential for renewed violence in the region. They warn that the decision will destroy any pretense of the United States as neutral arbiter in the peace process.

In a statement that seemed aimed directly at Trump, the Pope prayed that the city’s status as “a unique city, sacred to Jews, Christians and Muslims, where the Holy Places for the respective religions are venerated” should be “preserved and strengthened” and that “wisdom and prudence prevail, to avoid adding new elements of tension in a world already shaken and scarred by many cruel conflicts.”

Statements from Jordan, Britain, Turkey, Egypt, Iran, and China echoed the sentiment that the move was a really, really bad idea. Israel applauded the decision and encouraged other nations to follow suit.

Trump was adamant in his announcement that his administration remains committed to helping facilitate a peace agreement. He has put his son-in-law and advisor Jared Kushner in charge of these negotiations and has in the past referred to the brokering of a lasting peace between Israel and Palestine as “the ultimate deal.”

Tell us what you think @BritandCo.

Lia Grainger
Lia Grainger is a freelance journalist and reluctant nomad who divides her time between Canada and Spain, weather dependent. She's written for The Atlantic, Reader's Digest, the Toronto Star and other print and online publications, and her work appears in dozens of languages around the world.
Controversy
Politics
Controversy