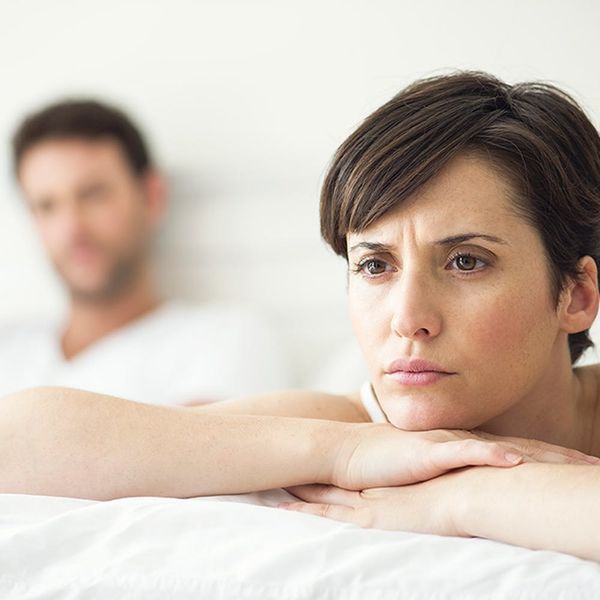 Aside from the dreamy dinner dates and romantic getaways that come with finding that special someone (LOL to a perpetual honeymoon phase), a deep, authentic emotional connection is the core of a strong relationship — at least it should be. After all, when you picture your perfect love story, there’s a lot more to it than just roses and chocolate. There’s meaningful communication too — and when you’ve found that forever person, that meaningful communication is supposed to happen through the good times and the bad. If you’re in a happy marriage or serious, committed relationship, you probably feel like you and your partner have it pretty dialed in. And you could be right!

Sadly, though, there are plenty of couples who aren’t as truly emotionally connected as they think they are — and the results of a new study from Southern Methodist University prove it. Extensive findings were published in the February 2018 issue of the peer-reviewed journal Family Process, but the gist is that people are less reliable at recognizing their significant other’s emotions when those emotions are of the negative variety.

The 51 couples who participated in the SMU study were tasked with completing daily diaries about their moods and their partner’s moods over the course of a week. Unlike many studies, this one didn’t involve any lab interviews, focusing instead on the so-called “normal” emotional ups and downs typical of pretty much any couple living their day-to-day lives.

Based on the finished diaries, researchers concluded that people can pretty accurately identify an S.O.’s happiness and excitement, but that they’re not so great at accurately identifying anger, hostility, sadness, or fear. Instead, they tend to “assume similarity,” which basically means that they project their own negative feelings onto the other person, missing the real problem at hand. Based on these findings, overt emotional reactions like crying might be necessary if you really want your significant other to connect the dots on your genuine emotions.

The SMU results are upsetting, but therapist Kimberly Hershenson says her experience working with couples IRL reflects these findings. When you get right down to it, the phenomenon illustrates a basic communication issue — a highly emotional one, but a communication issue nonetheless.

“The biggest issue I deal with in counseling couples is miscommunication,” Hershenson tells us. “One person often assumes how their partner feels about something, acts on their instinct without checking in for confirmation, and then a fight ensues because the instinct was incorrect.”

The problem of identifying emotions has become all the more tricky, she says, because of the ways that we’ve been conditioned by society to show our feelings and operate in romantic relationships. Men are taught not to be emotional, while women learn from a young age that they are not supposed to “complain” to a significant other. Combine these factors with the potential for miscommunication that exists in any relationship, and you have a recipe for emotional misunderstandings.

One key lesson to be learned from this study is that it’s not always enough to be sympathetic. Doing so might lead you to misunderstand your partner or to assume that they feel the same way that you do about something. Instead, Hershenson urges couples to pay close attention to each other and to ask clarifying questions. Say “What do you need from me?” instead of acting how you believe they want you to. You might also want to set aside specific times of the day or week when you and your partner can touch base about life so that your real emotions can be discussed before they get bigger and harder to talk about.

“People do not want to feel alone, whether it’s regarding their feelings or beliefs,” Hershenson says. “Part of having a strong emotional connection is understanding your partner, being able to empathize with your partner, and supporting them.”

Is your partner good at accurately recognizing your emotions — even the negative ones? Tweet us @BritandCo!

Alli Hoff Kosik
Alli Hoff Kosik is a freelance writer who is passionate about reading, running, rainbow sprinkles, her lipstick collection, watching embarrassing reality TV, and drinking pink wine. She lives in Brooklyn with her husband and (in her dreams, at least) three golden retriever puppies. Listen to her talk books on The SSR Podcast.
Dating
Relationships
Dating Love Relationship Advice Study
More From Relationships