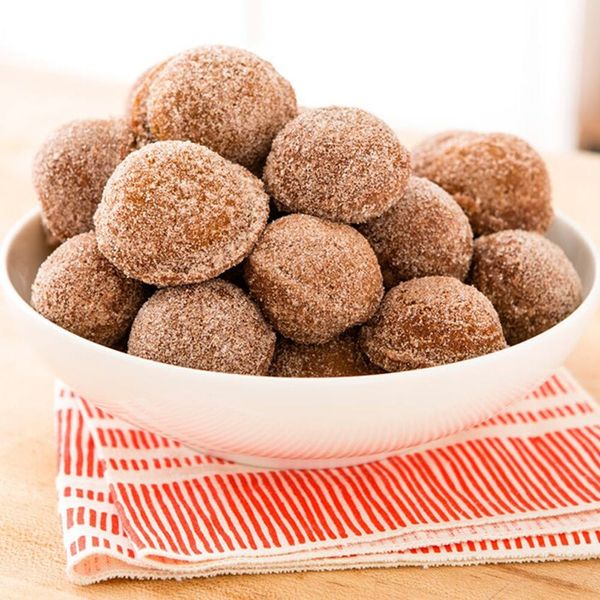 They say “an apple a day keeps the doctor away,” but eating the same thing over and over can get downright boring. With apples being ripe for the pickin’ right now, we’re thinking of more and more creative ways to get in our daily dose. From boozy ciders to edible art, put away the pumpkin recipes and check out these inventive ways to get your fix of our fave fall fruit.

1. Apple Cider Donut Holes: These small fall bites are a must-make for your next party. Made with both applesauce and apple cider, they taste even better when they’re dipped in cinnamon sugar. (via Snapguide Team on Snapguide)

3. Bourbon Spiked Apple Cider: This simple drink pairs especially well with a warm fire and a good book. With anise, lemon juice and bay leaves, it elevates your usual apple cider. (via Outerlands SF on Snapguide)

4. Apple Crumb Pie: With a homemade crust, over two pounds of apples and an oatmeal crumb topping, this pie is a total crowd pleaser. In fact, you should make this… and then invite us over. (via Joseph Feiertag on Snapguide)

5. Apple + Brie Grilled Cheese: There is nothing more comforting on a rainy day than grilled cheese. Fancy up the classic comfort food with a few slices of brie, some fresh apple and a herb butter crust. (via Snapguide Team on Snapguide)

6. Apple Halwa: This classic Indian sweet dish is made with softened apple slices that have been cooked with sugar, cinnamon and a slew of spices. Served both warm and cold, it tastes even better when garnished with chopped nuts and a whipped pistachio topping. (via Kathy Gori on Snapguide)

7. Apple Bombs: True to the name, this apple dessert is BOMB. Filled with whipped cream and drizzled with white chocolate, these teeny apple treats are perfectly portion-controlled for an after dinner dessert. (via Michael Daher on Snapguide)

8. Apple Infused Pork Loin: This dish owes its flavor to, get this, apple juice injections. Yup, you heard us right. The added apple juice keeps the meat tender and moist from the inside out. (via Destination Cuisine on Snapguide)

9. Apple Swan: Discover how the ordinary granny smith apple became a swan. With a small pairing knife and this guide, you’re on your way to making the cutest edible art decoratives for fall. (via Ynon Dvir on Snapguide)

10. Applesauce: Tired of the store bought stuff? Try out this recipe for chunky applesauce flavored with molasses, cinnamon, rum and ground cloves. Because let’s face it, everything tastes better when it’s homemade. (via Jody Wagstaff on Snapguide)

11. Bleeding Halloween Candy Apples: Trust us, they’re safe to eat. These candy coated creations use black and red food coloring to give the apples their “bleeding” outsides. (Elizabeth Wiley on Snapguide)

12. Loch Ness: This drink gets its name from the smokey Scotch used in the recipe. But it’s the addition of apple cider, lemon and freshly grated cinnamon that give it a signature fall flavor. (via Third Rail on Snapguide)

13. Crustless Apple Pie: Crust haters, we’ve got you covered. With carmelized apples, almonds, walnuts and a whipped pistachio cream, this recipe has all the filling you want and none of the crust you don’t. (via Kathy Gori on Snapguide)

14. Parisian Apple Tart: Inspired by the iconic apple tarts in Paris, this dish pairs a crisp almond paste pastry shell with a buttery apple filling. It can be served on its own, but it’s even better à la mode. (via Sonia Fares on Snapguide)

15. Barley Apple Risotto: Apple dishes don’t always have to be sweet. This barley and apple risotto, made with a pint of Irish stout, is a savory-sweet update on a classic dish. (via Jody Wagstaff on Snapguide)

Have a favorite apple recipe of your own? Share with us in the comments below!