12 of the Craziest and Most Creative Runway Shows 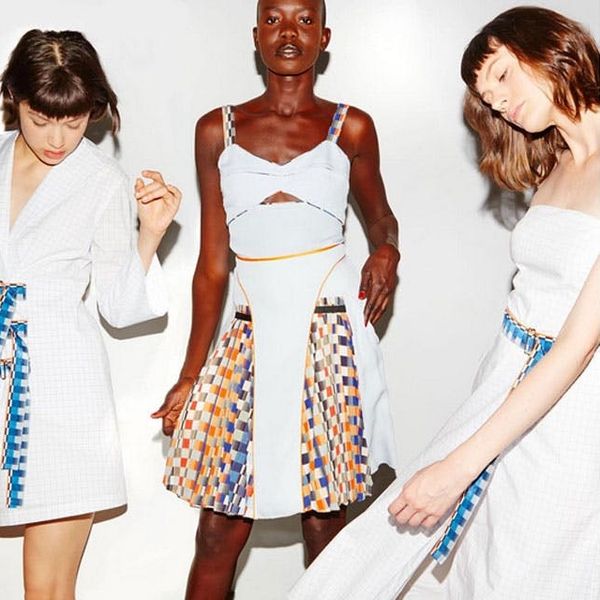 Fashion shows are thrilling, but it’s the attention to detail that really makes a show spectacular. While most designers do little more than send their designs down the runway to a sick soundtrack of customized remixes, we love when they go all out. This NYFW Spring 2016, there were plenty of designers, both seasoned and new to the game, who didn’t hold back. From an island oasis to a larger-than-life meringue, these 12 labels prove that presentation is everything.

Over the years, Tommy Hilfiger has become well known for his fun, out-of-the-box shows. From Glastonbury and Woodstock-inspired grounds to an armory-turned-football-field setting, creating the ultimate backdrop is no joke for the American designer. For Spring 2016, he whisked us off to a carefree, tropical island, complete with a boardwalk, lagoon and beach bar.

Models paraded vibrant, youthful ensembles fit for a warm-weather strut down the catwalk, including creative, colorful swimwear, laid-back tracksuits and billowing chiffon dresses in bold floral and patchwork prints. While the whole spectacle was nothing short of noteworthy, our favorite moment was the playful finale, when Gigi Hadid, Imaan Hammam and a troupe of brightly clad models splashed their way through the lagoon. (Photos via Neilson Barnard/Getty)

Our first reaction to this out-of-this-world show? WHOA. Wacky doesn’t quite cover it. Purple uplighting, skyward-reaching hair styles, kewpie lips and a wooden structure in the middle of the room: There was a lot going on, to say the least. Once we got over the initial shock of the visual chaos, it all started to come together. Japanese schoolgirls were the inspiration for the collection, translating into sharp tailoring, pleated skirts and Japonerie prints. While the collection had a uniform feel, varying silhouettes and fabrics in shades of cool pastels gave each look a sense of individuality. The accessories also fit the mold, with both structured and eccentric bags and menswear brogues completing the edgy schoolgirl looks. (Photo via Mireya Acietro/Getty)

To say Givenchy’s move to the Big Apple set the fashion world abuzz is a bit of an understatement. Designer Riccardo Tisci blew the show’s one thousand attendees out of the water with a totally unexpected mediation on the events of September 11. Tisci teamed up with artist Marina Abramovic to create a contemplative spectacle that paid tribute to the losses on 9/11 and served as a reminder to slow down, reflect and be present.

Perched high above makeshift structures of textured aluminum and wood, performance artists slowly acted out repetitive and symbolic ritual scenes, like a woman being doused with water and a couple embracing alongside a clearing of trees, while iconic music from global religions played solemnly in the background. The fashion was just as dramatic, with ready-to-wear appearing in a palette of black and white and incorporating both masculine and feminine aesthetics. Lace and silk translated into tailored suits, lace-trimmed camisoles and slip dresses, each element contributing to an overall sleek silhouette. (Photos via Frazer Harrison/Getty)

Designer Misha Nonoo brought her show to the masses — a truly rare event — by posting the entire show to Instagram. How cool is that? Now if only we could could get the rest of the fashion crew in on the idea. Check out the full collection at @Mishanonoo_show. (Photo via @Mishanonoo_show)

Dance numbers and a live performance with a start-studded cast? It’s safe to say that Opening Ceremony set the bar high for seasons to come.

What might have seemed like a series of "epic falls" on the runway just now was actually a dance orchestrated by world-renowned choreographer @Justin_Peck. Thank you so much to all of the talented @nycballet dancers who acted as models at our show #NYFW #InstaShootSS16

A number of performers joined the ranks of models as they made their way down the runway for the finale, surprising everyone with an unexpected dance, a graceful interpretation of the dreaded catwalk fall. (Photos via Arun Nevader/Getty, @openingceremony)

Coach hosted its first big runway show at New York Fashion Week on NYC’s iconic High Line. The unique aerial park proved to be the ultimate setting for the boho collection, with its abundant tall grasses and proximity to Coach headquarters.

Located at the end of the High Line at 30th Street, the makeshift venue was specially constructed for the event and featured tall glass walls and metal beams that created a unique contrast with the natural, prairie-like vibe of the plantings and the collection’s vibrant, Americana-inspired prints. (Photo via Randy Brooke/Getty, @coach)

Presentations can sometimes be a bit underwhelming, but the lack of spectacle lends itself to closer examination of the clothing. While we understand, sometimes the lack of creativity bums us out — presentation is everything, after all. Collina Strada totally gets it, which is why they punctuated Milk Studios with an enormous cotton-candy colored sculpture that infused the showroom with an other-worldly feel. (via @collinastrada)

For his debut at New York Fashion Week, a simple setup simply wouldn’t do for designer Han Chong. To make his contemporary, feminine designs seriously pop, he displayed them against a monochromatic pile of vintage furnishings, an unexpected and eclectic choice that certainly made a statement. (via @mrselfportrait)

We love a non-traditional setting, and apparently, so does Rosie Assoulin. The designer showcased her bright, modern collection in a very unexpected spot: a public pool in the West Village. The venue not only made the designs pop, but the graphic illustrations also played up line’s funky, modern feel. (via @@diandraleong)

To highlight the clash of street punk and romanticism, designer Nicola Formichetti set up shop in the late 19th-century Down Town Association in FiDi.

A Rodarte show is never without theatrics, and this year was no different. The spring collection’s fusion of disco-era glam, folksy femininity and rocker edge provided the inspiration for the show itself with bright, florescent lights draped in colorful, earthy moss and rugged netting. (via @officialrodarte)

ALLSAINTS challenged the traditional runway show by casting street-style kids as models, instead of going through a traditional agency. They gave their “models” full creative control over the looks, letting them style themselves in the casual-chic brand’s offerings for Spring 2016. To add to the ultra-cool DIY vibe, the models doubled as actors, starring in a short film that played on television screens strategically placed throughout ALLSAINT’s runway setting.

Who do you think deserves the title of most creative? Tell us in the comments!

Libby MacCarthy
Libby MacCarthy is an urban planner turned writer with a love (bordering on unhealthy obsession) of all things fashion and beauty related. She lives for perfectly brewed coffee, farmer's markets, dinner parties and perusing impeccably designed boutiques. When she's not on the hunt for the latest trends, you'll likely find her plotting her next adventure or nose deep in a book. Libby currently splits her time between the East Coast and her adopted home of France. Follow her daily adventures on Instagram.
Designers
Fashion
Designers Fashion Week New York Fashion Week
More From Fashion