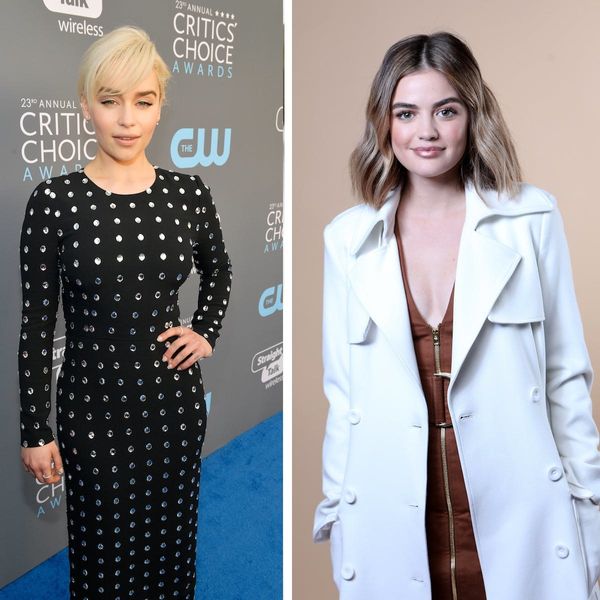 We've all been there. After a period of not visiting your stylist, you start itching to do something drastic — like bleaching your whole head blonde. Trust us when we say, you're not alone. Here are 14 naturally dark-haired celebs, including Emilia Clarke, Solange, and Selena Gomez, who have taken the plunge!
Emilia Clarke: The naturally brunette Emilia Clarke shot to fame on the small screen as Game of Thrones' white-blonde Mother of Dragons, Daenerys Targaryen — and for the duration of the show, Clarke donned Khaleesi's wigs. But ever since the beginning of 2018, as the final season was wrapping, the 31-year-old decided to finally head over to the lighter side. (Photo via Matt Winkelmeyer/Getty Images for The Critics' Choice Awards)
Lucy Liu: At the 63rd Annual Obie Awards in May 2018, Lucy Liu showed up with flaxen-colored locks that made us do a double take. It was by far the ordinarily black-haired actress' most dramatic hair change in her 27-year long career in Hollywood. (Photo via Jemal Countess/Getty Images for The American Theatre Wing)
Katharine McPhee: The Scorpion star recently stepped out to the Broadway.com Audience Choice Awards in May with a short new bob — and we couldn't help but notice that the brunette songbird seems to be inching her coif to a blonder hue. (Photo via Desiree Navarro/WireImage)
Solange: The A Seat at the Table singer has been rocking light locks since the second half of 2017, but she's always switching up the way she styles it. This platinum 'fro from February 2018 is white hot. (Photo by Kevin Mazur/Getty Images for Stuart Weitzman)
Lucy Hale: The Pretty Little Liars alum attended Beautycon Festival NYC in April sporting a honeyed 'do and her signature lob. She's definitely one to play with color, so who knows how long she'll have this hue! (Photo via Amy Sussman/Getty Images for Beautycon)
Leighton Meester: Back during her Gossip Girl days, Blake Lively was the one known for her golden strands, while Leighton Meester cemented her role as the dark-haired queen bee of Constance Billard School, Blair Waldorf. But no longer! Meester attended Freeform Upfront on May 15 with blonde bombshell waves. (Photo via Desiree Navarro/WireImage)
Marion Cotillard: Marion Cotillard lightened her color back in late 2017, and since then, she's proved just how statement-making going from brown-to-blonde can be. Here she is rocking a sunny lob at the 71st annual Cannes Film Festival in May 2018. (Photo by Pierre Suu/GC Images)
Ariana Grande: While her hairstyle (read: ponytail) doesn't change much, Ariana Grande certainly doesn't shy away from switching up hues. She's gone gray, pink, and lately, at the 2018 Billboard Music Awards, the "No Tears Left to Cry" chanteuse performed while sporting a champagne toned pony. (Photo via Ethan Miller/Getty Images)
Salma Hayek: Blink and you'd miss it, but Salma Hayek had a strawberry blonde coiffure back in February earlier this year. The Mexican actress is already back to her original color, though. Alas, it was fun while it lasted! (Photo via Jeff Spicer/Getty Images)
Selena Gomez: In December 2017, Selena Gomez was spotted with a bleached 'do. Though she too has gone back to black, we have to say, the 25-year-old can seriously rock ANY shade. (Photo via Jeff Spicer/Getty Images)
Daisy Ridley: Back in January of 2018, the actress debuted a dirty blonde look that was a major departure from her Star Wars character Rey. Daisy Ridley, who is a natural brunette, is already onto the next shade: a fiery red! (Photo by Eamonn M. McCormack/Getty Images)
Zendaya: While this one is almost certainly a wig, we think that it's a change that Zendaya should consider making permanent. The Greatest Showman actress attended the 2017 Fashion Awards in a velvet black getup and a gorgeous wheat-toned pixie. (Photo via Mike Marsland/BFC/Getty Images)
Kim Kardashian: Kim Kardashian West has had an on-and-off relationship with blonde hair for years now, and while she was photographed at the 2018 Met Gala with her usual ebony tresses, the reality star went back to blonde as an anniversary gift to hubby Kanye West. (Photo by Taylor Hill/Getty Images)
Kristen Stewart: Kristen Stewart is also a natural tawny-haired celeb who has been periodically blonde for some time, whether with frosted tips or with a bleached buzz cut, as seen here at the 2017 Cannes Film Festival. (Photo via Pierre Suu/GC Images)

Have you ever undergone a drastic color change? Tell us how it went @BritandCo!

Have you ever undergone a drastic color change? Tell us how it went @BritandCo!

Kimberly Wang
Kimberly Wang writes about all things pop culture, tech, style, and beauty. She's a Bay Area transplant and has an MFA in Creative Writing from Columbia University. On a sunny New York day, you can find her hanging out with her mini schnauzer Isabelle Jellybean on a blanket in Central Park.
Celebrity Hair
Hair
Celebrity Hair Colored hair Hair Color Hair Dye
More From Hair