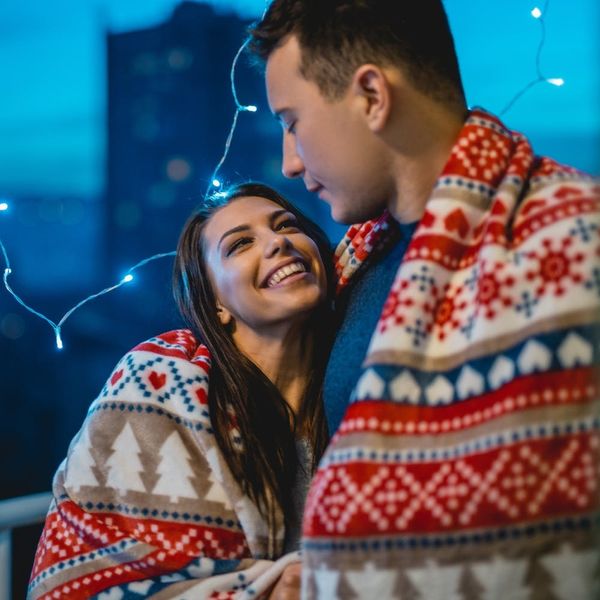 If you’re mentally preparing yourself for a holiday season of singledom, you may not want to talk about it. During a time of year that seems built for unrealistic romance (thanks a lot for that, Hallmark Christmas movies!), it’s easy for the unattached among us to anticipate a long, lonely few weeks punctuated with holiday parties that only serve to remind us of just how single we are. But before you decide to give up on dating altogether and resign yourself to hiding on your couch with a mug of spiked hot chocolate until mid-January, we have some food for thought for you.

Dating coach Diana Mandell thinks you should probably take her holiday season dating advice instead of, well, wallowing. And we agree. Her suggestions make the whole prospect of being single for the months of November and December seem suddenly less daunting. They might even be fun! And whether you choose to apply her advice to your search for love or simply to make you feel a little more confident as your sparkly single self, we have a feeling it’s going to ease your sad holiday vibes. Keep reading to learn more about the 10 dating mistakes Mandell says you should avoid during the holiday season for maximum cheer.

1. Lowering Your Standards: We know that the pressure to be in a relationship is higher than ever at this time of the year, but don’t let that be the reason you break your usual dating rules or consider seeing someone you wouldn’t otherwise. “Believing that dating someone is better than dating no one is dangerous and completely untrue,” Mandell says. “Don’t lower your standards because you’re feeling lonely.”

2. Comparing Yourself to Others: Holiday parties and family events are a great opportunity to reconnect with the people you care about — but the flip side is that they also create more opportunities for you to measure yourself against what those people are doing in their own love lives. Remember that everyone is putting their best foot forward with their dates at these events. The picture may not be as rosy as it appears!

3. Beating Yourself Up for Being Single: “Beating yourself up and feeling badly about being single doesn’t get you dating someone any faster,” Mandell says. “Accept where you are right now and have faith that when a great person comes your way, you will take advantage of it. It’s okay to be single closing out the year.”

4. Repeating Old Patterns: The year is winding down, which means you should be reflecting on the not-so-healthy dating habits you’ve developed instead of engaging in them. Now more than ever, see if you can pay a little bit more attention to the patterns that have done you a disservice in the past. Did you spend the year pursuing partners that weren’t right for you? Did you overlook certain red flags time and again? Don’t waste your time doing those things all over again this holiday season.

5. Staying Home from Holiday Events and Parties: When you don’t have a plus-one, the temptation to sit out the holiday social circuit is oh so real, but we urge you to reconsider. Staying home will only make you feel more lonely, and going out to a party gives you the chance to get dressed up, visit with friends, and maybe even meet a new love interest. You never know! Take off those PJ pants, throw on some lipstick, and get out there. Who needs a date?

6. Not Putting Yourself Out There: With colder weather moving in, we tend to go into hibernation mode for the holidays and the long winter ahead. This may sound super cozy, but it’s not the strongest move for your love life. “Your dream partner isn’t going to magically appear and knock on your door,” Mandell says. “It can feel uncomfortable, but always take advantage of your surroundings and meet as many people as possible both for the practice of putting yourself out there and for potentially meeting someone.”

7. Reaching Out to an Ex: Don’t let the warm and fuzzy feelings that the holidays bring extend where they don’t belong. That’s right — we’re talking about your ex. It’s tempting to invite a previous flame out for a drink during this season in the name of togetherness, but you will almost certainly regret it. Leave the past in the past.

8. Ignoring Red Flags: The holiday season is no excuse to give a potential S.O. a free pass on bad behavior. If you have an icky feeling in your gut about someone you’ve met online or you’re generally unimpressed by your date’s nasty attitude, it’s time to move on. You don’t need a New Year’s Eve kiss that badly.

9. Not Holding Yourself Accountable: “Yes, you should always leave a bit of room for flexibility, but you do want to make sure that you are spending time with people who are giving you what you say is most important to you,” Mandell says. “Always hold yourself accountable to what you say you want.” Trust your instincts, no matter how romantic things look under the twinkly lights.

10. Not Setting New Year’s Goals: If you can’t help but feel down in the dumps about your single status for the holiday season, you might want to consider channeling those feelings into some romantic resolutions for the new year. Spend some time really thinking about what you’re looking for in the months ahead, and see how much you can set yourself up for success to get there.

Have you made any of these mistakes trying to date during the holiday season? Tweet us @BritandCo!

Alli Hoff Kosik
Alli Hoff Kosik is a freelance writer who is passionate about reading, running, rainbow sprinkles, her lipstick collection, watching embarrassing reality TV, and drinking pink wine. She lives in Brooklyn with her husband and (in her dreams, at least) three golden retriever puppies. Listen to her talk books on The SSR Podcast.
Dating
Relationships
Dating Relationship Advice