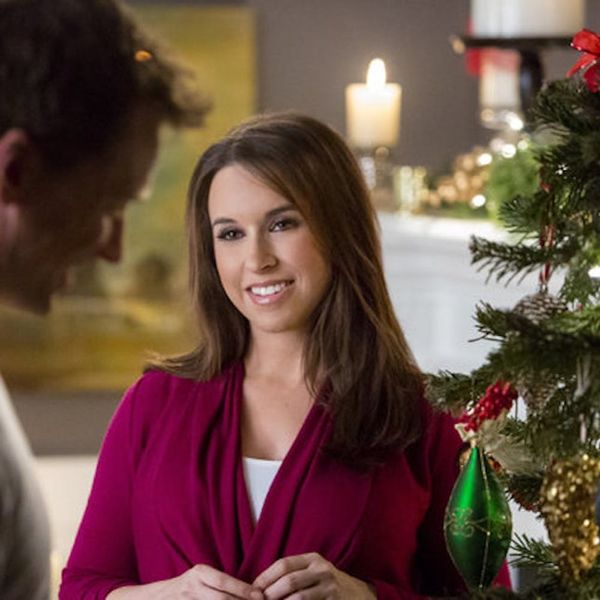 Look, we know it’s still fall. We’re still working on our Halloween costumes and milking every last bit of pumpkin spice errthing (well, mostly errthing) out of these comfortably cool months. But before you know it, it’ll be Gilmore Girls premiere weekend, aka Thanksgiving, and after that, of course, comes the most wonderful time of the year: Christmas.

Starting this Saturday, October 29 (yep, before Halloween!), with the premiere of A Wish for Christmas, the Hallmark Channel turns into a full-fledged all-day, all-night Christmas movie channel, so if you’re someone who’s not fond of seasons being celebrated earlier than they maybe should, this is not for you. But if you’re like us and can’t wait to embrace all things Christmas, read on for highlights from the massive movie lineup, and have your calendar ready for some serious couch-time scheduling!

1. October 29 — A Wish for Christmas: Lacey Chabert plays Sara Shaw, a woman who needs some help from Santa to have more bravery and speak her mind at work — but the wish only lasts for 48 hours. Will Sara learn to stand up for herself even without the help of magic? We have a feeling that might be a “yes.”

2. November 5 — The Mistletoe Promise: Jaime King and Luke Macfarlane play strangers who meet serendipitously and who have one thing in common: They’re both Scrooges about Christmas. As they enter a pact to help each other through the season, their fake coupledom might end up being more than business.

3. November 12 — Every Christmas Has a Story: Lori Loughlin ALSO plays a Christmas cynic who, while on air as a broadcaster, slips up and shares her feelings with viewers. As she gets forced on assignment to try to rebuild her image, she might just end up loving the season after all.

4. November 13 — Christmas Cookies: This one centers on the classic story line of a giant corporate company trying to shut down a mom-and-pop shop (in this case a cookie company), and all the changes of heart that happen within.

5. November 19 — My Christmas Dream: Danica McKellar plays a retail manager with dreams to be promoted to the Paris store. She has to impress her boss with a store display first, and ends up falling for her old co-worker who she enlists to help. Will she stay or will she go?!

6. November 20 — A December Bride: Jessica Lowndes plays aspiring interior designer Layla who is dreading her cousin’s upcoming wedding to her own ex-fiancé. When she ends up begrudgingly going to the wedding with the guy who introduced the bride and groom, sparks fly.

7. November 23 — Christmas in Homestead: Taylor Cole plays a famous actress who, while on location in the Christmas-obsessed town of Homestead, Iowa, finds an unlikely romance with the local inn keeper and single dad, Matt. The small-town life might end up being more fulfilling than she thought.

8. November 24 — Christmas List: Alicia Witt plays Isobel, a woman obsessed with creating the picture-perfect Christmas. But when her boyfriend bails and she’s tempted by a new romance, she learns to embrace the unexpected.

9. November 25 — Journey Back to Christmas: Candace Cameron Bure plays Hannah, a WWII-era nurse who finds herself transported to the year 2016. In her journeys she learns that the true meaning of Christmas is timeless.

10. November 26 — A Heavenly Christmas: Kristen Davis plays a workaholic who meets an untimely end and finds herself learning to become a Christmas angel in Heaven. She’s not great at it off the bat, but over time, she learns she’s actually pretty good at helping other people.

11. November 27 — Broadcasting Christmas: As two reporters (Melissa Joan Hart and Dean Cain!) duke it out for a coveted hosting job, they must spend the two weeks leading up to Christmas outdoing each other by finding the best Christmas stories to report on. But in so doing, the people they meet and the stories they hear give them some perspective on what’s really important — and it isn’t just a job.

12. December 3 — A Dream of Christmas: Nikki DeLoach plays Penny, a woman who isn’t content with her life. When she wakes up one morning in an alternate reality and with everything she THOUGHT she wanted, she quickly learns to appreciate what she had — and now she’s got to get it back.

13. December 4 — Looks Like Christmas: Two single parents duke it out over who will run their children’s school’s Christmas play, only to have to learn to work together and maybe — JUST MAYBE — fall in love. We know you didn’t see that one coming.

14. December 10 — A Nutcracker Christmas: Lilly’s biggest dream comes true when she lands the lead in The Nutcracker. But when she receives the tragic news that her sister has died, her world falls apart.

15. December 11 — Meant to Be: Maddie is an all-business marketing exec whose car troubles lead her to the holiday-obsessed town of Christmas Valley. While there she meets strangers who feel like family and starts questioning what it really is she wants from life.

16. December 17 — My Christmas Love: Okay, this one sounds super fun. When a hopeless romantic starts anonymously receiving the gifts from 12 Days of Christmas at her door, she and her squad set out to find the mystery suitor and see if it’s too good to be true.

17. December 18 — Sleigh Bells Ring: The woman in charge of her town’s Christmas parade gets a chance to use Santa’s REAL LIFE SLEIGH in the parade. Obviously, this sleigh has special powers and it leads her to all sorts of magic, like the Christmas spirit and also a handsome man.

18. December 25 — When the Heart Calls Christmas: This Christmas-day flick tells the heartwarming story of a town coming together to give those less fortunate a happy holiday.

19. January 1 — A Rose for Christmas: Rachel Boston plays Andy, who needs to take the reigns from her sick dad and finish his client’s float for the Rose Parade. She’s stuck working with a stodgy businessman, but, spoiler alert: Maybe they’re more compatible than it seems.

Which Christmas movie are you most excited about? Let us know over @BritandCo!