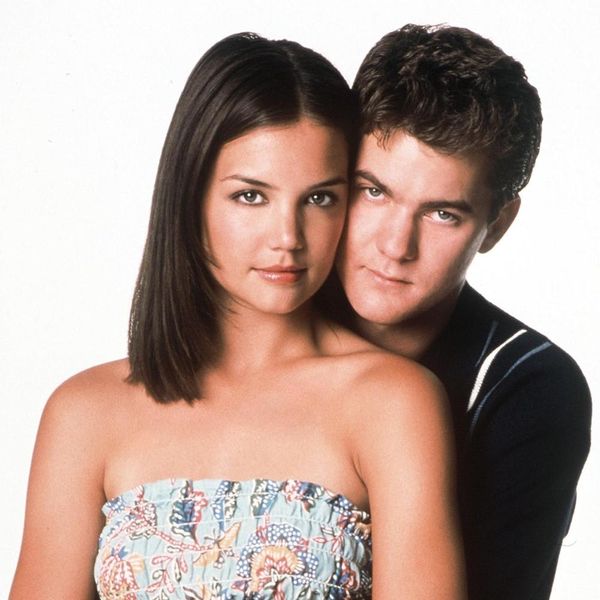 Entertainment Weekly‘s Dawson’s Creek cast reunion has brought up all sorts of memories and feelings, for both the cast and the fans. One still-very-hot topic of debate, of course, is the love triangle involving Joey Potter (Katie Holmes), Pacey Witter (Joshua Jackson), and Dawson Leery (James Van Der Beek).

According to the show’s creator, Kevin Williamson, the original plan was for Joey to end up with her “soul mate,” Dawson. But that changed once Williamson notced the spark between Joey and Pacey — or, rather, the actors who played them. “When we saw the chemistry [between Holmes and Jackson], it was more surprising,” he told Entertainment Weekly. Looking back on the decision to change the direction of Joey’s love life, he added, “I’m so happy we did it.”

Holmes is happy too — mostly because she (unlike Joey) didn’t have to actually choose. “I’m glad that Kevin had to make the decision and we didn’t,” she admitted.

Even Van Der Beek gives the outcome a thumbs up, despite the fact that his character ended up as the odd man out. “It felt right to me,” he confessed. “It seemed like it made more sense.”

Unfortunately for him and the rest of #TeamPacey, it looks like Pacey and Joey’s happily-ever-after might not have been so happy. Asked where he thought his characters would be today, Williamson had some less-than-rosy predictions.

“I think Pacey and Joey got married. I think they had a family; I think there were troubles. I think they got a divorce,” he told Entertainment Weekly. “I think that when we meet them they’re in a very dark place. But there’s still something between them that forces them to come together and raise their children. As they seek out happiness with others, they just keep coming back to each other.”

For more from the Dawson’s Creek cast, head over to EW, and grab your hard copies on newsstands on Friday, March 30.

Are you Team Dawson or Team Pacey? Let us know @BritandCo!

Desiree O
Desirée O is a ‘Professional Bohemian’ who loves anything and everything related to the arts, entertainment, and pop culture. She ADORES being a ‘Newsy’ for Brit + Co, covering all of the latest tidbits of awesomeness that you want to read about. When she’s not writing, she’s either making messy art, going on long adventurous walks with her camera, or poking around over at bohemianizm (http://www.bohemianizm.com/). You can find out about Desirée O and her work at http://DesireeO.com/ or follow her on Twitter @DesireeO.
Nostalgia
Pop Culture
Nostalgia TV