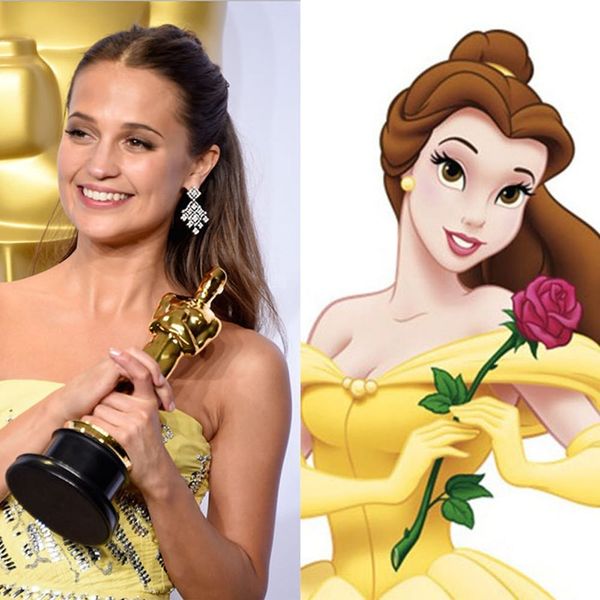 When it comes to prom, who doesn’t want their night to play out like a fairytale? Or at least a scene from She’s All That? And while we’re old enough to get the distinction between real life and fantasy, we think your night should have a touch (or two) of fairytale magic. Once you’ve found the prom dress of your dreams, look to the OG divas of hairstyle inspo: our fave Disney princesses. Whether you’re going for a modern-day Snow White look or you’re more focused on shaking it on the dance floor a la Sleeping Beauty (after she woke up, of course), scroll through these 11 Disney hairstyles to find the perfect storybook look for your epic prom night.

1. Elsa’s Messy Braid: Put a sweet spin on Elsa’s flawless ‘do fit for an ice queen. Translate her bejeweled messy braid into a more elevated style, like style icon Blake Lively in this relaxed braided bun. (Photo via Kevork Djansezian/Getty; Image via Disney)

2. Snow White’s Face-Framing Curls: While we love this classic look, skip the bow and opt for something on the modern side with a simple updo. Kendall perfectly captures the essence of Snow White (down to the red lipstick) without going overboard. Don’t skip the loosely curled, face-framing pieces to keep that fairest-of-them-all look on point. (Photo via Alberto E. Rodriguez/Getty; Image via Disney)

3. Tiana’s High Bun: As we’re well aware, when it comes to next-level hair, Zendaya reigns supreme. Check out how she recreates that Southern-royalty appeal with a super sleek high bun. (Photo via Frazer Harrison/Getty; Image via Disney)

4. Aurora’s Soft Curls: A big life lesson we can take from Disney movies is that, whether you’re frolicking in the forest or battling it out with a beast, it’s always important to have your hair on fleek (and prom is no exception). Steal Aurora’s super bouncy curls, like Dianna Agron, by pinning back the front sections of your hair and playing up the volume for that princess-worthy mane. (Photo via Frazer Harrison/Getty; Image via Disney)

5. Jasmine’s Bubble Braid: Keep your prom look super polished with a pretty bubble braid. Use small elastics to section off your low ponytail and get ready for a magic carpet ride… or, you know, prom photos and stuff. (Photo via Valerie Macon/Getty; Image via Disney)

7. Pocahontas’s Deep Part: Strut into prom like the gorgeous lazy girl you are with this simple, straight ‘do and deep side-part combo. Shay Mitchell flawlessly reimagines the look paired with a blowout, since unlike Pocahontas, we’re pretty sure the wind doesn’t just style her hair for her. (Photo via Michael Loccisano/Getty; Image via Disney)

8. Anna’s Milkmaid Braid: What’s a princess look without some #flawless braids? Anna only has this sna-azy updo for like 10 minutes in Frozen, but we can’t deny that this was her best look. Glide into prom like a boss with Anna’s romantic milkmaid crown. (Photo via Jason Merritt/Getty; Image via Disney)

9. Cinderella’s Beehive Bun: As if T-Swift couldn’t get any more perfect, we just realized she’s a dead ringer for Cinderella. Get an extra hit of height by recreating this retro style paired with a classy French twist. (Photo via Jason Merritt/Getty; Image via Disney)

10. Belle’s Topknot: In case you haven’t noticed, Beauty and the Beast’s leading lady has been rocking the half knot since before it was cool. Copy Belle’s look to a T, like Oscar winner Alicia Vikander, with a center-parted half-up knot, complete with curls. (Photo via Ethan Miller/Getty; Image via Disney)

11. Mulan’s Floral Comb: Give your warrior princess style some extra oomph with some bombshell curls. Accent with a pretty floral comb to tie the look together. (Photo via Larry Busacca/Getty; Image via Disney)

What princess hair will you be rocking for prom? Follow us on Pinterest for more genius hair hacks and inspo.

Wendelle Co
Wendelle is a Brit + Co contributor and a notorious pop culture and film junkie (with a passion for everything '90s). When she’s not writing, you can find this San Francisco native brunching with her bestie or working at a wedding or two. You can follow her latest escapades on her Instagram @WheresWendelle
Hairstyles
Hair
Hairstyles Prom