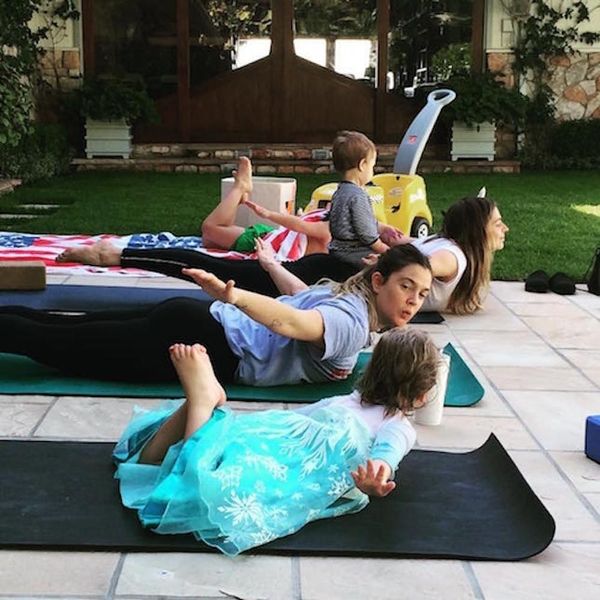 1. The Frozen dress! Gah! Drew Barrymore Instagrammed the most adorable photo of herself and daughter Olive mid-yoga pose, captioning it “Princess Elsa came to our mother daughter yoga class. #magicdays #iloveolive.” If you’ve spent any time with a young kid or, I dunno, been alive in the world, over the past few years, you’ll know that the Elsa dress is a staple, so we’re not surprised to see little Olive rocking it, even to mommy daughter yoga. More than the adorable outfit, it’s nice to see Drew looking peaceful and healthy after her difficult announcement that her and husband Will Kopelman were divorcing just days ago. (via @drewbarrymore)

2. Lena Dunham tells Seth Myers that the Kardashians are amazing role models. During an appearance on Late Night with Seth Myers alongside Girls and Lenny Letter co-creator Jenni Konner, Lena said that when she Instagrams anything that has to do with Khloe Kardashian, the comments turn against her, and she’d like to put an end to it. “People will be like, ‘Those Kardashians aren’t what you represent!'” Lena says, adding that “they’re awesome entrepreneurs who are all about sisterhood and connection, so yeah, they are.” PREACH.

3. Jenna Dewan Tatum had the PERFECT response to Drake’s “Chaining Tatum” lyric. In Drake’s new song “Pop Style,” Drake raps “got so many chains they call me Chaining Tatum,” which is 1.) amazingly perfectly corny, 2.) SO Drake and 3.) the perfect Tatum bait. Channing’s wife posted a throwback photo of her husband, bare chested, wearing a big ol’ gold chain, with simply a winking-face emoji as the caption. Nailed it! (via @jennaldewan)

4. Donald Trump in Mean Girls is too perfect and now we want a remake. Imagine Cady Heron screaming at The Plastics about ISIS? Well, here you go! (h/t Cosmo)

5. This third grader broke the news of a local homicide and is a journalistic inspiration. Nine-year-old Hilde Kate Lysiak has been taking the internet by storm, running her own news blog and even being the first reporter on the beat of a homicide in her town of Selinsgrove, Pennsylvania.”I just like letting people know all the information, It’s just what I really want to do. And crime [news] is definitely my favorite,” she told the Washington Post. When she did break the story, locals were not too kind to her about it, commenting that she should get her facts straight before reporting. “If you want me to stop covering news, then you get off your computers and do something about the news,” she fired back, and we stood and clapped. (via The Washington Post)

6. Quote of the day: “I think we need to remember that we are more similar than we are different. We all want the same things: love, acceptance, kindness, and I want one of those new Teslas.” – Ellen DeGeneres speaks out on her show against Mississippi’s anti-LGBT Religious Freedom Bill.