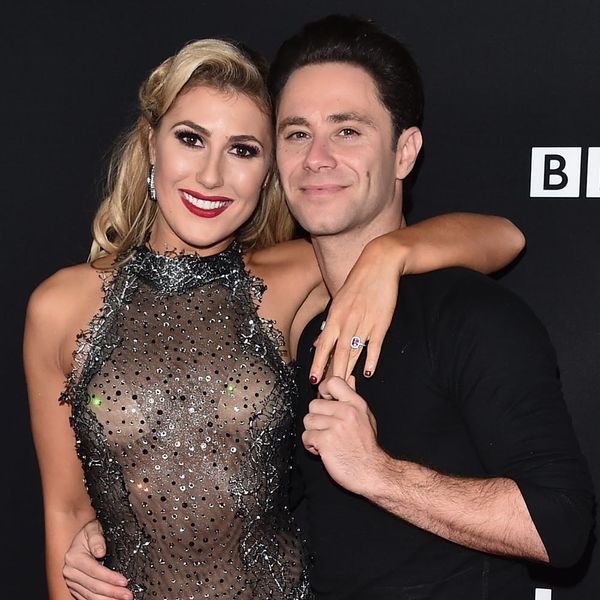 It’s another Dancing With the Stars wedding! After a love story spanning several years and seasons of the show — complete with a live on-air proposal — pro dancers Emma Slater and Sasha Farber have officially tied the knot.

Slater and Farber’s nuptials took place at Bella Blanca Event Center in Los Angeles on Sunday, according to Us Weekly. The guest list included many of the pair’s DWTS costars: Julianne Hough (along with husband Brooks Laich), Nick and Vanessa Lachey, Keo Motsepe, Sharna Burgess, Drew Scott, and Cheryl Burke were all in attendance, and reportedly enjoyed scented candles and tequila as their guest favors.

Slater wore two stunning Rivini gowns, changing out of her fitted, lace-appliquéd number for a more flowing and dance-appropriate dress for the reception, while Farber wore a tux handmade by Onik Design. Naturally, the pair hit the dance floor for their big day, sharing their first dance as husband and wife to Ed Sheeran’s romantic hit ballad “Perfect.”

It’s been a busy couple of years for weddings for the ABC show family: In August 2016, former dance partners Robert Herjavec and Kym Johnson tied the knot, and in July 2017, both Julianne Hough and Brooks Laich and Maksim Chmerkovskiy and Peta Murgatroyd got married.

The latest DWTS newlyweds first started dating back in 2011. In October 2016, Farber proposed to Slater in front of a live studio audience on an episode of DWTS. Congrats to the happy couple!

Do you think there will be even more DWTS love connections? Let us know @BritandCo!