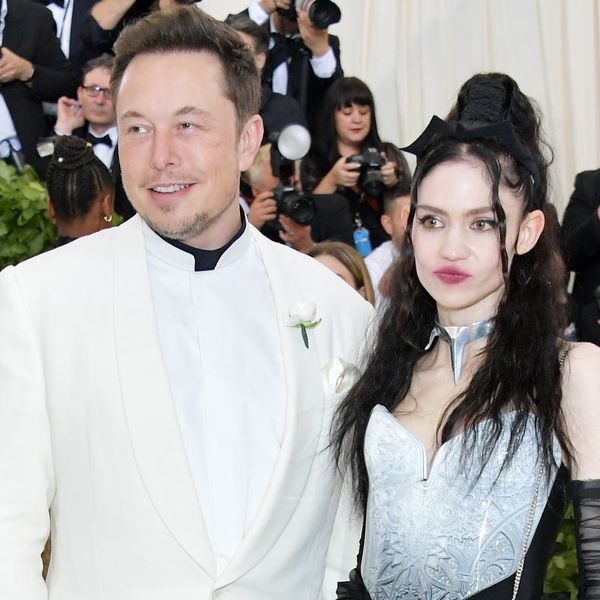 The 2018 Met Gala red carpet featured a number of memorable moments, including a potential proposal and the debut of long-rumored couple Lili Reinhart and Cole Sprouse. But the night’s true show-stealing moment was when tech billionaire Elon Musk and musician Grimes arrived together, fueling dating rumors and sending the internet into a frenzy.

A few hours before the event began, Page Six reported that the pair had been “quietly dating” since meeting online about a month ago. Musk had reportedly planned to tweet a joke that mashed up the concept of Roko’s Basilisk, a thought experiment about AI rulers taking over the world, with Rococo, an 18th century decor style, but he learned that Grimes — AKA Claire Boucher — had already made the same nerdy “Rococo Basilisk” pun in her 2015 video for “Flesh Without Blood.”

The Tesla co-founder hinted at the news himself earlier in the day, tweeting the pair’s supposed meet-cute pun. Hours later, the pair walked the Met red carpet, with Musk in a white jacket and priest-like collar, and Grimes in a villainous black-and-white getup — complete with a Tesla choker.

Naturally, the internet had jokes about the unlikely pairing.

where were you when you learned about elon musk and grimes

unfortunate that the first person i'm seeing irl after finding out about grimes and elon musk dating is my therapist, who doesn't know who either of these people are but is about to get an earful

2-3 years ago, I made a Twitter wish for more extreme and unlikely celebrity couples. At this juncture, I would like to make a public apology for my damaging act of sorcery. https://t.co/GOLyTbI28s

Neither the 46-year-old SpaceX boss, who ended a year-long relationship with Amber Heard in August, nor the 30-year-old musician has officially commented on the dating rumors, but a quick look back through each of their Twitter feeds shows they’ve been chatting for weeks. One user even joked to Musk on April 27 that he should “just ask [Grimes] out already,” to which Musk responded with a simple winking emoji.

What do you think of Elon Musk and Grimes as a potential couple? Let us know @BritandCo!