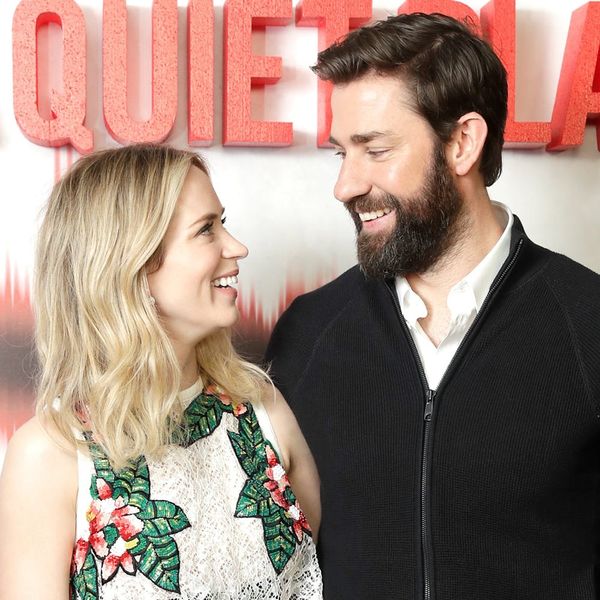 Emily Blunt and John Krasinski have made some pretty swoon-worthy public declarations of love in their nearly decade-long romance. And with the couple sharing the big screen together for the first time in their new thriller (hitting theaters this month), we’re learning even more about their relationship. For example, Blunt recently admitted that it was basically love at first sight when she met her now-husband.

During an interview with People‘s Jess Cagle, 35-year-old Blunt said that she was very happily single until she laid eyes on Krasinski. “We were discussing how much I was enjoying being single,” the Devil Wears Prada actress recalled of a dinner date with a friend nine years ago. “And then [my friend] goes, ‘Oh, my God, there’s my friend John.’ And that was it.” After that moment, the couple were inseparable.

“We were engaged within 10 months, but I think we probably knew before that,” she told Cagle.

In their upcoming thriller The Quiet Place, the couple play parents trying to protect their children from zombie-like monsters who attack when they hear noise. The movie was directed by Krasinksi and is one that Blunt says hit close to home for her as a mom to 4-year-old Hazel and 21-month-old Violet.

“The family suffer a loss in the beginning of the film,” Blunt explained. “And so, there were scenes that I found personally more traumatic because it’s just so close to home for me. Normally, there’s a really clear divide for me between the role and between myself. And I like playing people who are very dissimilar to myself, but this was close to home.”

Have you ever experienced love at first sight? Let us know @BritandCo!