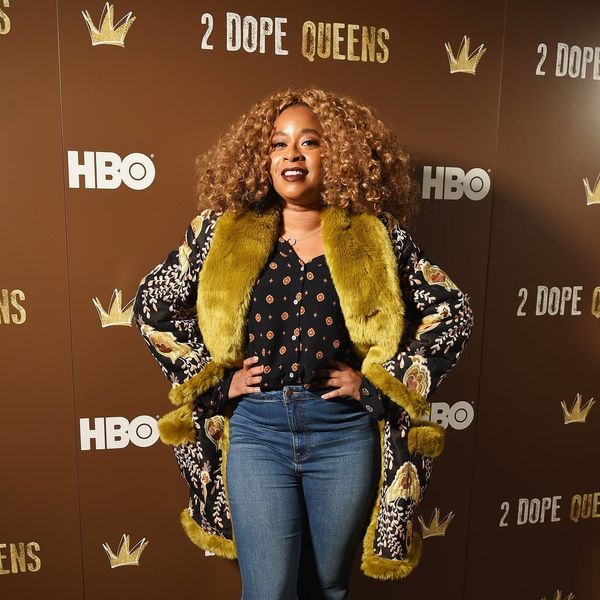 Phoebe Robinson thinks the world is currently a giant dumpster fire. She’s not entirely wrong, but the actress/comedian/author/podcast host/Dope Queen also says that not all is lost. Somehow, in between hosting two podcasts (2 Dope Queens and Sooo Many White Guys), filming both an HBO special and a Netflix movie, and participating in numerous other engagements (including speaking at our very own CreateGood Hustle night), she also managed to write a second book that provides the humor and hope we all need right now.

In Everything’s Trash, But It’s Okay, Robinson dives into various topics, including body positivity and the reality of Spanx; the time she drove an ATV and didn’t die, meeting Oprah once and U2’s Bono twice, interracial relationships (see: #BritishBaekOff), and why feminism is like the America’s Next Top Model contestant who triggered Tyra’s iconic “We were all rooting for you” rant. Read on to see what advice Robinson has for dealing with all sorts of trash.

Brit + Co: Since you’ve written this book, it seems like everything is even more trash and we’ve all set up permanent residence in the 17th circle of hell, or as what you eloquently refer to as “Shaquille O’Neal’s bare feet.” Is it (are we collectively) still okay?

Phoebe Robinson: Ya know, with the way things are going, the “okay” seems touch and go. Haha, but also not haha. But I will say this. I still believe that people are truly getting emboldened and involved in a way that I haven’t seen in quite a while, so I’m hopeful that people, including myself, will follow through on the energy and realize we can’t be asleep at the wheel or taken certain things for granted anymore. We just have to participate if we’re going to change things for the better. So, I think I’m hopeful that it will be okay.

B+C: Speaking of trash, we all have a little bit inside us and have to deal with a lot of it outside of us. What’s the key to recognizing and side-stepping/overcoming all the dumpster fires out there?

PR: I think accountability is huge. Once you know and own your flaws or your negative tendencies, it’s kind of more difficult to ignore them or not do anything about it. Once you know better, you hopefully do better. And also, just sort of giving yourself the room to make mistakes and know that it’s not going to be a quick fix. But [it’s] an ongoing process to get yourself to where you want to be. As for external dumpster fires, I think it’s just a matter of trusting your gut and allowing positive forces to be your North Star. Like mine are my parents, Oprah, and Bono. Haha. I sort of just imagine what they would do in certain situations and then also use my instincts and go from there.

B+C: Re: body positivity, if you could tell young women how to be defiant in our sizeist society, what would you say?

PR: I would say that it will obviously be difficult to shout [over] the din of hate and awfulness, but I think seek out images of people who look like you. Just having that mirror sometimes helps majorly with feeling less alone. And then, I think there are just practical things you can do like not apologizing for what your body looks like. It’s a small thing, but not uttering, “I’m sorry” when something doesn’t fit goes a long way. No need to accept responsibility.

B+C: You mention feminism has always been in some state of emergency. How can the average person help bring it back from life support?

PR: I think just actively trying to understand the perspectives of all women regardless of class, race, sexual orientation, etc. The knee-jerk reaction to silence people within feminism because their lives aren’t like yours needs to cease. As it’s sung in Hamilton: “Talk less.” Talk less and learn more.

B+C: You share how you pulled yourself out of financial debt after many years of struggling. What’s your best advice for someone who is trying to move from True Broke Person to Pretend Broke Person status?

PR: Budget, budget, budget. Live within your means. Example: If you’re on vacay and can afford a 400 dollar a night [hotel], doesn’t mean you have to spend that. You can get one for 300 a night and still have a good time.

B+C: Okay, let’s have some fun. Let’s do a lightning round of what’s trash and not trash.

The Bachelor: IGNORANT AND FUNNY TRASH

B+C: What’s next for you? A book with #BritishBaekOff? Another U2 concert?

Everything’s Trash, But It’s Okay is now available. Share your best tips for staying positive even when things seem like trash with us @BritandCo.