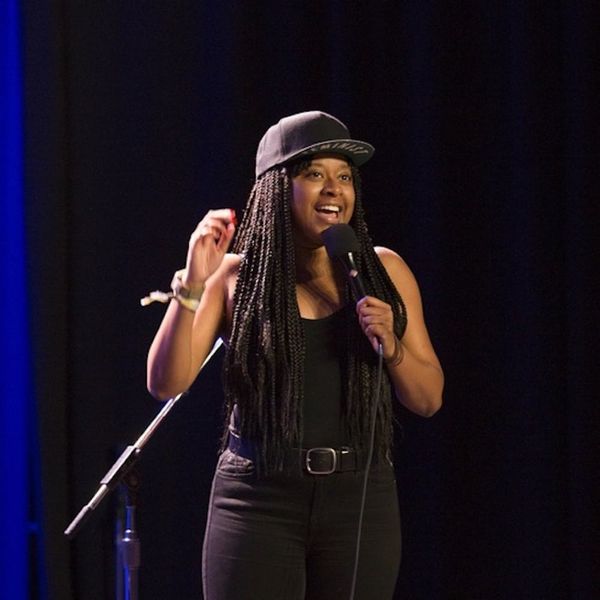 Phoebe Robinson is very funny, very talented, and very busy. The actress/writer/comic has two podcasts (2 Dope Queens with co-host Jessica Williams and Sooo Many White Guys), a book under her belt (the very hilarious You Can’t Touch My Hair: And Other Things I Still Have to Explain), an upcoming Twitter and TV show, plus (what we imagine to be) a time-consuming one-sided love affair with Jon Hamm. We caught up with Robinson at Colossal Clusterfest to chat about her hidden talents, upcoming projects, and her simple trick for dealing with online trolls. Check out all the dopeness that followed.

Brit + Co: What inspires you/where do you get your creative inspiration?

Phoebe Robinson: So many things inspire me. Comedy. I also watch a lot of drama that inspires me. I really just kind of look at the world and see, “Oh, that’s a weird thing, maybe I’ll talk about that.” I feel like when I was growing up, there were tons of shows like Moesha and Living Single about black culture, and I kind of miss that. So with my comedy and the work that I do, I just wanted to recreate that and show this slice of life that’s not everywhere. Now with Atlanta and Insecure, it really feels like we’re in another wave of showing different stories than what we’ve seen in the past decade.

Then there are people like… I was always a huge fan of Patrice O’Neal — he’s one of my favorite stand-ups of all time. Wanda Sykes. I’m also inspired by my friends. I love Broad City. I went to the screening last night, and the new episode for this season was so great. I get really inspired by my girlfriends and what they do, and it helps me push forward and do my own stuff.

B+C: You’ve got your book, your podcasts, and now an upcoming Twitter live show. Can you talk a little about that?

PR: It’s called #WhatsHappening. It’s gonna be a live show, 30 minutes, Monday through Friday. It’s just going to be me walking everyone through what happened on Twitter [that day] in entertainment, sports, politics, fashion. I’m really excited. It’s kind of weird to do a live show on Twitter because it’s literally broadcast to the world. But I think it’s going to be a really cool way to have that access with the audience and also talk about things, because we are on such a 24-hour news cycle. I think a live show on Twitter recapping everything — since so much happens on Twitter to begin with — makes so much sense. We’ll just cobble everything together from Twitter, and here you go, and now you can go off to bed or whatever.

B+C: How are you going to choose what topics to cover?

PR: It’s gonna be what’s trending. We’re also going to have a crack writers team and research staff that’s going to help compile stuff throughout the day. So it’s just going to be a lot of me on my phone looking at stuff and being like, what tickles my fancy? It’s going to be a mix of what I like and what’s happening. Like Donald Trump tweeting that non-word… that’s definitely something we’d talk about.

B+C: How do you deal with trolls?

PR: I block. Because I don’t want to write back and then that person screenshots it, and it becomes a thing. So I just block immediately.

I know that Jess [Williams] and I get trolls, and it’s literally just because they’re mad that two black girls have a podcast. You get a lot of angry dudes. I’m just like, I’m not even gonna waste my time; you’re just mad at the world. So I do a lot of blocking. I’ll screenshot what the person said, and I’ll send it to Jess, and we’ll make fun of the person amongst ourselves. And then I just block.

What would you tell your 18-year-old self?

PR: I was such a loser. I would be like, “Hey, don’t freak out. You’re gonna lose your virginity… in six years! It’s a really long time, but it’s coming.” I would also say, “Everything is going to be okay.” I’ve been doing comedy almost 10 years, and it took a really long time to get to this point where I’m actually making a living doing it. So I’d be like, don’t worry as much about being horribly, horribly broke and doing shows for five people — that will not be your forever situation. I think I would also say, “Be less hard on yourself,” because I’m really hard on myself. And I’m a workaholic. So I’d be like, “It’s okay to enjoy things and relax a little bit.”

And also, “You’re going to watch a show called Mad Men, starring Jon Hamm. And you will then fall in love with him when you meet him in 2016. And it’s going to be one-sided, and that’s gonna to be okay. [laughs] Just accept it. He’s not going to be in love with you, and that’s okay.”

B+C: Do you have any hidden talents?

PR: No. [laughs] Everyone who does comedy, this is our first and only resort. There’s never a comedian who is also a opera singer. All we have is personality. But I wish. I wish I had a hidden talent, like I could speak a different language. I can’t even cook that well.

I used to play the triangle. No offense to any professional triangle players, but anyone can be good at that instrument. It’s kind of fail-proof.

B+C: What else are you working on? Are there any upcoming projects you’re really excited about?

PR: I’m working on a second book because I’m crazy. So I’m really excited about that. It’s gonna be another essay collection. I’m going to start writing that this month.

I’m developing a show with Amazon, a half-hour comedy for me to star in with my good friend Amy Aniobi, who is a writer and producer on Insecure, and the show will be co-EPed by Ilana Glazer and Jill Soloway. So it’s a really kind of powerhouse union of ladies.

Season four of 2 Dope Queens, we’re gonna start back taping at Bonnaroo. And then Sooo Many White Guys — I want that to come back soon, but I don’t know when I’m going to be around to do it.

B+C: You also covered the Oscars Vanity Fair Party this year. How was that?

PR: I did the after Oscars live stream, which was fun. It actually wasn’t that crazy. It was a lot of underweight actresses being like, “I’m hungry!” I’m like, “Dude, just be a size 10 like me.” It is fine. I have rolls. Who cares.

It was super cool. I saw Ricky Martin, and we made eye contact. He was my childhood crush. I saw Halle Berry, and she’s prettier in person than even on TV, so you’re like, that’s cool, thanks for that. Andrew Garfield was really cute. I talked to Lin-Manuel Miranda for three seconds; he was delightful. I met Trevante from Moonlight, and I was like, you’re so beautiful. His teeth are so white that I’m like, is this for real. It was pretty chill. Everyone was really nice.

Are you a fan of 2 Dope Queens? Let us know your fave podcasts @BritandCo!