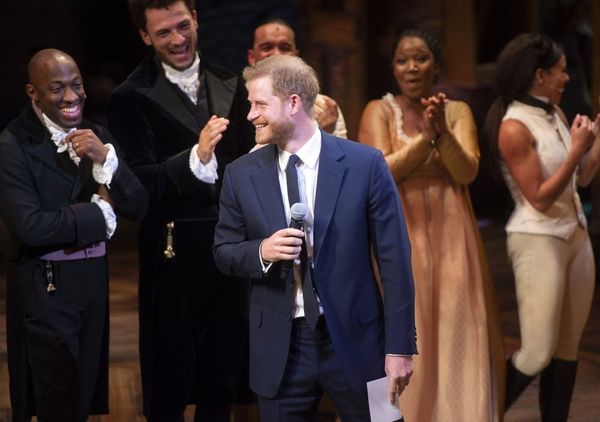 Noted Hamilton fans Prince Harry and Meghan Markle attended a charity gala performance of the musical at the Victoria Palace Theatre on Wednesday night, and Harry managed to steal the show when he sang a couple of words from one of the beloved stage show’s most popular songs.

Thank you to the cast and crew of @HamiltonWestEnd for a fantastic performance, raising awareness and funds for @Sentebale's work with children and young people affected by HIV #HamiltonLDN pic.twitter.com/M5hmjTfhEz

After watching the performance, Harry took to the stage and belted out the opening line from “You’ll Be Back” — which happens to be sung by the character King George III, his ancestor, in the play.

He only sang the first two words, “You say,” but that was all it took to send the audience into raucous laughter and applause. The show’s creator, Lin-Manuel Miranda, was also onstage with the cast and stomped his foot to the opening notes.

“That’s definitely not going to happen,” Harry assured the crowd, as he then gestured to Miranda. “He did try, but I said no.”

Prince Harry then thanked the crowd for a successful fundraising evening. “You have, together, raised a huge amount of money to change the lives of thousands of children in Botswana and Lesotho, and through that work that we’re going to be doing now, we will be able to stop the generational hand-down of the stigma of HIV.”

The special gala performance was a fundraiser for Sentebale, a charity founded by Prince Harry and Prince Seeiso of Lesotho to help children and young people affected by HIV. According to the BBC, the show raised £300,000 (approximately $400,000 USD) for the charity’s initiatives.

Harry and Markle took some time after the performance to meet and talk with the cast, including the actor who played the king, Michael Jibson.

What do you think of Harry’s (brief) musical performance? Let us know @BritandCo!