18 Smoothies to Transition You into Fall 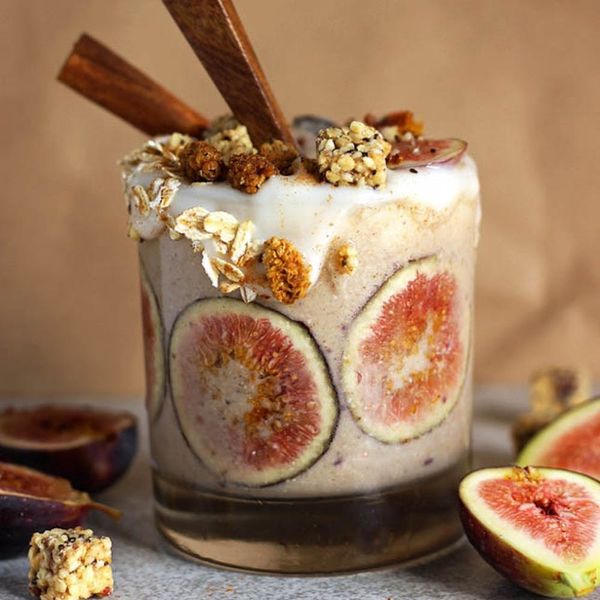 Smoothies are a cool summertime staple that serve as a refreshing snack, or a healthy breakfast in a pinch. But that doesn’t mean you have to put your blender away once fall rolls around. Fall smoothie recipes are just as good as the summer versions, only with a switch of seasonal fruits and veggies. Even winter produce smoothies will be here before you know it! Get ready to tackle the farmers’ market, because these 18 smoothies will provide a smooth transition from summer to fall.

1. Fall Greens Smoothie: Green smoothies are a necessity no matter what time of year it is. Even though you can get most fruits and veggies year-round, this one uses seasonal kale and pear to get the most out of their nutrition. (via Danette May)

2. Immune Booster Orange Smoothie: You know fall is officially here when everyone starts getting sick. Boost your immunity naturally with this smoothie that’s full of vitamin C, vitamin A and beta carotene. (via Minimalist Baker)

3. Apple Crisp Smoothie: If you can’t have actual apple crisp for breakfast, this smoothie should do the trick. Greek yogurt, apples, oats and cinnamon are all used to mimic the classic flavors of your favorite fall dessert — and it’s pretty darn close. (via The Recipe Rebel)

4. Healthy Banana Cream Pie Smoothie: Banana is pretty standard in smoothies, but adding vanilla wafers takes it to a whole new level. Treat yourself to a squirt of whipped cream on top and you’re pretty much drinking a healthy dessert for breakfast. (via Baker by Nature)

5. Butternut Squash Smoothie: You’re probably thinking it’s crazy to put butternut squash in a smoothie, but hear us out. Once it’s roasted and blended with cinnamon and vanilla, it tastes just like pie. If that doesn’t convince you, nothing will. (via Wholeheartedly Healthy)

6. Salted Caramel Apple Cinnamon Smoothie: TBH, this smoothie is more like a milkshake, but we can totally get behind that. A touch of caramel and sea salt go a long way to make this treat out-of-this-world delicious. (via Maebells)

7. Caramel Apple Overnight Oatmeal Smoothie: If you’re looking for a hearty breakfast you can enjoy on the go, this smoothie is it. It has the heartiness of a bowl of oatmeal with a caramel apple flavor that will have you guzzling it. (via Running With Spoons)

8. Creamy Fig and Cinnamon Fall Smoothie: We’re only #blessed with fresh figs for a short window of time, so we have to use them while we can. Top this smoothie with granola and seeds for an Insta-worthy presentation. (via Neurotic Mommy)

9. Gingerbread Breakfast Smoothie: You may think gingerbread is exclusive to Christmas, but you’ll change your mind once you try this smoothie. It’s warm, comforting and perfect for a cold fall morning. (via Running With Spoons)

10. Healthy Salted Caramel Mocha Smoothie: Say goodbye to your local Starbucks, because this is your new go-to morning beverage. It’s healthy enough to eat for breakfast, but it also has enough caffeine to get you by until lunch. (via With Salt and Wit)

11. Healthy Peanut Butter Cup Smoothie: You won’t even be able to tell this smoothie is good for you. Layer the peanut butter on the bottom and the chocolate on top for a true peanut butter cup effect. (via Fit Foodie Finds)

12. Pumpkin Chai Smoothie: We couldn’t show you fall smoothies without bringing out the big guns. Pumpkin is the MVP ingredient of autumn, and it’s just as delicious in this smoothie as it is in a pie. In fact, the chai tea spices make it taste like it is pie. (via My Whole Food Life)

13. Paleo Pumpkin Coconut Smoothie: Smoothies are a great way to use up the last bit of pumpkin puree you have hanging out in the can. Blend it with pumpkin pie spice, coconut milk and a banana for a healthy version of a PSL Frappe. (via Cook Eat Paleo)

15. Coffee Smoothie: We all have those mornings where we feel like we need to combine our coffee and our breakfast just to get out the door. This smoothie does just that — and you won’t have to feel rushed. (via Diethood)

16. S’mores Smoothie: Autumn is all about bonfires and roasting marshmallows. Relive your weekend fun during the week by making this s’mores smoothie before work. It’s bound to put a major pep in your step. (via Eclectic Recipes)

17. Pomegranate Strawberry Smoothie: Once pomegranate is in season, you know the holidays are soon to follow. Get yourself pumped for all the coming festivities with this transitional fruity smoothie. (via Passion for Savings)

18. Vanilla Latte Protein Smoothie: You deserve something sweet after killing that strength-training workout. Give yourself some much-needed energy and protein recovery by sipping on this tasty vanilla latte concoction. (via Celebrating Sweets)

Paige Johnson
Paige is a blogger, food writer and culinary master from Louisville, Ky. She's a newlywed who's obsessed with dogs and renovating her 117 year old home. When she's not working on her blog — My Modern Cookery — you can find her binge watching F.R.I.E.N.D.S with a triple shot latte in-hand.
Fall Recipes
Recipes
Fall Recipes
The Conversation
Reviews:
More From Recipes