How to Pull Off Spring 2019’s Boldest It-Colors 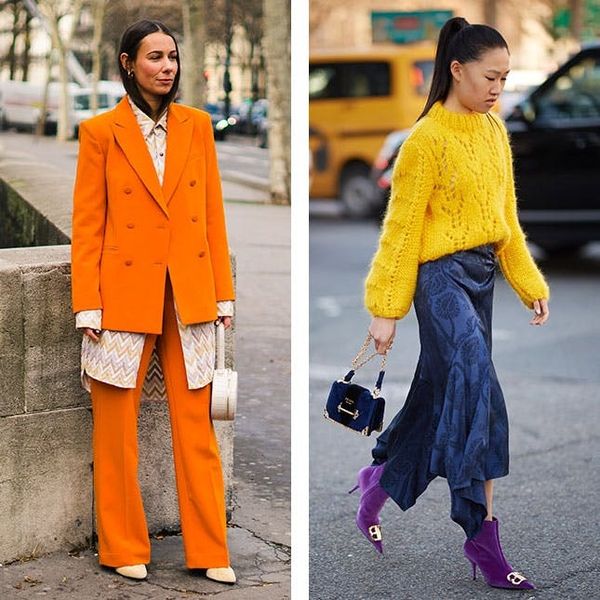 Pantone’s Color of the Year, Living Coral, isn’t the only hue infiltrating the style universe this season. There are actually four other must-try colors that the fashion crowd is gravitating towards. Swipe through to learn more about the rich yellows, greens, browns, and oranges of spring 2019 and grab a bit of outfit inspo while you're at it.
Marigold Yellow: Embrace the sunny color in the form of an on-trend power suit. (Photo via Christian Vierig/Getty)
Jump on the color-blocking train by pairing saturated trousers with separates and accessories in eclectic jewel tones. (Photo via Matthew Sperzel/Getty)
Amp up your favorite flowy skirt with a zingy knit for casual Friday or a night out. (Photo via Timur Emek/Getty)
Sage Green: Follow this style setter’s lead and go for it by rocking various shades of green head-to-toe. (Photo via Matthew Sperzel/Getty)
We basically live for a throw-on-and-go dress that’s statement-making enough to hold its own (without extras!). (Photo via Timur Emek/Getty)
Make the street your own runway by sashaying in a sage maxi skirt and complementary jacket combo. (Photo via Vanni Bassetti/Getty)
Luscious Brown: Brown accessories feel the least bit boring incorporated into a polished ensemble featuring a patterned dress and trench. (Photo via Matthew Sperzel/Getty)
Elevate a full brown skirt by mixing in a pastel knit, tan boots, and a classic coat. (Photo via Matthew Sperzel/Getty)
There’s no need to be shy of this once-drab color if you go the high-fashion route with a monochromatic suit look. (Photo via Edward Berthelot/Getty)
Tangy Orange: You’ve probably caught on by now, but a bold suit is clearly the way to go this spring. (Photo via Nataliya Petrova/Getty)
For a subtle approach to the tangerine trend, layer a cardigan in the shade with your traditional blouse and trousers getup. (Photo via Marc Piasecki/Getty)
Keep it cool and pared down with an orange crewneck, complete with side-striped pants. (Photo via Edward Berthelot/Getty)

Bobby Schuessler
Bobby Schuessler is a contributing fashion writer at Brit + Co and has contributed to Who What Wear, Refinery29, Lucky, Glamour, Out, Nordstrom, and Barneys New York. When he's not writing about style and shopping, you can find him catching up on the latest Housewives franchise and sipping his go-to drink, a vodka martini with a splash of cranberry and a twist.
Color
Trends and Inspo
Color Fashion Inspiration Pantone Spring Style Spring Trends Street Style
More From Trends and Inspo