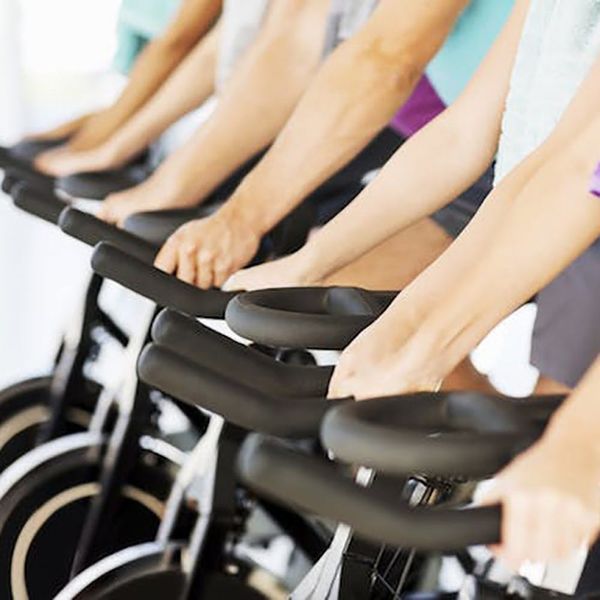 Whenever we hit a workout slump, we immediately sign up for a heart-pumping fitness class. Not only are group classes a great motivator to actually squeeze in a workout during a hectic week (hello, we’ve already paid for it), but attending a group class is actually scientifically proven to alleviate work-related stress and improve your overall quality of life. Not too shabby for a 60-minute hot yoga session! But despite all the wonderful benefits of working out in a group, there’s one significant downfall: Workout classes are a breeding ground for dangerous bacteria.

“Think about the filthy facts for a second: Human hands are hotbeds of microbes, and group workout equipment can come in contact with dozens of them every day,” says an expert at Elliptical Reviews. “Plus, sweat combines with bacteria when it reaches the skin — and participants in these classes work up plenty of perspiration.” Consider us officially grossed out.

So in an effort to measure which workout classes have the dirtiest equipment, Elliptical Reviews swabbed equipment from the four most popular fitness classes — Barre, CrossFit, spin, and hot yoga — and conducted bacterial tests to reveal the total number of microbes that appear on various workout tools. They gathered three separate swabs from each class and took the average of the CFU (colony-forming units) totals. Then, they compared it to the grossest thing they could think of: the number of CFU on the average toilet seat.

Are y’all ready to hear the results? After swabbing the equipment in the classes thrice, the researchers concluded that the barbells used in CrossFit classes were by far the grossest thing they tested, and were actually inhabited by 48 times more bacteria than a toilet seat. Hot yoga wasn’t far behind — the yoga mats contained eight times the CFU of an average loo. Spin class came in third, as the resistance knobs on the spin bikes had a negligible germ count, and the wooden bar in Barre class had similarly minimal microbes, which the researchers found particularly impressive given that the bars often come in contact with bare feet.

Perhaps even more interesting is the type of bacteria found on each piece of equipment. On the CrossFit barbells, 31 percent of the bacteria were gram-positive cocci, which is often associated with skin infections and diseases like pneumonia. Despite having less bacterial overall, hot yoga mats and cycling resistance knobs had an even greater proportion of these pernicious pathogens, with 52 and 67 percent of bacteria registering as gram-positive cocci, respectively. While the researchers didn’t find any of these harmful bacteria at Barre class, they did find a ton of gram-negative rods, which affect humans negatively and are often responsible for respiratory infections that are increasingly resistant to antibiotic treatment.

So what can we do to reduce our risk of exposure to these nasty germs? The first step is simple: Wash your hands for at least 20 seconds immediately after leaving the class. Second, the researchers recommend arriving earlier to class and wiping down all of your equipment before you use it. “Repeat the process once you’re done, of course, out of respect for your fellow exercisers,” they suggest. “After all, that sense of community spirit is part of group fitness classes’ appeal: exercisers supporting each other as they pursue better health together.”

Do you wipe down your equipment before and after using it? Tweet us by mentioning @BritandCo.

Ashley Macey
Ashley Macey is a lifestyle freelance writer who loves all things fitness, wellness, and creativity. When she's not exploring her home in the Pacific Northwest with her dog Max, you'll probably find her curled up with a good book and some hot tea. Follow her daily jaunts on Twitter.
Healthy Living
Health
Healthy Living study Workouts
More From Health