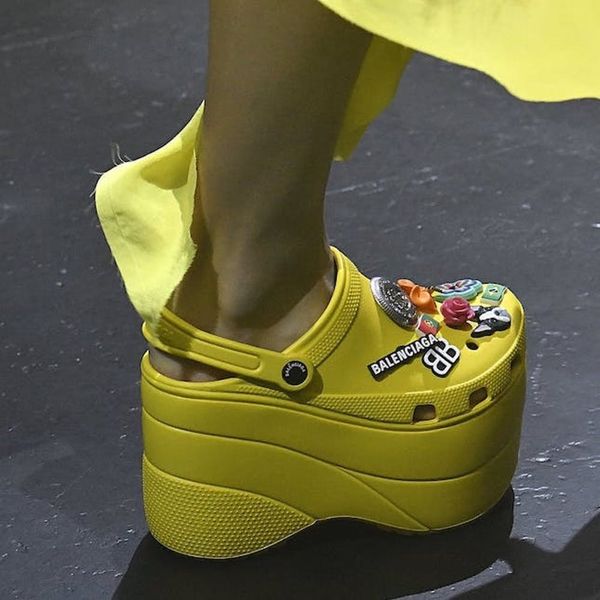 2018 was marked by all sorts of interesting trends and plenty of those surprising looks actually went the distance. That said, not all of the year’s fashion fads need to accompany us into 2019. New year, new you, right? Or at least a refreshed version of you. According to Lyst, the trends ahead made the biggest splashes in 2018. And while each of these styles had their moment in the sun, you’ll likely be ready to retire them come January 1 — so let’s have a fond look back and pour one out for 2018’s most popular looks.

1. “Dad” Fashion: Chunky sneakers reached fever pitch this year and ushered in a whole genre of fashion looks inspired by badly dressed (but still beloved) dads. Aside from bulky sneakers, slouchy cardigans, fleeces, and “ugly” shirts together experienced a 439 percent increase in views in 2018. That’s a whole lot of paternal style. This coming year, we’re expecting the madness — or “dadness” — to die down. (Photo via Edward Berthelot/Getty Images)

2. Designer Crocs: OK, we know these comfy shoes have their merits, so we will be more specific: Balenciaga Platform Crocs. The ultra-high runway version of these controversial shoes got a lot of attention in 2018, and it wasn’t just hype. The first drop of this designer collab sold out online before the shoes were even officially released, according to Lyst. We’re not saying all of those shoppers have buyer’s remorse — but we’re willing to bet most won’t be stepping out in their Balenciaga Crocs in the new year. (Photo via Victor VIRGILE/Gamma-Rapho via Getty)

3. Tiny Sunglasses: A ’90s-inspired trend that had surprising staying power, small sunglasses will be ready for a much-deserved rest in the coming year. That means it’s time to put away the Le Specs x Adam Selman pair (that dominated the category) and the almost half a million people who searched for tiny sunnies in 2018 will want to make room for a new shades shape in 2019. (Photo via Daniel Zuchnik/Getty Images)

4. Plastic: 2018 was all about transparency — at least where fashion was concerned. Consumers searched Staud’s Shirley bag over 5,000 times during New York fashion week and in February, Jimmy Choo x Off White’s clear plastic heels were among the top five most-wanted heels. The trend was undoubtedly bolstered by designers like Chanel, who sent models down the Spring 2018 runway in everything from clear boots, hats, and more, but by 2019 this quirky trend will start to feel dated. (Photo via Daniel Zuchnik/Getty Images)

5. Cropped Hoodies: Jennifer Lopez, Bella Hadid, Serena Williams, Winnie Harlow, and Kaia Gerber are just a few of the myriad celebrities who cosigned this trend in 2018. Searches for the sporty style climbed above 30,000 back in March, but we think the cropped sweatshirt hit critical mass this year, so give this midriff-baring piece a rest come 2019. (Photo via James Devaney/GC Images)