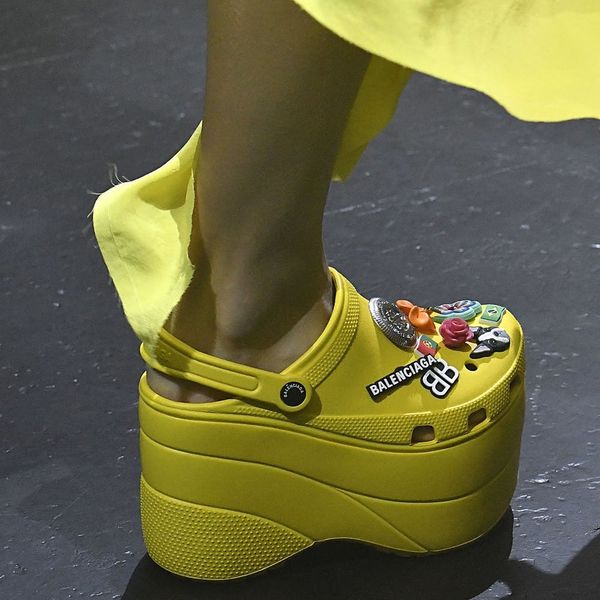 If ever you were hesitant to wear Crocs in public, we’re here to tell you that they’re *officially* cool — at least according to luxury design house, Balenciaga, and its fashion-forward fans.

The brand debuted platform versions of the rubber shoe at their Spring/Summer 2018 Paris Fashion Week show last October, where the footwear was flaunted in yellow, pink, green, and taupe shades and adorned with kitschy rubber pins (think avocados, pugs, and roses).

Critics were skeptical at the time, but apparently these puppies are all the rage now. In fact, even if you *wanted* to get in on the trend, you couldn’t: Barney’s launched the shoes for pre-order on February 1, Dazed reports, and they’re already *completely* sold out.

TBD on when the brand will restock, but you might want to set aside some cash in the meantime. At $850(!) these babies will cost you about 22 times as much as the standard version. Not to mention, this isn’t the first time the ubiquitous shoe has gone couture, so it doesn’t look like this trend is going anywhere soon. Until we win the lottery, we think we’ll stick to these *much* more affordable (yet equally as cute) kicks!

What do you think of these platform Crocs? Sound off @BritandCo!

(Photos via Victor VIRGILE/Gamma-Rapho via Getty)