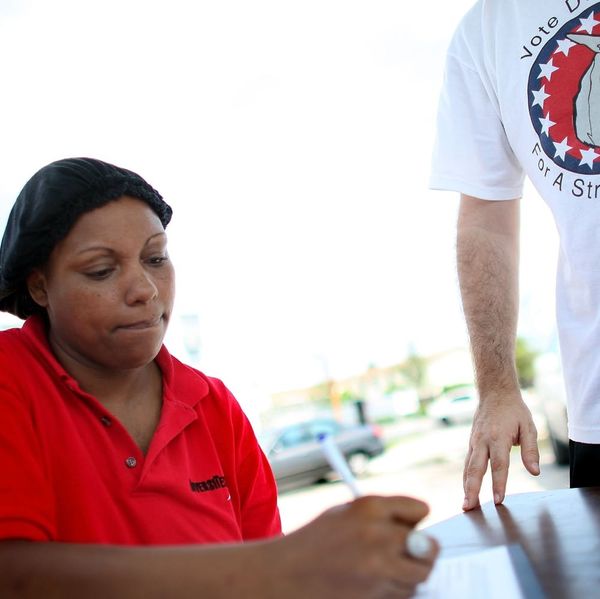 On election night, Florida approved Amendment 4, an amendment that will restore voting rights to more than 1 million former felons. The current policy requires these potential voters to wait five years after they complete their sentence and then file a request to have their rights restored, whereas most other states allow convicted felons to vote as soon as they’ve completed their sentences.

Pre-election polling showed broad support for Amendment 4, and Rihanna even put her support behind the amendment (along with Democratic gubernatorial candidate Andrew Gillum, who lost by a narrow margin to Republican Ron DeSantis). The win is a big victory for voting rights and the rights of formerly incarcerated people.

This amendment will restore voting rights for Florida residents convicted of felonies but who have completed their prison sentences. Amendment 4 will not apply to people who were convicted of murder or felony sex crimes, according to the Tampa Bay Times. The Times also reports that the amendment had bipartisan support, with endorsements from progressive organizations like the ACLU and also the ultra-conservative Koch Industries.

But the passage of this amendment to Florida’s constitution will go some way to correct this situation. Amendment 4 was driven to the ballot by Floridians for a Fair Democracy, which launched the Second Chances campaign in support of the amendment in January, according to the Brennan Center for Justice. According to the Second Chances website, Amendment 4 is a major step in “fixing” the voting system in Florida.

You did it, Florida! Amendment 4 PASSES, extending voting rights to 1.5 million previously disenfranchised people. If you’ve served your time, you should get to vote. And now you can. Congratulations to @desmondmeade, @YesTo2ndChances, @ACLU and everyone who made this possible. pic.twitter.com/FmLAL4YsUw

While the amendment had support from both liberal and conservative groups, outspoken support for the amendment mostly came from the Democrat side of the aisle among Florida politicians running for midterm elections. As the Daily Beast reports, Democratic candidates campaigned hard on Amendment 4, whereas Republican candidates mostly kept quiet about the amendment, despite the fact that it’s not a controversial policy.

Florida Democrats feel that restoring voting rights to people who have served sentences for felonies could prove beneficial in future elections, according to the Daily Beast. However, according to a Vox analysis of the voting habits of people previously convicted of felonies in states where they have voting rights, this group tends to vote at low rates and does not have a clear partisan bias. Various other methods of voter suppression likely account for why voter turnout is relatively low among those who have served sentences for felonies, and the lack of a favorite political party demonstrates that people in this category don’t necessarily constitute a uniform voting bloc that would benefit one party over another.

Still, on an evening when liberals and progressives are nervously awaiting results in Florida and around the country, a win for voting rights is a significant victory worthy of celebrating. Thanks to Florida voters, more than 1 million Floridians are now eligible to vote in future elections.

Elizabeth King
Elizabeth King is a politics, history, and culture writer based in the Twin Cities. She is generally pretty cranky but still enjoys traveling, music from the early 2000's, and plotting the resistance. Feel free to say hi on Twitter at @ekingc or check out some of her work at www.elizabethcking.com.
Election Day
Politics
Election Day Politics
More From Politics