These Office Spaces Are Inspired by Your Favorite Fonts 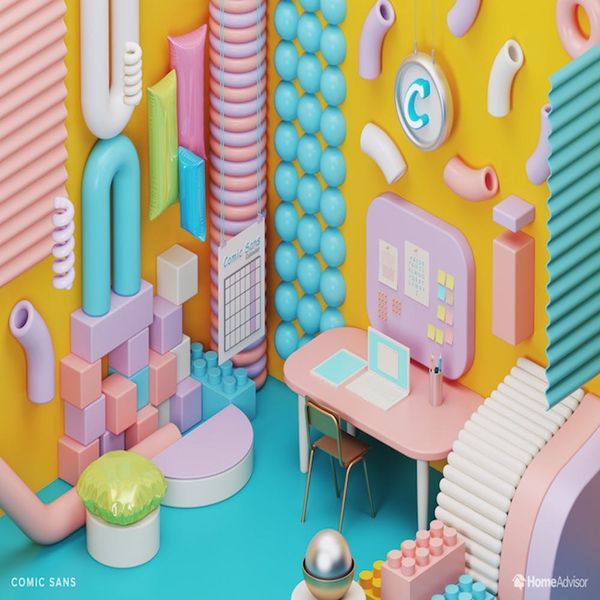 You agonize over picking just the right font for your resume, for the poster for your band’s gig, for… your office decor? That’s exactly what HomeAdvisor, in conjunction with NeoMam Studios, did, creating seven mockups of gorgeous office spaces inspired by classic fonts. Who knew typography could be so chic?

“Fonts, much like great interior design, should inspire, and not overpower,” Mike Nudelman, managing editor for NeoMam, tells Brit + Co. “They both also speak volumes about the personality of the designer. We found the two to be a natural and interesting combination.”

For example, the Helvetica-inspired space below has a minimalist, modern look. (See this font in Crate & Barrel‘s logo and, yes, on your tax return). It’s brightened up, however, with primary colors for a warmer look. “Furniture should combine straight and curved lines,” HomeAdvisor wrote. “Think functional, clean, and fresh. The ideal place to focus and clear your workload.”

The fonts they used for inspiration include Helvetica, Futura, Baskerville, Bickham Script, Cooperville Black, Courier, and Comic Sans. And no, no Times New Roman.

“We chose seven fonts that we thought would appeal to a variety of personalities and that would translate interestingly into interior designs,” Nudelman says. “We wanted the results to be creative and inspiring, and Times New Roman just didn’t make the cut.”

Nudelman says the response to the designs has a been enthusiastic. “Most people say that they’ve never thought of looking to fonts as a source of home design inspiration until now. Maybe we’ll explore other rooms in the home with a similar concept next time.”

Click over to HomeAdvisor to see all seven font-inspired office designs.