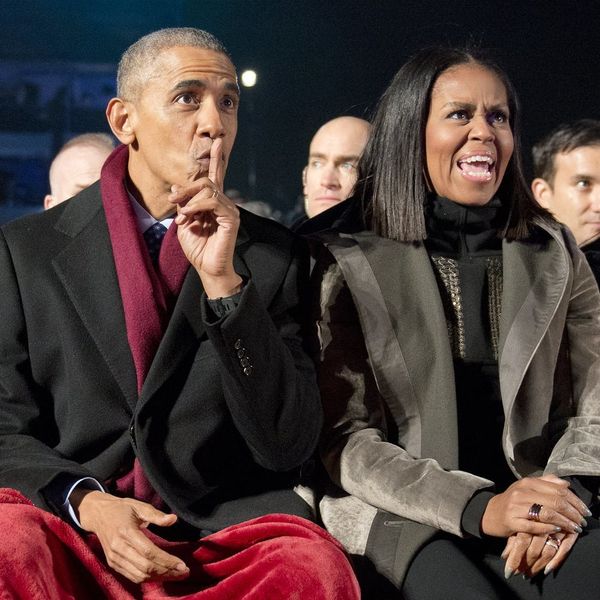 Barack Obama may have famously quit smoking while in the White House, but that doesn’t mean he hasn’t endured years of gentle ribbing over his habit, even from across the aisle. Former Republican Speaker of the House, and friend to the Obamas, John Boehner admitted in a new interview that the *real* reason Obama finally successfully quit was because he was “afraid” of former First Lady Michelle Obama.

“He’s scared to death of his wife. Scared. To. Death,” Boehner told Politico in an “Unchained” interview, when asked if he’d ever caught the ex-prez sneaking a puff in the White House. While this may not be a *secret* exactly, it’s fun to see that the politicians’ bipartisan friendship is still going strong.

This isn’t the first time 43 was teased about his former habit. Before he left office, the Obama White House created a spoof video called Couch Commander, with Obama seen trying to figure out what to do after he leaves office, and going to already-retired Boehner for advice.

After the pair watch Toy Story together, Boehner hints at Obama that he can smoke while wife Michelle is at spin class, while Obama says he’s excited to wear his “mom jeans” in peace.

But if you think Boehner is telling tales out of school, Obama himself joked to a UN official that his wife “scared” him into quitting, not realizing his mic was still on during a 2013 assembly. Michelle, however, says that the real reason her husband quit smoking was the pair’s then-preteen daughters, Sasha and Malia.

“I know that his ability to ultimately kick the habit was because of the girls, because they’re at the age now where you can’t hide,” Michelle Obama reportedly said to iVillage, according to USA Today, back in 2012. “I think that he didn’t want to look his girls in the eye and tell them that they shouldn’t do something that he was still doing.'”

Have you ever had to kick the habit? Tell us how @BritandCo!