The Pie’s the Limit With This Friendsgiving Party 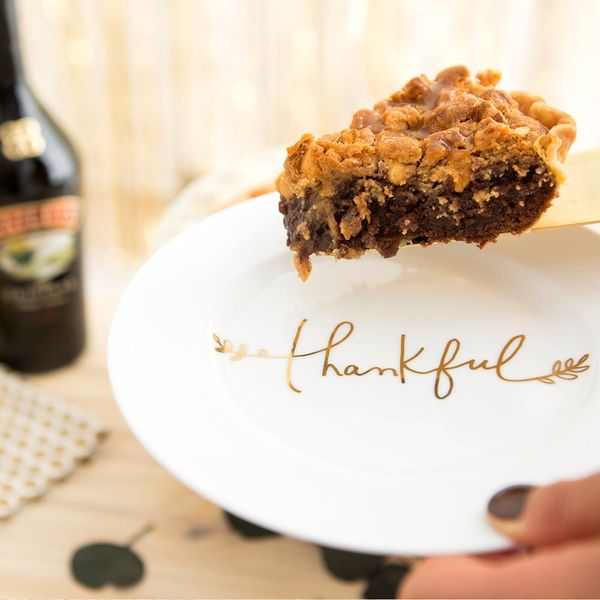 Move over, Friendsgiving! It’s time to make way for Pies-giving. This year, hold the turkey and pass the pie with a *dinner* party that will have your friends serving it pie way or hitting the highway. After all, Thanksgiving is one of the most indulgent times of year.

Going through a pie spell of ideas on how to deck out this decadent holiday? Don’t worry — we got you! We teamed up with Baileys to satiate your delights with three pie recipes that are worthy of your appetite. What better way to indulge than with Baileys’ sweet and super creamy palate pleaser? So, get your ride or pies together and read on for some guidance on one delectable pie party.

The pie’s the limit with this decadent pastry. Don’t worry about saving room for dessert when it’s being served as the main course.

Make the super peanut buttery crumble first by mixing together the peanut butter, ¼ cup butter, ½ cup flour, peanuts and ¼ cup packed brown sugar. Place it in the freezer to stiffen up, while you prepare your other ingredients.

Melt the chocolate and remaining butter in the microwave by heating up in 30-second intervals for a minute to a minute and a half. Add the remaining brown sugar, granulated sugar, cocoa and salt, and mix in the Baileys. Fold in the eggs one at a time, and then, slowly add the remaining flour into the mixture and stir until smooth.

Lay the pie crust into your pan and crimp the edges with your fingertips. Pour in the chocolate mixture and then top off with your stiffened peanut butter crumble. Place in the oven for 50 minutes and then cool on a rack for at least 20 minutes.

Once your pie is cooled, top with your caramel syrup and sea salt flakes.

Cut into that bad boy and serve!

This no-bake recipe is easy as pie. It’s so heavenly and fluffy — it’s like eating a cloud.

Separate your egg whites and make sure that there’s no trace of any yolk. Whisk together until it starts to peak.

In a separate bowl, melt the chocolate with ¼ cup of heavy cream in the microwave and stir in the Baileys. Set aside to cool.

Mix the remaining ¾ cup of heavy whipping cream in a stand mixer until the cream starts to form peaks. Begin to fold the chocolate into the whipped cream, half at a time. Mix gently to not deflate the cream. Next, add your egg whites and be sure not to overmix. Once the mousse is smooth, place into a pastry bag and chill for at least two hours.

Finally, construct your pie jar! Finely crush the graham crackers in a food processor and then, mix with the butter. Add a layer of the graham cracker crust to the base of your jar. Next, layer with your Baileys mousse and some fresh whipped cream. Add a little shaved chocolate for a little extra pizzazz, and enjoy!

Any slice topped with this whipped cream is sure to be the apple of your pie.

Pour the heavy whipping cream into a stand mixer and whisk until the cream starts to stiffen. Add the vanilla and sugar while the cream is mixing.

Add the Baileys Irish Cream and mix until the cream starts to form peaks.

Pop the cream into a pastry bag and you’re ready to top any slice with this tasty treat.

Break me off a piece of that!

This season, be a real pie-oneer and serve up a new trend for you and your friends. And for goodness sake, let them eat pie!

Lindsay Saito
As a Creative Content Producer at Brit + Co, Lindsay is a mover and shaker—cooking, crafting and creating—all day, every day. While away from the office, you can find her adventuring, looking for magical moments and eating tacos.
Friendsgiving Ideas
Recipes
DFP Friendsgiving Ideas Pie Recipes Sponsored Thanksgiving
The Conversation