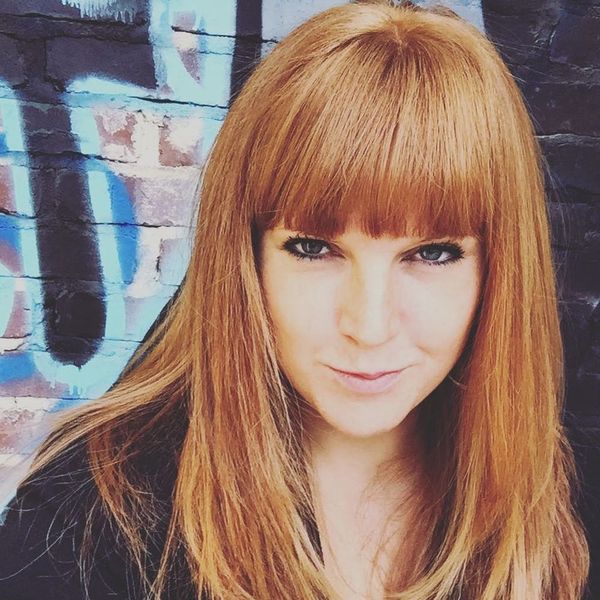 If the modern body-positivity movement has taught us one thing, it’s that a person’s worth is not determined by their body shape or size. But sometimes society forgets that — and it takes a real boss to step up and remind us. Enter Cassie Young and her EPIC bride-shaming shutdown.

Young is a radio personality and podcast host from Atlanta, GA. She recently got engaged, and when she shared the good news on Twitter, a personal trainer reached out about getting in shape for her upcoming wedding. She was, understandably, not having it.

Our ten year anniversary is a heartbeat away but we just signed up for forever. 💍
Ps. I totally won #Cassopoly pic.twitter.com/mhLPjS8Y1E

Young didn’t have a problem with the initial pitch, explaining to the trainer that she was already happy with the way she looked and thanking them for their offer. That’s when the conversation took a turn for the inappropriate.

The trainer, whose name Young did not reveal, started shaming Young for not wanting to look her “best,” and all but called her a liar about being happy with her body.

This guy reached out to me on Twitter with a pitch, and it spiraled into something else. I’m posting this because I want every woman and man to know that it does not MATTER what you look like. (I'm blue. He's gray. Swipe to read.) You are worthy. Love is out there for you. Life is waiting with open arms. It doesn’t matter if you’re skinny or fat or between the two or willowy or broad shouldered or peer shaped or like a board or anything in between. You get good stuff in life by being YOU. That's what matters. If you think of life as a “game” with being skinny as how you “win,” this guy is offering to play by the rules and get you there. I’m telling you the game is BOGUS. You don’t need the game. I reject the game. I REFUSE TO PLAY. It’s a fake construct that you can step outside of. Your inner-value and self-worth comes from YOU, not what you look like. Who gives a f**k if you got a few extra pounds. Or ten. Or twenty. Thirty. Whatever. If you are happy and healthy, that’s ALL that matters. Those pounds DO 👏NOT 👏DEFINE 👏YOU 👏OR 👏YOUR 👏WORTH. Don’t let people like this try to convince you otherwise, because they’ll try - but it’s because they don’t understand yet. They’re caught up in the game and can’t see it for what it is. You can. Life is waiting for you. It's too short to be spent worrying about a belly roll. Go be happy and live it to your fullest.

Young was quick to articulately shut them down. “I’m constantly shamed or reminded that I’m heavy and I should be embarrassed,” she wrote. “Health is one thing, and it’s something I’m working hardcore on. But the idea of me being embarrassed by my wedding pictures because I might be ‘fat’ in them? F**k that noise!”

She shared screencaps of the conversation — equal parts infuriating and inspiring — on social media with the important message that your appearance does NOT define your self-worth. The post went viral, and Young says the support she received has been overwhelming (in a good way!)

“It’s SO easy to be an anonymous keyboard troll online,” Young told Brit + Co in an email. “The fact that complete strangers were showing up from all over with kind comments, with similar struggles, with positivity — it was not only eye-opening, but really uplifting.”

👈👈👈 HATERS TO THE LEFT. I’ll be honest, yesterday the trolls got to me for a hot minute. Their comments didn’t hurt my feelings so much as stole my faith in the world. I was shocked that people could be SO cruel and SO nasty, and I wondered why we should even bother about fighting against this cold, biter, heartless Army Of The Dead. . And then you reached out. And you. And you and you and you. You told me your stories of ordering your first two piece. Your battles with eating disorders and self-acceptance. The struggle with loss in your family and weight gain because of depression and how you battle it every day, head held high. Or going into the water in a bathing suit to play with your kids and make memories for the first time instead of hiding under a beach towel. Or stories of your kids, who see the world through innocent, honest eyes, and don’t get what the problem with being overweight is (because to them there is no problem.) Or the heartbreaking stories of how you or your daughters or sisters were on the precipice, and all they needed to realize was that fat is literally just an adjective, and not a judgment on who they are as a person, and now they’re getting married. . Thank you guys. You drowned out the trolls. You checked on me to make sure I was ok. You slammed the haters and showed me the light again. Texts, Tweets, Emails, DMs, Facebook Messages. There’s not even a comparison to the level of love I have seen on the internet from @TheBertShow community - my radio family - and from absolute strangers. . If you are struggling, know we are out there. Not only the outspoken protestors, but also the silent allies. We will stand tall with you and we will win this fight. I promise you. . EVERY body is beautiful. . This photo is for you, trolls. Eat your ❤️ out. . . . #EffYourBeautyStandards #EffYourBodyStandards #MYPerfectBody #LoveYourBody #IAmWhoIAm #HatersGonnaHate #BodyPositivity #LoseHateNotWeight #LoveYourself #BodyPositivity #EverybodyIsBeautiful #HealthIsWealth #SelfLove #HonorMyCurves #CelebrateMySize #TheRealMe #BBW #SelfAcceptance #RealBeauty #IAmGoodEnough #IAmWorthy #LookWhatYouMadeMeDo #AllTheHashtagsBecauseThisIsImportant 📷: @ownboudoir

Many people struggle with body image issues. While the cultural tides are turning and all body types are being increasingly celebrated and represented, there is still a lot of work to be done. Young knows that the journey to self-acceptance is not an easy one, but she says it’s worth putting in the work.

“You have to keep coming back to the notion that you are enough,” she says. “In the grand scheme of life, you are the one who is by your side through EVERYTHING. You have to be your own cheerleader. Once you start to find your validation within yourself, the rest is a piece of cake.”

Happy 1st day of classes to the newest generation @EmoryUniversity​ students! Learn everything you can from the classroom, but know there's even MORE to learn from the people around you and the experiences you're offered. Say yes to everything. Take risks. Stay open-minded. Go out there, take it all, and CRUSH IT. Can't wait until you're @EmoryAlumni​...but I know we've got a little while to go. 😉 #Classof2020 #Dooley4Life 💀 #WeWorkHarderPlayHarder #ImIn #BertShowLove

“Also,” Young continued, “haters are miserable people who are unhappy with themselves. So whenever you see nasty comments from them, feel bad for them, because they are miserable, and you have something they don’t: true self-confidence and happiness.” Truer words.

What do you think of Cassie’s response to the pushy personal trainer? Let us know @BritandCo!