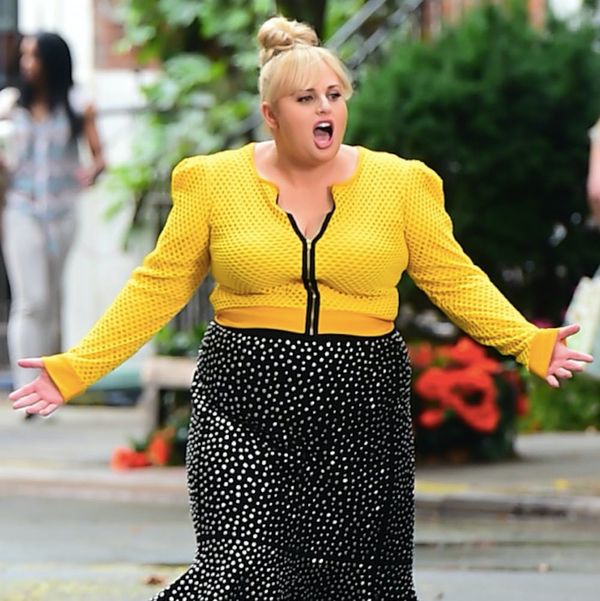 The body-positivity movement has made major gains in a lot of areas over the last few years. From the serious upswing in trendy new plus-size labels that have entered the fashion market to a collective of high fashion designers who’ve finally begun to include models of varying sizes and shapes in their runway shows to body-positive manifestos penned by brilliant (and hilarious) writers like Roxane Gay and Lindy West, it seems like we’re well on our way to becoming a less judge-y society… except in one very important, very high-profile place: Hollywood.

For every story about Melissa McCarthy’s success or how rad Rebel Wilson is, there’s another one — like this Guardian article about a Hollywood studio calling in an “emergency” personal trainer to provide on-camera proof of Prince of Persia actor Gemma Arterton exercising — that makes you want to face-palm times infinity.

“There was one day,” says Arterton, pointing out some serious irony, “when I went to get some snacks, they have like snacks on set, and I went to get some apricots, some dried apricots and the man, this big, fat, obese producer went: ‘I hope you’re not going to eat that.’”

Can a body-positive vibe ever really take hold in a place where actors are chastised for eating a handful of dried fruit, or is the industry only willing to embrace that token full-figured actor so that they can point to her (or him, but way more often her) as an example of their alleged inclusivity?

Arterton isn’t alone in her experience with on-set body-shaming. Chloë Grace Moretz experienced a similar type of harassment when she was just 15. “This guy that was my love interest was like, ‘I’d never date you in real life,’ and I was like, ‘What?’ And he was like, ‘Yeah, you’re too big for me’ — as in my size,” she said in a recent interview with Variety.

Even Rebel Wilson, a comedy icon and an outspoken role model to her plus-size fans (and a collaborator behind a seriously cool 2015 Torrid collection) has been on the receiving end of some pretty questionable treatment in Hollywood. Earlier this year, Pitch Perfect fans called out the costume designers of the franchise’s third movie for dressing Wilson differently from her matchy-matchy co-stars. While the wardrobe choice could have been Wilson’s own, it does raise questions — even if it’s just about why she wanted to be more covered up than the rest of the cast.

Sailing through the day #PitchPerfect3

While some people might be tempted to dismiss the film industry as vain, superficial, and even inconsequential (it’s true that they’re not actually saving lives on the sets of superhero movies), the reality is that acting is a profession — one where women are afforded far fewer opportunities than their male co-stars. Why can John Goodman and Jonah Hill have long, successful careers while actors like Gabourey Sidibe struggle to consistently land leading roles (and on the heels of Oscar-winning performances, no less)?

The body-positivity movement can’t fix all of our prejudices about size and shape instantly — it’s a process, and there are going to be leaps forward and frustrating setbacks along the way, both for individuals and for industries. That said, c’mon Hollywood, it’s time.

What do you think about Hollywood’s track record of body-positive inclusivity? Tell us about it on Twitter!

Corrina Allen
Corrina Allen is a film + television + travel writer from Toronto. Her journalistic goals include a backstage interview with David Byrne, the fictional character she identifies most closely with is John Wick, and her favorite dead person is Vladimir Nabokov. She never, ever Instagrams photos of her food (just her dog).
Body Positive
Diversity
Body Positive Every Body inclusivity