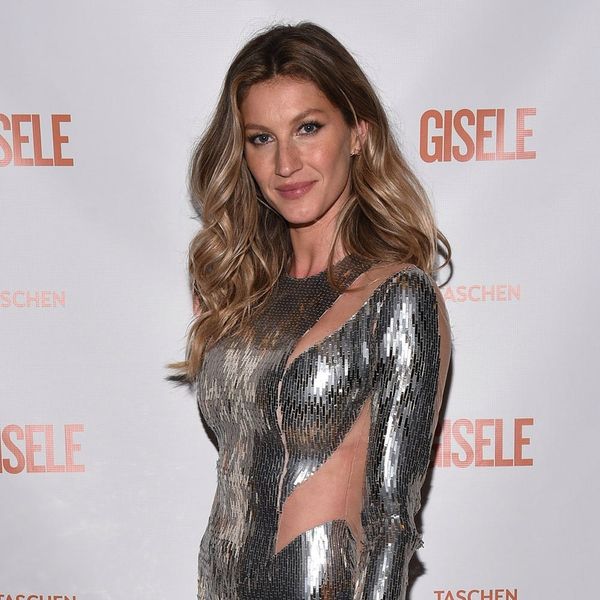 Gisele Bundchen may have taken her last *official* strut on the catwalk back in April when she retired after 20 years of slaying the runway, but tonight, the supermodel took time off from playing with her adorable new pup and spending time with her husband of seven years, Tom Brady, to wow us all one more time as she worked the world stage at the opening ceremony of the 2016 Olympic Games (are you following along on Facebook?).

Actual Olympian though she is not, she DID set a record for the longest runway ever walked with her stroll. The Brazilian stunner is also considered a gold medalist in her industry, especially in her home country, where the events are being held, so the choice was only fitting.

Gisele did not disappoint, proving once a Victoria’s Secret angel, always a VS angel. “Angelic” is, in fact, the only word we could possibly use to describe how she looked walking in her metallic Brazilian-designed Alexandre Herchcovitch dress (complete with Angelina-esque thigh slit) to the tune of “The Girl from Ipanema.”

It was a wise choice by the beauty herself, who not only handpicked Alexandre to make the jaw-dropping gown, but actually had a hand in the design process. “She was always present in the process,” he recently told Vogue. “She gave important opinions, and we thought about the parts together. She made some important changes.”

After four meetings, the dress was ready, and from what we just saw? The duo nailed it, as did she: Girl’s DEFINITELY still got it.

See for you yourself and watch her walk in its entirety below!

What did you think of Gisele’s dress? Share with us over @BritandCo!

Nicole Briese
Nicole is the weekend editor for Brit + Co who loves bringing you all the latest buzz. When she's not busy typing away into the wee hours, you can usually find her canoodling with her fur babies, rooting around in a bookstore, or rocking out at a concert of some sort (Guns N' Roses forever!). Check out all her latest musings and past work at nicolebjean.com.
Olympics
Celebrity News
Olympics Victoria's Secret