‘Good Girls’ Recap: NBC’s Crime Dramedy Gets Off to a Rip-Roaring Start 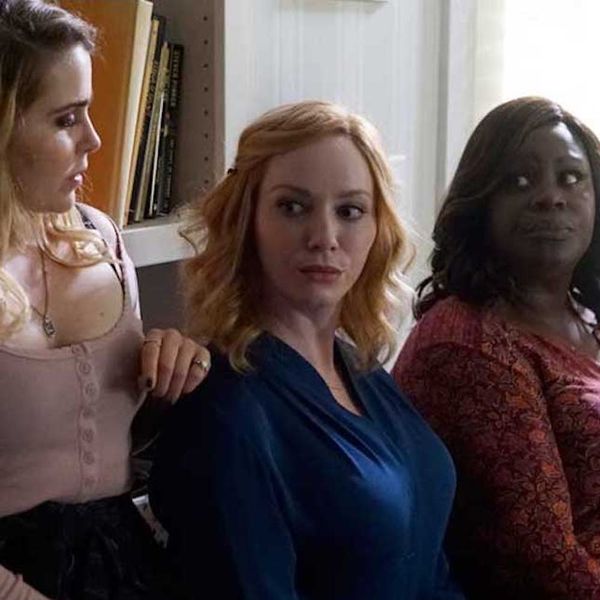 Welcome to Good Girls — it’s about to be your new favorite show, readers. I’ve seen the first two episodes and I’m all in. The cast is incredible (especially the three leads, though the supporting characters are no slouches either), the writing is sharp, and the plot is a lot of fun while still being grounded in some serious issues. Let’s jump right in and meet our new besties, shall we?

Here we have Beth (Christina Hendricks), the woman with the most seemingly perfect life on the surface — a successful husband who seems like a good father, four beautiful kids, a lovely home. But it turns out that Mr. Good Husband, Dean (Matthew Lillard), is having an affair with some young blonde who works at his car dealership. Not only that, but what’s worse, in a practical sense, is that he has mismanaged their finances to try to help his business, and now they can’t pay their bills and might lose the house.

Annie (Mae Whitman) is Beth’s little sister, a single mom who works as a grocery store clerk. Her ex Greg (Zach Gilford) has moved onward and upward to a new wife and a giant new house that could probably fit four (or more) of Annie’s small apartments inside of it — and now he’s suing her for custody of their daughter, Sadie (Izzy Stannard).

This is definitely the most heartstring-tugging situation, as Ruby (Retta) actually does have a wonderful husband, Stan (Reno Wilson), and home life. The only problem is that her daughter, Sara (Lidya Jewett), has a life-threatening kidney condition and desperately needs a transplant. While they wait for a donor match, there’s a new medicine that could really help Sara, but a month’s worth of doses costs roughly $10,000.

Once the women collectively realize they all need money, they decide to act on Annie’s half-joking idea that they rob the Fine ‘n Frugal (the grocery store where she works). But her type-A sister won’t let them go off completely half-cocked. They tackle the robbery at more like three-quarters-cocked — they definitely don’t think of everything, but for first-time felons, they do pretty well.

But there are two little wrenches in the works. First, they thought they would end up with about $30,000 total, so 10K apiece. But they actually end up with half a million. They all celebrate at first, but that should definitely be raising a red flag with them. It certainly did for me upon first viewing of this episode.

Sure, a large, high-end grocery store might have $500K in the safe (though that still seems high, especially because nobody carries cash nowadays), but the piddly little Fine ‘n Frugal? No way.

Secondly, when Annie is emptying the safe, her lecherous creep of a boss, Boomer (David Hornsby), sees her lower back tattoo and knows it’s her. This is where things get real.

At first, the women are flying high on the adrenaline of what they did and the sudden windfall they have because of it. Ruby buys her daughter’ medicine, Annie buys a new car and a new laptop for Sadie, and Beth pays her husband’s mistress to leave town (and also makes a mortgage payment). But then Boomer starts harassing Annie, wanting to blackmail sex out of her in exchange for not going to the cops with what he knows.

And then some drug dealers show up at Beth’s house wanting to talk about the money the women stole from them — because yeah, there’s no way the grocery store had that much cash. It’s in the money laundering business for actual real, scary criminals.

The women promise to return all the money (with interest), but that’s easier said than done because they’ve spent some of it already in ways where they can’t get it back. So now that threat is hanging over their heads.

But the more immediate threat is Boomer, whose attempt at blackmail and sexual assault was thwarted by Sadie the first time. But now he’s back, and the show takes a dark turn as it looks like Boomer is going to rape Annie in her apartment while Beth showers down the hall.

Fortunately, Beth hears the struggle and comes at him with one of their guns. But when he says he’s going to turn them in, she snaps and hits him with a full whiskey bottle. It doesn’t even knock him out, but when he lunges for Beth, he falls through a glass coffee table and… he might be dead.

In this day and age of almost 500 scripted TV shows to choose from, I understand that shows have to get to the action quickly — and I did enjoy the jumping around in time in this episode, showing us the robbery and then the events leading up to it. But I would have enjoyed slowing it down a bit so that we could get to know the ladies slightly better before jumping right into the hold-up. It also would have been nice to see them exhaust some other possibilities before turning to a life of crime.

Sure, it’s entertaining to watch these three ladies hold up a grocery store, but in looking at the events objectively, it was awfully easy for them to get to this point.

That being said, it’s really a minor quibble. I love the chemistry among the three women. A group that didn’t gel as well wouldn’t be nearly as interesting to watch. I also love that the show so deftly combines comedy and drama. This show is laugh-out-loud funny at times, but it is still grounded in the reality of what the women chose to do and the repercussions of that.

What did you think of Good Girls? Tell us @BritandCo!