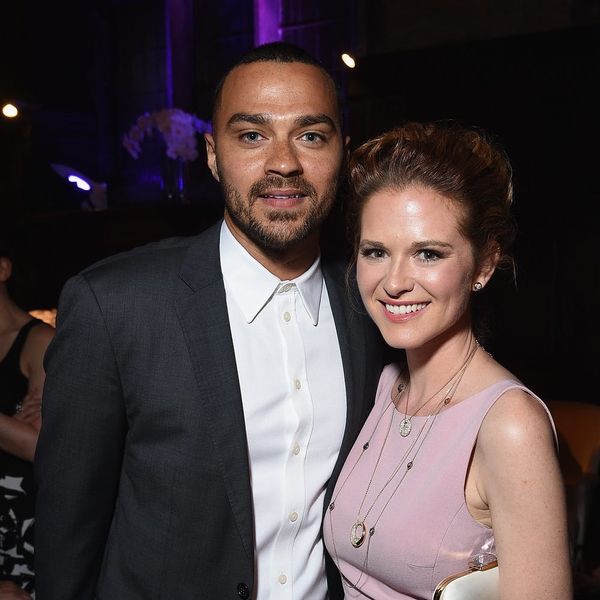 It’s a Japril world, you guys… we’re all just living in it (albeit with lots of feelings!). April and Jackson’s relationship on Grey’s Anatomy has been one of the most volatile and emotional relationships in the show’s entire history (and that’s saying a lot, considering its penchant for dark and twisty relationships). But this latest installment of Grey’s saw them at their best, which, TBH, we kinda needed after all the tension and build-up we’ve gotten over the past few eps.

First, we find out that Jackson will be flying out to Montana, where he knows his father will be, for a patient that needs a throat transplant. But Catherine, being the Best Mom ever, knows he needs emotional support and makes sure he has April by his side when he travels (despite his requests for Meredith to accompany him instead). Catherine still believes in love — truthfully, I really love that Catherine still thinks that Jackson and April belong together and could reconnect over the shared experience.

"I know that I can help your daughter." -Jackson #GreysAnatomy pic.twitter.com/gChdhQdeKF

But Jackson has a lot of issues, y’all. He’s mad that April’s going with him, and ends up stressed out over his patients, which include a brain-dead child whose organs will be donated and parents who needed to accept throat surgery for their child. He ends up at his father’s bar, where he works up a scenario in his mind in which he’ll finally confront his dad and completely wig out. He ends up drinking way too much, and misses April’s call about their throat transplant falling through: Apparently, the donor’s vocal chords weren’t viable. It’s a huge blow for the child’s parents, who believed that their daughter could have the surgery if she traveled to a different hospital — at least, they did until Jackson went MIA. Jackson, being a father himself, had built up their hopes and told them he wouldn’t risk performing a surgery that wouldn’t work. Now, the family has lost faith in the whole procedure, and April? She’s PISSED. Especially when she learns where Jackson was the whole time.

"He doesn't know his own son." -Jackson
"So make him know you." -April #GreysAnatomy pic.twitter.com/FgyCkI3nCn

Needless to say, she loses it, and Jackson can’t deal, leaving April at the bar with the owner, who reveals that he used to be a surgeon himself and that he quit because owning a bar meant he could comfort others without the risk of them dying. April quickly realizes who the man is, and tries to discuss it with Jackson, but he still feels like he can’t face his father. April knows this issue with his father is preventing him from focusing on his patient, however, so she takes Jackson back to the bar and forces him to talk to his dad.

The conversation doesn’t exactly pan out the way he wants it to: Jackson’s father is way too happy about the life he has built and doesn’t seem to miss Jackson at all. He certainly doesn’t apologize for walking out on his wife and son. Jackson leaves to discuss the issue at length with April, figuring out how to help his patient in the process.

"You're not a grandfather." -Jackson #GreysAnatomy pic.twitter.com/rDQplye6u4

April and Jackson do the whole, “amazing Grey‘s surgery” thing, where they use part of the girl’s stomach to recreate her vocal chords (talk about alternative measures!) and… success! April and Jackson are in such a good mood, in fact, they even sleep together! (Well, kind of — but given what they’ve been through, it’s enough). They talk about Jackson’s dad once more, and April tells Jackson that she knows he’s nothing like his father, because he’s always been there for her and the baby from the very beginning.

Jackson, for his part, realizes that he doesn’t need his father anymore. He appreciates Catherine for raising him the way she did, as a single parent. And you know what? I think Jackson and April are gonna be okay. (At least, I hope…)

One last note: Was Baby Harriet channeling #YesWeCan? Yes, she was!

Andrea Towers
Andrea Towers is an entertainment writer whose work has appeared in Bustle, Variety, Paste Magazine, Mashable, and more. She loves celebrity life, coffee, superheroes, and crying into her wine glass over really good programming. She lives in New York, and was previously a writer and editor at Entertainment Weekly. You can find more of her pop culture ramblings and thoughts on Twitter at @_atowers.
Pop Culture
More From Pop Culture