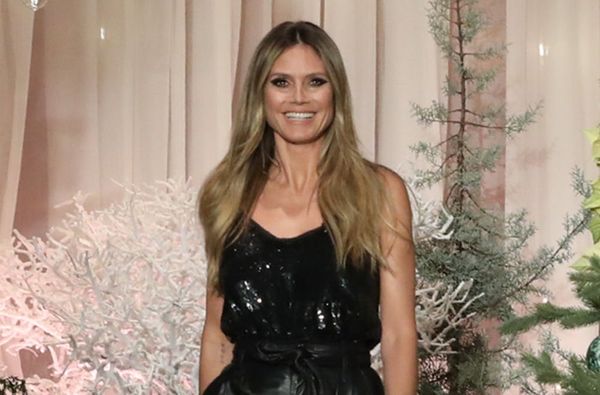 Heidi Klum probably won’t be hearing from Drake again anytime soon. After revealing on The Ellen DeGeneres Show in September that she never replied to the rapper’s texts asking her out, Klum reached out to apologize for making their non-relationship national news, and his response — which she shared on a new episode of DeGeneres’ show — was too relatable.

“I did [reach out], I said, ‘I’m sorry, because I know I made a huge wave after I was here,'” she recounted to DeGeneres on the Tuesday, January 2, episode. “And he just made [this face],” she said as she stopped smiling and skeptically raised her eyebrow.

When DeGeneres asked whether Klum and Drake had spoken in person, the America’s Got Talent judge revealed that the exchange had taken place over — you guessed it — text, and that the “God’s Plan” rapper had sent the raised-eyebrow emoji.

“That’s all he responded, is a face like that? Oh, he’s mad,” DeGeneres joked.

The texting saga started almost a full year ago, back in February, when Klum appeared on DeGeneres’ show and chose Drake as her top pick in a game of “Who’d You Rather.” A few months later, in September, Klum returned to the show and revealed that he had gotten her number from a friend after the segment and texted her to ask her out. She never responded.

“Sorry, Drake! You snooze, you lose, you know what I mean?” Klum joked at the time. “He was basically a week too late. I never texted him back because I found the love of my life.”

Klum was referring to Tokio Hotel musician Tom Kaulitz, who proposed over Christmas. Her most recent Ellen appearance was filmed prior to the engagement, but she told DeGeneres she was open to the possibility of marriage.

“I still believe in love and marriage, I do, even though I’ve failed twice at it,” she said. “I guess I’m not very good at it. [But] I found a great person, so let’s see what happens.”

What do you think of Drake’s response? Let us know @BritandCo!