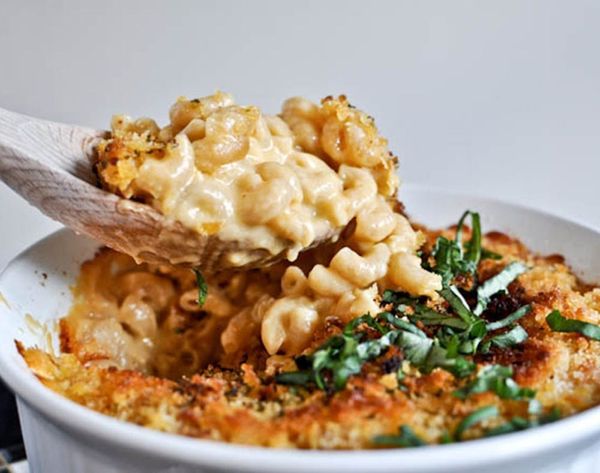 You might have grown up eating mac and cheese from the blue box, but now that you're older it's time to ditch the almost-instant stuff (complete with day-glow cheese) for a more sophisticated version. Here's the secret: Mac and cheese is so easy to make. Not to mention the fact that the variations are almost endless. We had a tough time choosing, but we found 24 of our favorites to get you started. Now banish that blue box!

Artichoke hearts give the perfect salty, briny tang to a mac and cheese recipe. What can we say? We heart it. (via TheKitchn)

We love recipes with surprising ingredients, and this mac and cheese does not disappoint. The key to it’s creamy goodness? Cottage cheese! Who knew? (via Smitten Kitchen)

We’d make this mac and cheese solely on the basis that it’s baked in a cast iron skillet. Comfort food to the max! (via A Beautiful Mess)

Have a significant other, friend, or child who refuses to eat Brussels sprouts? This is an easy way to sneak it into a meal. (via Brit + Co.)

Let’s be honest, alfredo is just another name for mac and cheese. It might be a bit classier, but it’s basically the same thing. (via Shutterbean)

If you’re sensitive to dairy, but can’t give up on this dish, try this version. We promise you won’t miss the milk! (via Love & Lemons)

We can’t wait to try this extreme twist on classic mac and cheese. We’re betting the sweet potato and blue cheese pair perfectly. (via Naturally Ella)

This is the all-time best way to serve mac and cheese to a crowd. No messy baking dish, just individual portions that guests can serve themselves. (via Brit + Co.)

Yes, you read that right — beer in mac and cheese. We're guessing this is going to be a game day favorite all through football season. (via How Sweet It Is)

Channel summer with this deliciously crispy mac and cheese recipe. All those veggies make it health food in our book. (via How Sweet It Is)

If you don’t like heavy mac and cheese try this version made mostly with ricotta, and just a sprinkling of cheddar on top. (via Food 52)

The buttery lobster and shrimp make this version incredibly decadent. (via Table for Two Blog)

Something about adding truffle oil makes a basic mac and cheese recipe seem more grown up. Making it with whole wheat pasta, doesn’t hurt either. (via Turntable Kitchen)

Along with a host of veggies, chili powder gives this cheesy recipe an extra kick. (via Kurry Leaves)

Macaroni and Cheese with Cauliflower

Another veggie that’s easy to disguise in mac and cheese? Cauliflower! When it’s baked it has almost the same consistency as the noodles. (via Shutterbean)

Short on time? Whip up this easy, delicious recipe in your microwave. We’d even serve it for a dinner party. Your guests will have no idea the oven stayed off. (via Brit + Co.)

Pumpkin Macaroni and Cheese with Bacon

It wouldn’t be fall without the addition of pumpkin to every single recipe, ever. Luckily, this pumpkin mac and cheese is good enough to enjoy year round. (via Lauren’s Latest)

Adding bacon and peas to your favorite mac and cheese recipe makes it a full meal instantly. Well, maybe you need a side salad, too. (via The Kitchy Kitchen)

Clearly we can’t get enough bacon. Can you blame us? (via Food 52)

If you want a fall flavor, but pumpkin isn’t your thing, try this butternut squash version. It’s just as tasty and just as…orange. (via Always Order Dessert)

A bit more labor intensive than the macaroni muffins, these mac and cheese balls are worth it for the crispy fried exterior. Oh, right, and they have bacon. (via Kirbie’s Cravings)

This recipe has that distinct funky tang that could only come from blue cheese. It might not be for everyone, but we love it.(via How Sweet It Is)

Adding in chickpeas and onions gives this recipe a Mediterranean flair. You can also use Israeli or pearl couscous instead of elbow macaroni. (via Food 52)

If you still believe the box is best, but want to give up all the processed ingredients, make this microwave recipe. It’s healthier so you don’t have to feel bad eating it. (via TheKitchn)

This article has been updated and was originally published in September 2013.

From Your Site Articles
Kristin Appenbrink
Kristin combines her love of words, a passion for creating, and a drive to learn new skills. Plus, as an obsessive ice cream maker and storyteller she always has a scoop to share.
recipe roundup
Recipes
recipe roundup
The Conversation
Reviews:
More From Recipes