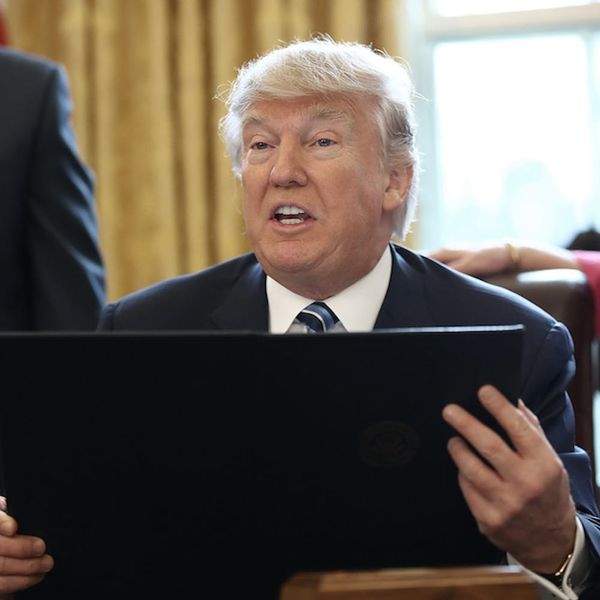 The White House has been at the center of non-stop controversies since Donald Trump was inaugurated in January. From the travel ban to unexpected retail drama and the resignation of National Security Advisor Michael Flynn, the news cycle is non-stop.

With all that’s happened (and all of the action being taken against President Trump’s administration), you might be surprised to learn that even a teeny typo can make its way into a trending item. (Then again, if you find that surprising, it’s possible you’ve never been on Twitter.) The Library of Congress recently released a commemorative 8 x 10-inch photo for sale, containing a quote from President Trump that said, “No dream is too big, no challenge is to great. Nothing we want for the future is beyond our reach.” The problem? There was a glaring typo in it. Did you spot it?

Of course, the “to great” should have read “too great.” The listing claims that this quote “captures the essence of Donald Trump’s campaign for the presidency of the United States,” which, given the carelessness of the error, has Twitter face-palming all over the place.

Get'cher official Trump print from the Library of Congress. Extra "o" in "too" available separately. pic.twitter.com/Q7OTqpCPjN

Official Trump Inauguration Poster. Sadly, the "grammar challenge" appears to be *too* great for this White House. pic.twitter.com/Oio9aEQ2t4

(Print was not made, but is sold by the Library) pic.twitter.com/2527ojaxCP

This makes us wonder about the editorial standards of the administration, which is kind of ironic, especially considering how frequently President Trump likes to criticize the media. Anyway, the print has since been removed and corrected, but you can still see the original via archive on the Wayback Machine.

Do you think this typo is a big deal? Let us know over @BritandCo.