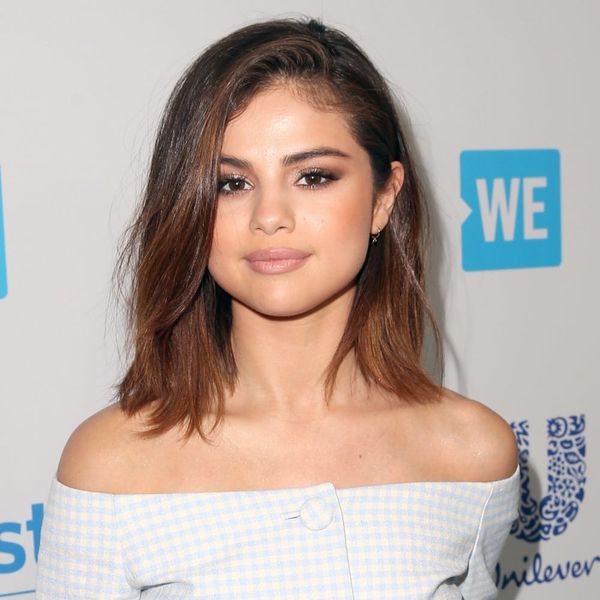 Whether or not you’ve seen it, you’ve no doubt heard the buzz surrounding what is now Netflix’s biggest original launch to date — 13 Reasons Why. Garnering more social media buzz than any of the network’s previous launches in its first week (yes, even Stranger Things!), the show is an undeniable hit.

That’s not to say it isn’t without its critics, however. With such heavy subject matter at its focus that it required the use of therapy dogs on set, the series is facing some pretty serious backlash from health care professionals, viewers, and suicide prevention groups, who say it took things way too far with the graphic death scene of its heroine.

So far, Selena Gomez , who acted as executive producer for the show, has stood behind the project 100 percent: The “It Ain’t Me” singer showed support by wearing the same shade of blue nail polish featured on the series to its premiere and even got some permanent ink with some of its cast members to represent mental health awareness.

Now, she’s addressing some of the show’s more brow-raising material with a red carpet video interview for the Associated Press. “We stayed very true to the book,” she explained to the reporter. “That’s initially what Jay Asher created, was a beautifully tragic, complicated, suspenseful story, and I think that’s what we wanted to do; we wanted to do it justice.”

As for the negative feedback, she says, “Yeah, it’s gonna come no matter what; it’s not an easy subject to talk about, but I’m very fortunate with how [the show] is doing. I’m overwhelmed. I’m very proud of it.”

Backing her up is show writer Nick Sheff, who penned an entire piece for Vanity Fair explaining why the show went as far as it did.

Still, it’s not one to watch blindly. As Paris Jackson, who has undergone struggles with self-harm of her own in the past, perhaps said it best in her summation of the show on Instagram, while “It really did a good job of showing how impactful words and actions can be to human beings…It is also an extremely triggering thing to watch. Please only watch this show with caution and keep in mind that it may put you in a dark place. If you are struggling please don’t watch it. If you think you can handle it, please by all means check it out.”

Do you think Selena Gomez handled the backlash appropriately? Voice your opinion over @BritandCo.

Nicole Briese
Nicole is the weekend editor for Brit + Co who loves bringing you all the latest buzz. When she's not busy typing away into the wee hours, you can usually find her canoodling with her fur babies, rooting around in a bookstore, or rocking out at a concert of some sort (Guns N' Roses forever!). Check out all her latest musings and past work at nicolebjean.com.
Netflix
Celebrity News
Netflix Selena Gomez
More From Celebrity News