12 Hidden Gems to Look for at Disneyland 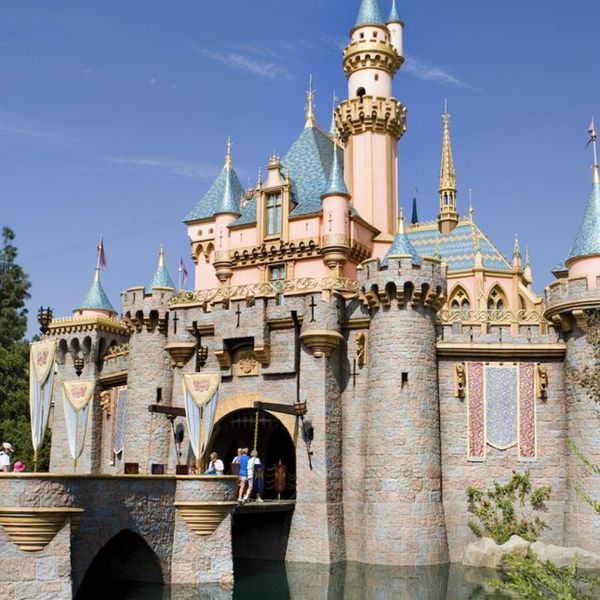 While at Disneyland, you have to keep your eyes wide open when rushing from Star Tours to yet another round on the Pirates of the Caribbean ride. Nestled all over the happiest place on earth are tiny touches that the clever Imagineers have snuck in. These minute details and magic moments are easy to overlook, but to really experience Disneyland in all its glory, you should seek out these 12 hidden gems.

1. The plants in Tomorrowland are edible. Yes, we know you want to get in line for Space Mountain STAT, but take a moment and enjoy the horticultural wonders around you. Planted sporadically around Tomorrowland are edible landscaping touches featuring plants such as lettuce and cabbage as well as lemon and orange trees. The produce may look good enough to eat, but don’t… just don’t.

2. There are Country Bears on Winnie the Pooh. This Disneyland throwback takes some effort to spot, but it’s worth it. The Many Adventures of Winnie the Pooh, in Critter Country, was built on the spot where the show Country Bear Jamboree once stood. But not all the bears were evicted when A. A. Milne’s gang moved in. While on the ride, turn your head right after the Heffalumps and Woozles scene, and look behind you (and up). There you’ll see the heads of Country Bears Max, Buff, and Melvin as a tribute to what was.

3. Wild cats live in the House of Mouse. Watch for rustling in the bushes all around Disneyland. You might catch sight of one of the notorious yet adorable wild cats that call Disneyland home. (Coolest home ever, amirite?). As one cast member told us, “They help keep the Mickey and Minnie population down.” Hilariously put. The cats that live there are well taken care of. They’re well fed, have medical care, and cast members can adopt them.

4. There’s a leprechaun house in Adventureland. Before jumping on a jeep for an adventure with Indiana Jones and the Temple of the Forbidden Eye, search for an itty-bitty Leprechaun house nestled in the landscaping between the Indy attraction and Tarzan’s Treehouse. This is the cozy abode of Patrick Begorra, a leprechaun who came to fame in The Little Man of Disneyland, one of Disney’s Little Golden Books.

5. Spot the meaningful symbol on Walt’s tie. Right smack-dab in the middle of Disneyland resides the iconic “Partners” statue featuring Walt Disney and his pal Mickey Mouse. If you look closely, you’ll see a tiny symbol on Disney’s tie. While it does resemble a Japanese character, it says “STR,” which stands for Smoke Tree Ranch in old Palm Springs, where the Disney family had a vacation home.

6. There’s a cigar store Indian on Main Street. Most walk right on by it, but on Main Street, there lives a classic cigar store Indian — once a mainstay of old school America shopping districts. Once upon a time, he welcomed shoppers to the Disneyland Tobacco Shop, which carried cigarettes, pipes, and tobacco paraphernalia. The store was in business around the time when Disneyland opened and stayed open until 1991.

7. Search out the popcorn people. If you yearn for popcorn, you might have already noticed the whimsical popcorn people toiling away at the various kiosks around the Magic Kingdom. If not, then you’ve got to check them out. Each one of the popcorn carts is overseen by a tiny figure who cranks a mini popcorn machine. See if you can spot Davy Crockett, the Abominable Snowman, and Oogie Boogie from A Nightmare Before Christmas.

8. Wonder at the Main Street windows. All along Main Street, you’ll notice various painted windows. While some are windows that pertain to the gift stores and eateries within, if you look up, there are a bunch that are actually whimsical tributes to those who made Disneyland what it is today. Here are just a couple: “Small World Costume Co. — Alice Davis — Seamstress to the Stars,” and “Two Brothers Tunemakers — Richard M. Sherman and Robert B. Sherman — “We’ll Write Your Tune for a Song!” (Photo via Disney Parks Blog)

9. Talk to the Evil Queen. By the entrance of Snow White’s Scary Adventure, you’ll find a brass book of spells alongside a matching golden apple. If you rub the shiny metal fruit, the Evil Queen will cackle and give you a warning about what’s to come (in the ride, that is). You’ll also want to look up at the curtained window above the ride, since ever so often the Evil Queen will part the curtains and look upon the crowds (and hopefully won’t be cursing us all).

10. Mary Poppins fans need to take a ride on Jingles. Jingles isn’t your ordinary carousel horse. She’s super pretty and oh-so-special. The hand-carved Jingles is covered in gold bells (hence the name) and is considered to be the “lead horse” of the menagerie of animals on the King Arthur Carousel. During Disneyland’s 50th anniversary celebration, the horse was dedicated to Mary Poppins during a ceremony with Julie Andrews. Details were added with illustrations of Mary, umbrellas, and a “JA” for Julie Andrews. And yes, you totally get bonus points if you dress up as everyone’s favorite nanny when you go for a ride.

11. Look for the Club 33 doors. There are two different sets of Club 33 doors: the old ones and the new ones. Both are beautiful and have little buzzers that club members use to access the members-only restaurant and bar (and the only place where liquor is served in Disneyland). Impress your friends and neighbors with a photo of yourself in front of the infamous entrance. And consider yourself lucky if you’re ever able to be ushered in — it’s an incredible experience.

12. Watch where you’re walking. Your eyes may be focused up, looking at all the wonders around you, but you should also look down for the occasional Mickey magic that may cross your path. Throughout the park, street sweepers will form Mickeys on the ground with fallen leaves, or a custodian might draw a familiar character with water. You never know where and when Disney whimsy will pop up next!

Which one of these hidden gems have you noticed before? Tweet us @BritandCo!