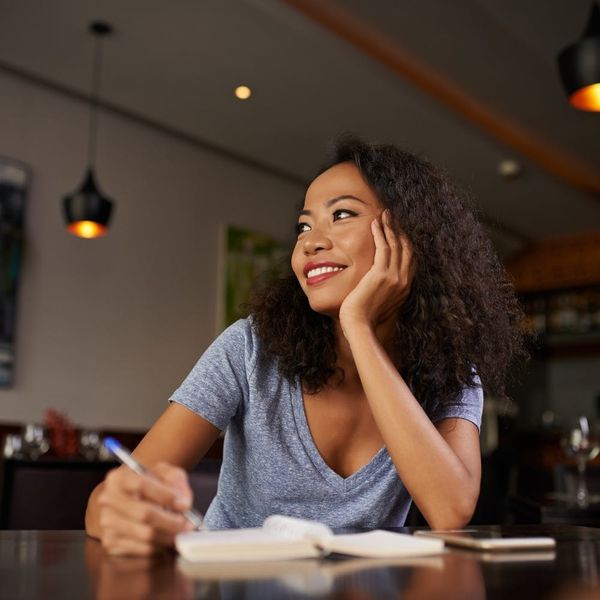 It was one of the first really warm spring days of the year, and the clock in our eighth grade French class felt like it was doing that thing they do in cartoons where they spin so slow they’re nearly going backwards. I was antsy for the bell to ring and overdressed for the weather, both of which were making me squirm in my seat. I asked the teacher to go to the bathroom. Once I arrived in the stall, I was terrified to discover that it wasn’t just the heat making me feel bad: I’d started my period.

Most of my friends had already gotten their periods by the time I got mine. One girl in our class got hers when she was 10, and while no one else seemed very scandalized by this, I — still period-less at an ancient 14 years of age — found it unbelievable. Ten! When I was 10 I still played house with my siblings and Barbies with my best friend. My brain couldn’t reconcile the difference between the two of us. Most of the girls also had bigger (see: any) boobs than me, more of an interest in dating and went to co-ed parties way before I even cared enough to ask for permission. I usually hung out with my tight-knit group of best friends or was at home taping music videos off the TV.

It wasn’t that I was immature — boring, maybe, but I was a pretty responsible kid. I was respectful to my parents and others, helped out with whatever I could around the house, and was always near the top of the class. When I was in the first grade, my teacher thought I was a little ahead of my classmates and gave me second grade math book to work from. A girl on my bus made fun of me but my mom assured me it was a good thing. Looking back, it might be the last time I had a head start.

Here are some of the other symptoms of late-bloomer syndrome that developed after the late-breaking period: Starting college late, when I was a few years older than all the other freshmen just starting out. Falling into and out of random jobs for years with no career goals. Not having my first drink ’til I was in my 20s. Going back to school in my late 20s. Always being a bridesmaid — technically, a two-time MOH and two-time bridesmaid — but never a bride. Realizing old friends are now parents to almost-teens while I still don’t have kids. Getting my driver’s license for the first time at 22. Letting it expire. Finally getting a learner’s permit again five years later. Not having health insurance. Not having a savings account. Still being the oldest one in my friend group, just like in college.

Even before the days of endless social media self-comparison, about once a month or so, my internal panic about all the ways I wasn’t measuring up would reach fever pitch. I’d lay awake overthinking every single plot twist in my life, where it went wrong to leave me so far behind, or what I would do over if given the chance — a cycle not unfamiliar for many aimless 20-somethings.

I’d then feel guilty for worrying at all about my safe, comfortable life, and I’d constantly remind myself how good I had it. I would distract myself on particularly bad days by focusing on tangible goals that would be easy to tackle — finishing an article or even just cleaning my bathroom (truly one of life’s most satisfying tasks). I didn’t talk much about the way I was really feeling, not only because of the guilt, but because I didn’t want to give it any more attention or make it any realer. I carried on, ultimately happy day-to-day, but unsure about almost everything.

It was during a quick catch-up with a friend one evening, while she told me all about the exciting projects she was launching, the traveling she was doing, and the cool work opportunities she was getting, that it became clear I needed to practice what I preached. She seemed underwhelmed by all her accomplishments, less a symptom of her own ambition and more, it seemed, a feeling of needing to keep up. A bit shocked, I repeated all the incredible things she’d just told me and suggested, lovingly, she keep her eyes on her own horizon — I told her that everyone was probably far too focused on themselves to worry about what she — and ultimately I — was, or wasn’t, doing.

It was the best advice I ever accidentally gave myself. Slowly, I started looking at my own life in a more forgiving light. How each of those imperfect life plot twists contributed to the here and now — the work I’ve done (some of it admittedly pretty cool), the people I know (literally the best and coolest in the world), and the places I’ve been (lots!), among other things. And every time, I’ve come to the realization that I’ve done okay so far. Sure, there were question marks. Sure, there were money stresses. But I’ve always been safe and supported, and though I’ve often been living a life that might not have a clear outcome, it’s always been a good one. I wouldn’t trade any of it to have gotten somewhere else a little earlier.

Recently, my dad told me that at some points when we were growing up, him and my mom were often just three paychecks away from the edge. I was shocked. We definitely didn’t grow up rich, but I never had any notion of instability — the opposite, in fact. But after hanging up and thinking about it for a little while, I was like, “yep, that makes sense,” because, well, that’s life — no one ever really has it all figured out, even when it looks like they’re hitting all the right marks.

Do you stress about being a late bloomer? Tell us @BritandCo!