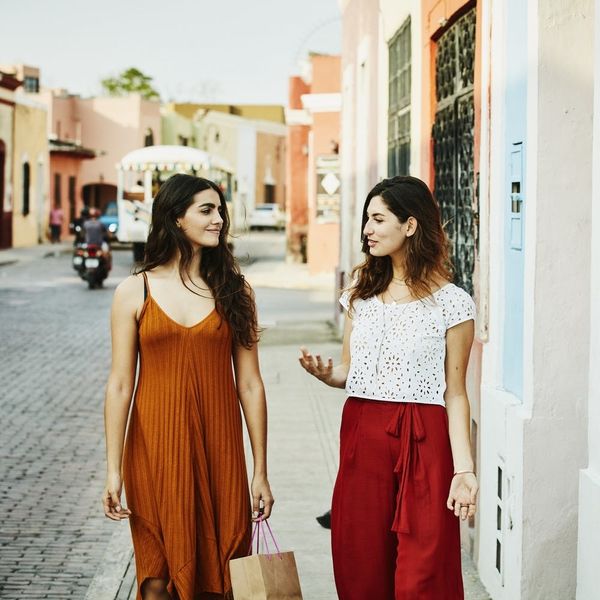 You know that feeling of dread when you have to have a hard conversation with someone you love? While awkward conversations might be a more difficult part of life, honesty and authenticity are key ingredients for any healthy relationship. But we all know the promise of growth doesn’t make the hard stuff any less painful in the moment. When tension surfaces between you and a friend, it can be helpful to have a game plan for your convo. By bringing a little extra thoughtfulness to the table, you can show your friend you really do care, even in the midst of next-level awkwardness.

Here are a few of our best suggestions for navigating some of the most difficult topics that might come up with your friends — and doing it graciously.

1. You and your friend had a conflict, and she’s clearly in the wrong. This one all depends on how you define “in the wrong.” If this is a matter of opinion — say, you and your friend disagree on politics — after you let her know you love her and don’t want these things to get in the way of friendship, suggest you two don’t get into debates in the future. But if your friend wronged you in a more personal way, like lying to you or saying something hurtful, it’s important to share your feelings so they don’t grow toxic over time. Once you both cool off, tell her exactly what hurt you without labeling her or antagonizing her. For example, instead of “You’re so mean and careless with your words,” you could say “Sometimes in the heat of the moment, you’ve said pretty hurtful things, and I’d hate for that to get in the way of our closeness. Do you think you could work on that?”

2. They owe you money. Is there anything more passive-aggressive than an out-of-the-blue Venmo request? Still, money can be really tough to talk about, especially if you know your friend is in a difficult place financially. Bring this one up delicately, assure your friend you’re not upset, and give her time to figure out how to pay you back if you think it’s an issue. It can be helpful to set a time frame or boundary and cushion it with understanding, like “Hey, I just realized not everyone has paid me back from ‘X’ event. I know money is tight for all of us, so do you think you could get it to me by next Friday, after you get paid?” If she still doesn’t come through after the deadline, you might want to have a more assertive conversation — and avoid lending her cash in the future.

3. She’s dating someone who’s clearly wrong for her. It can be so hard to watch someone you love partner up with someone you don’t. If your friend is in a dangerous or abusive situation with a significant other, don’t worry too much about awkwardness — you’re looking out for her safety. But if you simply can’t stand your BFF’s significant other, you will want to be a little more careful with your approach. Think through the things you love about your friend. Does her partner help bring those things to the surface? Or do you notice that this person has a negative effect on your friend’s personality or mental health? If so, focus on what you value about your friend rather than what you don’t like about her partner, saying something like “I’ve noticed you’ve changed quite a bit since dating this person, and I miss you!” If your friend doesn’t agree or she takes offense, let it rest. Chances are, you’ll eventually date someone she’s not crazy about.

4. Your friend is about to jump into a horrible decision. Again, if this isn’t an issue of immediate safety, remember: You and your friend are both adults. Sometimes, it can help people to learn from their mistakes. If you must speak up, try stating your concerns by pairing them with a positive. For instance, if your friend is talking about moving across the country to be with a boyfriend she’s only been dating a few months, affirm her excitement before you address your concern. “It’s so cool how adventurous you are — I wish I had your guts! But, on the very small chance your move doesn’t work out, do you have a back-up plan?”

5. She asks you if you like her haircut (or outfit), and you don’t. Who hasn’t dealt with this one? How you answer probably depends on the dynamics of your specific friendship. If you’re dealing with your since-childhood best friend and you two have always been honest about bad dye jobs and out-of-date outfit choices, state it to her gently, as she would to you. But if this is a newer friend, and you aren’t sure how she’ll take it, tread lightly. Is honesty is your top priority? Then make sure to frame it positively: “I don’t think I’d choose those boots, but I bet with the right outfit you could rock them.”

6. You need to own up to a mistake. Admitting you’re wrong is never easy, but it demonstrates honesty and humility, which are important if you want to protect your friendship. For that reason, be straightforward as soon as you can about went wrong, and let your friend know you’ll make an effort to ensure it doesn’t happen again. In these sticky scenarios, while an explanation of what went wrong is fine, avoid excuses, as refusing to own up to your wrongs will only do more damage.

7. You want to end a toxic friendship. Some friendships aren’t meant to last forever, and in many cases, they gradually fizzle out without an awkward conversation. But if you’re feeling like it’s time to cut off a friendship immediately, it’s probably better to have the talk sooner rather than later so your friend doesn’t have reason to believe you dragged it out or misled her. Rather than placing blame, let her know the things you’ve valued about your relationship and that it’s not necessarily about her, but the friendship itself. Try saying something like, “We have so many great memories, and I think you’re a really inspiring person. I just feel like we are headed in opposite directions.”

How do you deal with hard conversations? Tell us your tips @BritandCo.