How United “Reunited” Me With My Lost Wedding Ring 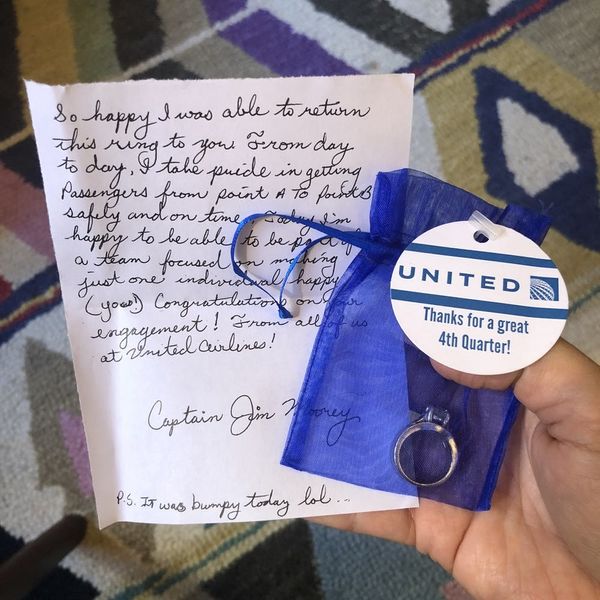 Okay you guys, ready for some feel-good news?

Last week while traveling for both work and personal time, I lost my wedding and engagement rings somewhere along my route from New York to Jackson Hole, Wyoming. I had taken them off for a TV shoot I’d done that morning in New York. (I always do this — it feels odd having a giant camera zoomed in on my ring when I’m working with my hands on set.)

I rushed straight from the shoot to the New York airport in order to board a flight to Jackson Hole. My husband and kids were planning to meet me there (from San Francisco) for an annual ski weekend that we do with friends.

I knew that my flight had a layover in Denver and that my connection time was short, only 40 minutes. Hence, I took a carry-on bag to the airport so that I wouldn’t have to worry in case my luggage was lost.

Only problem? By the time I got to the gate, there was an announcement that all of the overhead bin space was taken and I’d have to check my bag. Noooooo!

But I remembered that I had placed my ring inside of my toiletry bag — and obviously I wanted my toiletries with me in case my bag was lost as well — so I quickly unzipped my suitcase and threw my toiletry bag inside my purse before checking my bag. ‘Ah ha, now I’m safe,’ I thought.

I ended up getting to Jackson Hole on time and my suitcase even showed up too. I met up with my family and friends and didn’t think anything of my ring until it came time to get ready for bed. I reached into my toiletry bag only to find the ring missing.

Panicked, I searched all of my bags — my toiletry bag, my purse, and my suitcase — at least a dozen times, beginning to fear that the worst may have happened. It must have fallen out somewhere during the suitcase transfer. I must not have zipped my toiletry bag all the way. Oh dear god, how was I going to tell my husband? (The bigger irony? We got married in Jackson Hole nearly seven years ago, and now here we were back in a town that symbolizes our eternal love and I had no physical symbol of that love on my finger.)

He was in bed when I told him the news. I gave him the play-by-play and reassured him that I was going to figure out how to call United. I got my computer out immediately to fill out an online lost and found claim. He didn’t really speak to me, clearly frustrated, and then we both fell asleep.

After not hearing anything for several days, I tried to put it aside and enjoy my time with my family. I had given up hope and considered my rings gone. Lost forever.

But to my surprise, after the radio silence, a United representative finally replied that they had found both my rings on the jet bridge. I was ELATED. I expected them to shoot me over a FedEx or UPS tracking number, but instead they informed me they would be HAND-DELIVERING them back to me. I couldn’t believe it.

A couple days later, I received this photo of the “hand off” of my rings to Captain Jim Mooney. He was flying from New York to San Francisco and had them in his pocket just for me. When he arrived at the airport, he delivered them in a small blue bag along with the most adorable hand-written note. (Check out the PS… it’s the best.)

I lost my wedding/engagement rings last week somewhere between New York and Jackson Hole. A @United gate agent found it, put it in a safe, and then gave it to a pilot to HAND DELIVER it back to me in SF. I have a newfound faith in humanity and airlines 🙌🏼 Thanks United. pic.twitter.com/T342OGou5p

I have never been the person that wins the raffles or the lotteries, so you can imagine how lucky I felt to have the rings recovered. Not only that, but I have a renewed faith in the airline industry and in humankind — someone could have totally pocketed them and I would have never known the difference.

So thank you, United (and Captin Mooney), for showing me and the rest of us what human decency is all about.

PS: The buyer of this ring, my husband Dave Morin, is also extremely grateful and more importantly, no longer deeply annoyed with his wife. :)

Have you ever had a lost and found situation with a happy ending? Share it with me on Twitter, @brit.