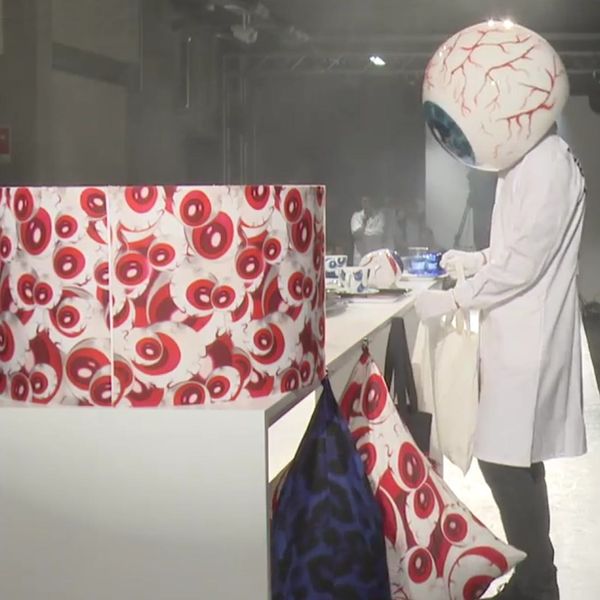 IKEA has always been our go-to shop for stylish, affordable and functional furniture, but now it looks as though the brand has decided to step outside the blue and yellow box for a few of their 2016 products. Expanding beyond the world of home goods, the Swedish decor giant has teamed up with Milan Fashion Week and two fashion designers to present their two new collaborations in a whole new way: a runway show.

Before we jump into the recap, here’s a little bit of background info about the upcoming collaborations: The two designers IKEA has teamed up with are Martin Bergström and Katie Eary. Bergström worked with the furniture brand to create a monochromatic collection inspired by India. His line consists of pieces like bed sheets, rugs, bowls and glassware. Katie Eary is a London-based designer whose aesthetic is typically super colorful, bold and patterned. She worked with IKEA to create stylish aprons, shopping bags, cushions, dinnerware and lamp shades.

As the lights went up, the show opened with three male models rocking airy, abstract pieces by Bergström. As they walked out it started like a normal fashion show would, but then all three models broke out into a sort of interpretive dance. Then more models joined them and the runway kind of turned into a giant (very well-dressed) dance party. As they wrapped up, Bergström made a brief appearance with his models to take a bow.

After that, the “IKEA Fashion Crew” came out and made some adjustments to the stage, and then it was time for Katie Eary‘s designs to make their debut. Unlike the presentation of Bergström‘s collection, Eary’s was more straightforward. Models rocking giant eyeball helmets walked the runway holding dinnerware, lampshades and pillows, which they then placed on a minimal bar at the end of the stage. After the table was set, Eary apparently decided to kill two birds with one stone, as the looks from her womenswear line (unaffiliated with IKEA) then made their debut down the runway.

While these presentations (especially Bergström’s) may give the impression that IKEA is making a leap into clothing, that’s not actually the case. Both collections are heavily focused on prints, but staying true to the Swedish brand, they are in actuality home-decor focused. But like most runway shows, IKEA and the featured designers decided to debut the concept and unfiltered spirit behind the upcoming lines (at least in Bergström’s case) rather than what it will actually consist of.

If you want to check out what these collections will look like in stores, sadly you’re in for a bit of a wait. Just like the rest of the looks debuting at Milan Fashion Week, these designer collabs won’t be available in US stores until the Spring 2016 season. Actually, Eary’s pieces are available in spring, and you’ll have to wait until the fall to score Bergström’s collection. And as far as those dance skills, sweet dance skills? Well, you’re just going to have to watch the runway show on repeat to pick those up.

What pieces are your favorite from these designer collaborations? Share with us in the comments below.