How IKEA Is Fighting Climate Change With Meatballs 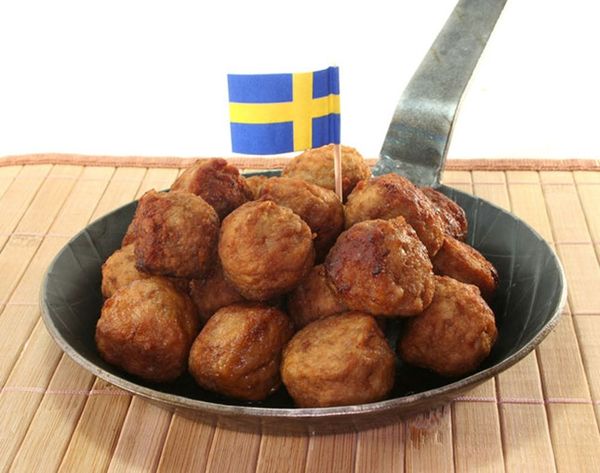 Soon you and your roomies will be able to take a trip to Ikea on #meatlessmonday and still be able to reward yourself with Swedish meatballs after discovering the Kajuta that vibes best with your living space in under an hour. That’s because the mega-store announced that it’s rehashing its recipe to make its iconic nugs of goodness beef- and pork-free as a part of a massive effort to curb its carbon footprint. Instead of using those traditional ingredients that heavily contribute to climate change, Ikea will start introducing vegetarian (not vegan :/) and chicken options to its in-store menu. Sure, the flavor might not be as robust, but it’s nothing a little lingonberry jam can’t fix.

According to a feature by Adele Peters for Fast Company, this culinary switch-up is slated to cut the 60,000 tons of carbon dioxide emissions that came from the blue and yellow brand’s kitchens last year. But the eco- friendly focus is actually much wider than just what customers are putting on their plates: Ikea’s chief sustainability officer Steve Howard told FC that it’s now pushing to make every product it manufactures and sells to customers sustainable in some way. To meet that goal, Ikea is taking aggressive strides to up the quality of its notoriously short-lived products while maintaining its affordable price point, slinging greener items like LED lightbulbs and even solar panels along with a slew of other measures.

Ikea’s aim to be a more sustainable global mass retailer is admirable, but we can’t help but think the announcement is a bit of a Beyonce-gone-vegan moment. You know, like how the singer was chompin’ on Beyond Meat during her 22-day challenge while wearing cowhide-print tops and leather leggings (Oh Bey, you didn’t really get it, did ya?!). So back to Ikea: FC says that food served and sold in Ikea stores = just 2% of the company’s total carbon footprint, yet it reportedly uses almost ONE PERCENT of the entire world’s commercial wood supply to make the furniture urban dwellers like us love to buy and hate to build. That startling statistic really puts its meatball effort into perspective, and makes us seriously hopeful that when Howard says the folks at Ikea are “100% behind” a completely green overhaul, they continue to make real progress in all aspects of their business.

To Ikea’s credit, it’s actually doing good with wood RIGHT NOW. Peters says in the comments under her article that Ikea plans for 50% of all the wood they buy to be either recycled or legally and sustainably sourced in just three years time. So you + your conscious can rest easy in your Ekerö knowing that while the pace may be slow — like one meatball at a time slow — there are big green changes coming to an Ikea near you.

So what’s your take on Ikea’s promise to become more sustainable? Oh and we also want to know, will you still eat its new vegballs? Tell us in the comments below.