20 Jambalaya Recipes to Spice Up Your Life 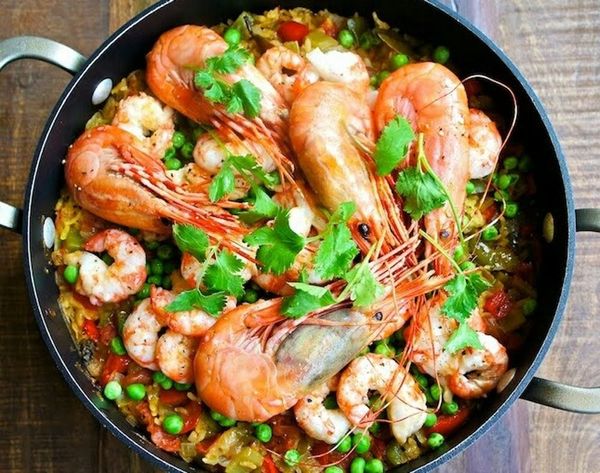 When you think of jambalaya, you think of a hearty and delicious meal with a lot of heat. Born in Louisiana, jambalaya contains chicken, sausage, shrimp, vegetables and rice. Don’t be intimidated — jambalaya has a lot of ingredients but it’s so, so easy to throw together. Once you taste these delicious dishes, you’ll feel like hosting a Mardi Gras party! Here are 20 jambalaya recipes from traditional to innovative to spice up your life.

1. Spicy Chorizo Jambalaya With Sweet Potato Rice: What’s so terrific about this recipe is how it uses slices of sweet potatoes pulsed in a food processor instead of white rice. It saves on carbs AND adds a healthy boost of vitamins. This is still a jambalaya though, and it’s full of spice with chorizo and cajun seasoning. (via She Knows)

2. Cajun Chicken + Sausage Jambalaya: Made with a whole chicken (as well as sausage), this dish is a terrific option for a laid-back dinner party. It packs a lot of heat thanks to cayenne pepper and Tabasco. (via The Gallery Gourmet)

3. Shrimp ‘n’ Spinach Quinoa Jambalaya: Spinach and quinoa in a jambalaya? You betcha! It might be a healthier option, but it’s still hearty thanks to shrimp and sausage. (via Emily Loves Food)

4. Spot Prawns + Rice: A delicious meal that can be made in one pot AND in one hour. This dish is big on prawns but there is also a lot of veggies including onions, celery, green and red peppers, jalapeños and peas. (via Sea Salt with Food)

5. Vegan Jambalaya: Veganize your jambalaya with vegan chorizo sausage and a boat load of veggies, including asparagus, peppers, mushrooms and summer squash. (via Namely Marly)

6. Jambalaya Kabobs: All the heat and deliciousness of jambalaya in a neat and tidy kabob. Each skewer contains chicken, shrimp, sausage and peppers dashed with cajun seasoning. (via Foxes Love Lemons)

8. Shrimp, Crawfish + Scallop Jambalaya: Another one-pot wonder, it tastes great cooked in a cast iron skillet or slow cooker. There is a long list of ingredients, (including Southern favorite, crawfish,) but the grocery shopping is well worth it! This is one flavorful dish you definitely don’t want to miss out on. (via Call Me PMC)

9. Shrimp + Sausage Jambalaya: A jambalaya with a bit of a twist thanks to asparagus, chives and cumin, it’s packed full of flavors with the addition of shrimp, sausage, cayenne and smoked paprika. The best part about it? You can whip up this dinner in less than an hour. (via Petite Panini)

11. Tex-Mex Jambalaya: Jambalaya with a Tex-Mex spin! What makes this recipe a bit different is its inclusion of okra and corn. It brings the Tex-Mex heat with cumin and chili powder and is jam packed with jambalaya favorites chorizo, chicken, shrimp and lobster tails. (via Ask Chef Dennis)

12. Ragin’ Cajun Jambalaya: If you’re looking for an easy recipe, this one is for you. Throw everything into a slow cooker, (hold the shrimp) and let it simmer for several hours filling your home with its delicious fragrance. About 20 minutes before you’re ready to eat, toss in the shrimp. Serve with hot sauce to make sure it’s a true ragin’ cajun jambalaya. (via Food)

13. Jambalaya Burger: OMG! This burger has everything. The main attraction is grilled chicken breast, but there is also turkey sausage, shrimp and cajun seasoning. (via Men’s Fitness)

14. Jambalaya: What sets this recipe apart from the others is all the colorful veggies that are included — celery, white and green onions, jalapeños, tomatoes as well as the stoplight pepper trio (red, green and yellow peppers). (via Gimme Some Oven)

16. Jambalaya With Chicken + Chorizo: Your meal will gain additional flavor from using bone-in chicken. There are a couple of extra steps involved but it’s still all cooked in one pot! (via I Will Not Eat Oysters)

17. Gumbo-laya Stew With Spicy Sausage, Chicken + Shrimp: A hybrid between gumbo and jambalaya, this stew is hot, hot, hot! Served with fragrant garlic rice, this dish is something truly unique. (via The Cozy Apron)

18. Jambalaya: The quintessential New Orleans recipe gets a healthy makeover thanks to a few subtle changes including turkey sausage and brown rice. The best part? Each serving is under 500 calories. (via The Foodie Physician)

19. Cheesecake Factory Cajun Jambalaya Pasta Copycat: Looking for something a bit lighter? This dish has everything you love about jambalaya, like chicken and bell peppers, but is served over whole wheat linguini. (via No Diets Allowed)

20. Gluten-Free Jambalaya Breakfast Casserole: Yes, you can have jambalaya for breakfast! Combine eggs, Monterey Jack cheese, bell peppers and rice then bake for 30 minutes. (via McCormick)

Are you a jambalaya fan? What’s your favorite way to prepare it? Let us know in the comments or on Facebook.