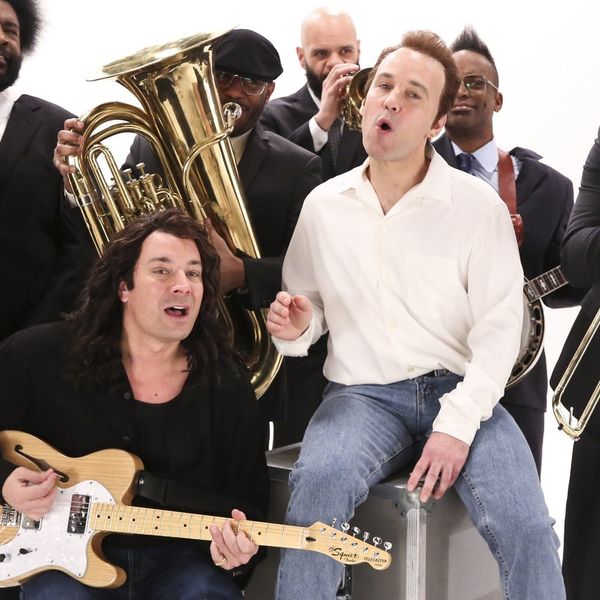 If you grew up in the ‘90s, there’s a good chance you’ve heard Go West’s iconic tune, “Wishful Thinking.” The catchy little ditty kicked off the intro to Pretty Woman, setting the scene as Richard Gere’s 1989 Lotus Esprit cruises the streets of LA, and apparently, Jimmy Fallon and Paul Rudd are fans — big ones.

The actual music video for the song is something of a hidden gem. Not only does it riff the film that made it famous, with a Vivian Ward lookalike opening a limo door to reveal the musical duo of singer Peter Cox and rhythm guitarist and backup vocalist Richie Drummie (who make way with the unbridled shimmys almost immediately), but it quickly takes an unexpected turn, with random images of ballerinas, hockey players, and some serious dad jeans coming into play.

Things get even stranger from there, with a mariachi band, a head-standing elephant (yes, you read that correctly), and zebras making their way onscreen, and the dance moves — well, those, we can’t even begin to describe.

Now, the talk show host and Avengers: Infinity War star are giving this little nugget the due credit it deserves, recreating their own hilarious version of the music vid.

Their spoof, which they debuted on last night’s episode of The Tonight Show Starring Jimmy Fallon, is spot on, with Rudd seriously COMMITTING to Cox’s erratic shoulder jerks and wrench singing and Fallon playing the part of the long-haired, smiling Drummie to a tee.

While they left out the acrobatic animals, it’s no matter — it’s still close enough to have us seriously LOL-ing.

It’s not the first time the pair has teamed on to take on a classic — you might recall their Styx video recreation from back in April. Fallon also teamed up with Jack Black back in May for a remodeled visual of Extreme’s “More Than Words.”

Fingers crossed it won’t be the last, either!

What do you think of the guys’ remake? Sound off over @BritandCo.

Nicole Briese
Nicole is the weekend editor for Brit + Co who loves bringing you all the latest buzz. When she's not busy typing away into the wee hours, you can usually find her canoodling with her fur babies, rooting around in a bookstore, or rocking out at a concert of some sort (Guns N' Roses forever!). Check out all her latest musings and past work at nicolebjean.com.
90s
Pop Culture
90s Music Nostalgia TV