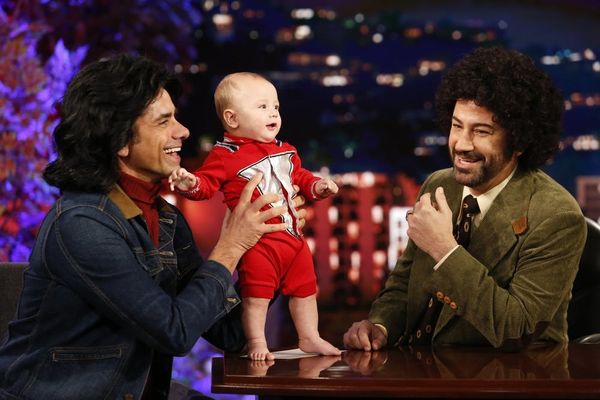 John Stamos is one proud dad. The Fuller House star appeared on Jimmy Kimmel Live! on Wednesday, October 31, and brought along a very special guest — his son Billy, in an adorable Halloween costume, no less.

After spending some time catching up on life events, like his February wedding to Caitlin McHugh, the actor pointed to some special guests he had in tow and brought out his six-month-old baby boy.

The show was ’70s-themed in honor of Halloween, and little Billy was dressed as Robin Williams’ iconic TV character Mork, from the ’70s sitcom Mork & Mindy. McHugh, who was standing side stage, was dressed as Mindy.

“Isn’t he just the most beautiful baby?” Stamos beamed. “I’m so in love.”

Kimmel agreed with the proud dad, saying, “This is the cutest baby I’ve ever seen. You gotta make more of these.” Stamos insinuated that he’d like to, but that having an infant to take care of has been “cramping his style.”

Since Stamos became a first-time dad back in April 2018, he’s been candid about how emotional the experience has been for him. On a recent appearance on Live With Kelly and Ryan, the You actor even teared up while looking at photos of his son, whom Stamos named after his dad.

“I miss him,” Stamos admitted when Kelly Ripa noticed he was getting emotional. “This is the longest I’ve been away from him. I’ve been waiting my whole life for this. I’m so happy, I’m so happy.”

What did you think of little Billy Stamos’ Halloween costume? Let us know @BritandCo!