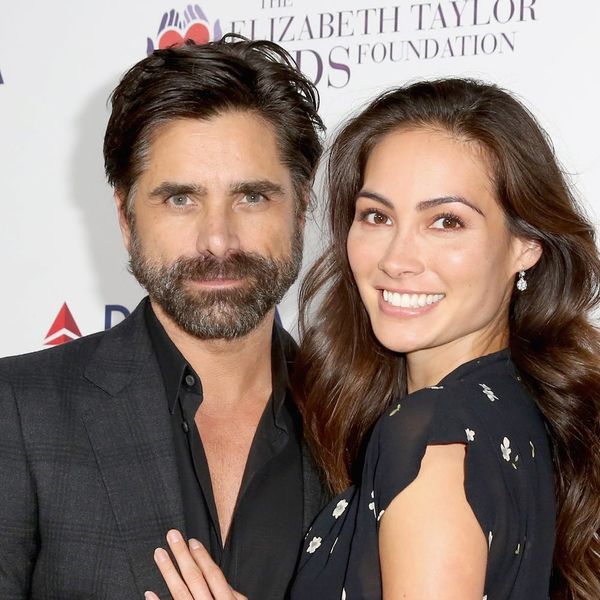 The RL Uncle Jesse is officially a married man! The 54-year-old Fuller House star and his blushing bride, model Caitlin McHugh, said “I do!” on Saturday with a short afternoon ceremony at the Little Brown Church in Studio City, Los Angeles.

The couple, who has been together for about two years and is currently expecting their first child, exchanged vows in front of a reported 50 guests.

While the groom wore a classic tux paired with his signature ‘cool guy’ shades, the The Vampire Diaries actress looked stunning in a strapless white ballgown with a big tulle skirt, all the better to hide her growing baby bump. She accessorized with a big white bouquet plus delicate diamond earrings and a statement-making diamond hair clip.

Though there’s no word on whether or not Stamos sang “Forever,” the newlyweds did have quite the shindig, reportedly driving off in a white Rolls Royce before meeting up with friends and family at Stamos’ home in Beverly Hills for the afterparty.

As E! reports, they also gave an adorbs nod to their romantic engagement in front of Disneyland’s iconic Sleeping Beauty Castle (!!) back in October by placing a giant letter “D” in one area, written in Disney’s signature font.

I asked...she said yes! ...And we lived happily ever after💍

While the unforgettable event seemingly went off without a hitch, the couple had a less-than-stellar evening the night before, as McHugh’s Beverly Hills Hotel room was robbed of approximately $165,000-worth of jewels. The mama-to-be was not in her room at the time the incident took place.

We’re so happy to hear that she’s okay, and that she didn’t let the unfortunate event rain on her parade.